They met on the third day of the Marriage Reconciliation Boot Camp, by the dumpsters where people smoked forbidden cigarettes, and it was love at first sight.“I hate this place,” he said.

“Travers Houghton. What a miserable prick.”

“And he’s fat. If he wants to convince me he knows the secret of life he should skip a few meals.” She blew out a tight cone of smoke.

She smiled at that. “Sounds like grounds for divorce, right there. Intolerable cruelty. Irreconcilable differences. Or whatever.”

“She’s having second thoughts, believe me.”

“Does she know you’re smoking?”

“I was going to bring mouthwash but we never kiss anyway.”

“Which is all supposed to change now,” she said.

He looked across the half empty parking lot to the woods. “I wonder what the statistics are, at this place. I mean, does this shit ever help anyone?”

“I don’t know. Now you’ve got me thinking about divorce. That would be a quick fix. Half of what we’ve got would set me up for life.”

“That’s the difference – you’d be getting half. I’d be losing half.”

She shrugged. “So what? You’ve got your share and you’re out.”

They smoked in silence for a few moments. Rain clouds were piling up at the northern edge of the sky. No spousal intimacy bag races today.

“So,” she said, dropping the last of her American spirit and stepping on the butt, “When was the last time you got laid?”

“You’re telling me you cheated on your wife?’”

“Sorry, but it’s true. You would have made a move already.”

“Because you’re so attractive?”

“Because that’s what you’d do. People like you. Players.”

“My aura of smug virtue doesn’t put you off?”

She laughed. “You’re not virtuous. You’re not even faithful, not really. Except by default. If an attractive woman came on to you that would be it, buddy. You’d be gone. One kiss and out. You’ve been standing on the brink for years.”

He dropped his own cigarette, crushed it with the toe of his shoe. He stared at her.

She took two steps and kissed him, mouth open, arms twined around his back. He fell into the kiss as he remembered falling into swimming pools on hot summer days when he was a kid: the bliss of submission, the thrill of immersion, the soundless splash into enclosing silence.

Finally he had to come up for a breath.

“I want to go somewhere and fuck you,” he said.

She smiled. “Pushover. I knew it.”

They wound up in an empty room on the third floor of an unused dormitory. The college rented out the campus during the summer to organizations like Travers Houghton’s Boot Camp. The bed was just a bare mattress on a plank. They didn’t care. They had no idea how long the Testimonial Assembly was going to last and they didn’t care about that either. As long as couples wanted to stand up and ‘speak their hearts’ to the crowd, they were safe. It could take all day.

Both of them were sure they wouldn’t be missed – especially by their spouses. This place made you glad for a few minutes to yourself – like trying to cure claustrophobia by trapping you in a stalled elevator.

After the first frenzied missionary style slam she rolled over and said “What does your wife refuse to do?”

“She must have been willing to fuck you at some point. Did she give you blow jobs?”

“How do you sort of give a blow job?”

He propped himself up on an elbow, turned on his side to face her. She was alert, bright-eyed, gorgeous. And impossibly, supernaturally easy to talk to.

“She treated it like Mount Saint Helens. An interesting spot to visit, but make sure you get the hell away it before it goes off.”

“Oh. The blow job that turns into a hand job.”

He took a deep breath and nodded – more with his eye-brows than his chin, which was resting on his palm. “I only had one real blow job – some one night stand just before the girl got married. Those were my favorite one-night stands back in the day. No loose ends, no hurt feelings. You get to be the last fling. Anyway. She kept sucking as I came, harder even. Is this too …”

“No, no, I’m fascinated. Nobody tells us this stuff.”

“Well … they always talk about swallowing, as if that was some big deal all by itself, or some Male power trip or something. Turns out swallowing is incidental. If you’re sucking that hard you can’t help swallowing. And for the guy … the whole feeling is so much more intense. It’s insane, it’s like she was pulling my balls out through my dick, just convulsively draining everything and – I don’t know. I never tried to describe this before. It’s like crack, except I never tried crack. It’s what you hope crack would be like, what it ought to be like since people get so fucked up on it all the time. But I only had one time. That girl got married the next day and I never got a real blow job again.”

“But what can I do for you? What won’t your husband do?”

“Well … you could take me to a Sandra Bullock movie.”

He laughed. “You drive a hard bargain.”

She paused. “But you promise”

“Anything. A double feature.”

“All About Steve? Miss Congeniality?”

“You really are. And for some reason I find that incredibly sexy.”

So she slipped the rest of the way down and gave him the totally committed blow job he’d been longing for since he was twenty-two years old and it was everything he remembered and more and when they slipped back into the auditorium each of them stood up and gave heartfelt declarations of love for their spouses and they were so convincing the other couples gave them standing ovations.

The rest of the week was all sex and subterfuge: slipping out of bed when everyone else was asleep and making love on the lawn of the big quadrangle, pleading illness or (best of all) a headache for a secret rendezvous on the bird watching path behind the Chapel.

Once they walked down the steep hill into town and ate an illicit lunch at the bad Mexican restaurant on Main Street, drinking 2-for-1 margaritas and ducking their heads when anyone they knew passed the big picture window.

“So what went wrong?” She asked him, over the second slug of crushed ice lime juice and tequila. He pushed his cooling enchilada across his plate. “I haven’t been able to give her the life she expected. She doesn’t get to live in the manner she wanted to become accustomed to. Like they say in celebrity divorces. When the woman is trying to explain why she needs ten thousand dollars worth of cut flowers every day.”

“It’s money and couches and new cars and a bigger condo and the freedom to travel, and no stress about her spending habits. I was supposed to take the price tags off the world for her.”

“So all you need to do is win the lottery.”

“Until she spends it all. And believe me, she can spend.”

“It’s just the opposite for me,” she said. “I just wish he could do what he wants. Really paint for a while try to get a gallery. Instead of the crap he does. Story boards. Free-lance art directing for d-list agencies. Drawing dancing teddy bears from some peanut butter account. They’re all going to cgi now, anyway. And he can’t even open his own e-mail.”

“Say – I don’t know. You want him to be better. Be all that he can be, that’s appropriate for boot camp. An army of one.”

“What a weird ad campaign. I was hoping for an army of two.”

“Whatever. You want him to be happy. Tell him that.”

“Or I could just send a Hallmark card.”

“I like mixing them up – sending a nice condolence card when people get married.”

She laughed. “Or a get well soon when they start a new job.”

“He never even tries to make love any more.”

She smiled. “Maybe all it takes is one good blow job.”

In between their assignations they duly played all the role-playing games and the touching games and the confessional games; they allowed themselves to be video-taped and sleep-deprived. They stripped naked in front of stranger and cried in front of stranger and confessed their sins and everyone forgave everyone else and said the worst thing they could think of and shared their most bitter regrets and most shameful secrets and then everyone got one good night’s sleep and they were on their way back home.

He met her on the steps of Dewey Hall. For a moment they were alone. No one was watching them. He set his suitcase down.

“You’re my last fling and I’m off to get married?”

“I don’t know. It was a tough week but I think it worked.”

“Did you fall in love with your wife again?”

“Did you fall in love with your husband?”

They both nodded, smiling.

“So the role playing worked,” she said.

“—as long as we threw ourselves into it.”

“I hate admitting they were right.”

Travers Houghton strode past and lifted one fist, his signature greeting. They returned the salute.

“Because he really is such a pompous asshole.”

“A rich pompous asshole. Thriving by word of mouth.”

“I guess. But first I want another sublime blow job or two.”

“And we’re going to have the complete oeuvre of Sandra Bullock on our netflicks queue.”

He bowed his head, nodding in mock defeat.

When he looked up she was smiling. “You’ll do some real painting, too, won’t you, Mike? I’ll model for you. Any pose you want.”

He pulled her to him and kissed her.

“I feel like marrying you right here and now. Houghton is an ordained minister.”

She put a finger to his lips, shook her head.

“Been there, done that,” she said.

Then she picked up her bag, took his hand and started lightly down the steps to their car. 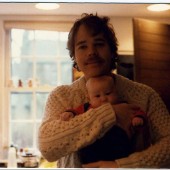 Steven Axelrod is the author of Nantucket Sawbuck and Nantucket Five-Spot, a Poisoned Pen Press series of Nantucket-based mysteries featuring poetry-writing police chief Henry Kennis. Steven holds an MFA in writing from Vermont College of the Fine Arts and remains a member of the WGA despite a long absence from Hollywood. His work has been featured on various websites, including the literary e-zine Numéro Cinq, where he is on the masthead. His work has also appeared at Salon.com and The GoodMen Project, as well as the magazines PulpModern and BigPulp. A father of two, he lives on Nantucket Island, Mass., where he paints houses and writes, often at the same time, much to the annoyance of his customers.