The carnival smells of butter and sugar and gasoline, all melded together by heat. The combination makes me giddy, but I can tell it will give me a headache, like the day Mrs. Stewart repainted the judges’ booth during swim practice. In the poorly ventilated basement, the fumes had nowhere to go but our heads. I avoid breathing in too deeply.

With a lurch and a blare of a buzzer, the half-egg we’re sitting in starts spinning. It’s not long before we’re a blur, a shrieking tornado. I can’t open my eyelids or help that my hair flies side-to-side. Or that my thin 13-year-old thighs keep slipping out from under Joe’s palm and crashing into Ryan’s jeans.

The cheap, plush animals that I don’t want, but really do, hang glowing underneath strings and strings of fat yellow bulbs. Ryan and Joe throw baseballs at bottle pyramids. The men in straw hats sell them rings to toss and seats at water gun booths, and I hold the popcorn and jump up and down when horse #5, Joe’s horse, pulls into the lead. I look over at him, but he’s completely immersed in the game. Not Ryan, who is slouched back. He’s lowered his gun slightly, so that the stream is cut off at the bottom. I feel embarrassed for Joe. I want to tell him to stop trying so hard. When he wins me the giraffe, a gigantic thing with an impossible neck, Ryan looks at me as if to say I would have won you the panda bear, the biggest animal on the wall.

There’s a boy at the dunk tank who looks like Ryan, tall and thin with short, dark hair. His father agrees to sit up on the collapsible platform, and we squeeze in to watch. I stand up on my toes and see the boy take a baseball and warm up his arm, which warms up the crowd. Someone starts chanting, “Dunk him! Dunk him!” and we all join in. The boy takes his stance, serious but confident. He winds up and launches a fast ball that hits the target with a mechanical smack. Everyone’s ecstatic as the dad plunges into the tank. Water splashes high and I smell chlorine.

I ask Ryan and Joe if Alyssa ever showed them her trick. I lift up my forearm and lick it. “Smell,” I tell them, holding out my arm and pointing to the wet patch of skin gleaming under the carnival lights. They both grab me at once. Ryan lets go so Joe can smell first. I’m both relieved and disappointed. “It smells like chlorine,” Joe says. He hands Ryan my arm and licks his own. Ryan’s fingers completely encircle my wrist and he looks at me like he did after the water gun game, with promise. He inhales and says, “Nice chemical skin.”

I sit in the middle again on the Ferris wheel. I have to hold the giraffe between my legs to make space, propping my feet up on the opposite side of the cart so my knees point toward the sky. The red cart climbs and climbs, but slowly, slowly, and all the while the organ from the carousel softens out and the wind whispers in my ears and on my neck. Joe’s fingers twist around mine, and his thumb caresses the back of my hand, between my wrist and my knuckles. Joe knows I like when he does this. I look at him and smile.

But then, to my surprise, I feel fingertips, Ryan’s fingertips, sliding softly, secretly under my skirt. His fingers move back and forth behind my thigh, tracing and retracing the same inch of skin. I feel dizzy, like I’m back on the tilt-a-whirl, but this time I don’t want it to stop.

I look over at Ryan. He’s staring at the giraffe, so that’s what I do too. Its head is rocking in time with the gentle swinging of our cart. It’s like it’s nodding at me, saying yes. The taut stitching of its mouth creates the illusion of pursed, sucked in lips. Ryan leans over me to say something to Joe, and I smell his skin, more animal than chemical. It blends into the carnival air, and I breath in deeply. We’re at the top of the Ferris wheel now, about to round our way down, but I’m still climbing, climbing up into the summer-night sky. 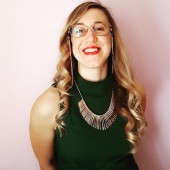 Christine has studied fiction and poetry in the workshop setting. She reads 5-10 books a month, and stands on her head for 5-10 minutes a day. She lives and works in the Washington, D.C. metropolitan area, where she writes about STEM education, civic engagement, and digital media.