I didn’t want to take the chance of passing down these goddamn genes. My genes. The ones that my mother and my father have so graciously bestowed on me. The genes of addiction, of depression, and of an eating disorder. The DNA that manifested itself in twisted and destructive ways; cutting my forearms and my belly, and multiple suicide attempts — all have left me with the inability to sustain a physically and emotionally intimate relationship.

I am a fifty-one-year-old woman, single and childfree.

I am a mirror image of a collage of my parents. Their failings merged within me and I found myself crumpled on my bed in my pink-and-white bedroom as a ten-year-old girl, clutching my Raggedy Ann and Andy dolls, as the scotch my father consumed with his dinner erupted into a cruel and sarcastic tirade.

As a thirty-year-old woman I found myself collapsed on a bed in a room in a psychiatric hospital clutching a teddy bear named Elliot left over from my freshman year at college. I had nothing else to hold. I didn’t care what color the walls were and I didn’t care that the sheets were newsprint rough.

I thought about Robin and Allison and Ellen and Melissa, my friends from high school who had gone on to private colleges where they had met boys who had grown into men while they had grown into women. While I sat on my hospital bed, fondling Elliot, they lay with their husbands on 600 count sheets making healthy, sane babies.

Something I knew I could never do. 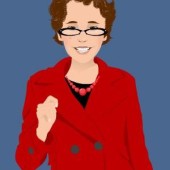 Gerri Luce, who writes under a pseudonym, is a licensed clinical social worker who practices in New York City. She writes on the subject of mental illness and recovery. Currently she is working on her second book which is a sexual coming-of-age memoir with a twist. She lives alone in New York with her cat Zoe.