“The tag says it was made by people with disabilities.”

“What kind of disabilities?” Lew doesn’t like the sound of this. He doesn’t know why his wife likes to shop at these for-charity craft stores. Always filled with such homely, rough-hewn things.

Sarah shrugs. “I’m sure it’s nothing serious. A bad sense of direction? A tin ear?Colorblindness?” He can tell by her smile she’s making one of her silly, teasing jokes.

Lew wonders if that’s all supposed to mean him. Each is a shortcoming Sarah’s at one time or another accused him of.  “Colorblind?” he lobs back. “It that why they painted it this dull gray?”

“I like the gray. I think it’ll look nice with the pink in Petra’s room.”

It isn’t the sort of rocking horse he imagines his daughter having. Maybe one notch up from the broom handle he used to pretend to ride as a kid in Yuma. The one he’d used to swing at baseballs, shoot at lizards, and to run his younger brother through. What he wants instead is something sleek and showy. A stallion to outrun all shabbiness, cheapness, and incompetence. The kind he can finally afford now: one with real reins and a real saddle, upholstered in real hide.

“It has eyelashes,” Sarah offers, fluttering her own.

Lew takes a step back from his wife, just to make it clear he’s unmoved. She always calls him “prickly” when he’s like this, but right now he doesn’t care. “You see that as a selling point?”

“Poor beast,” Sarah sighs, running her hand along the horse’s painted-on mane, over its thin plywood ears, along the section of dowel jutting through its temples, and across its broad, saddled back.

“Ma-ma,” says the doll when you tip her. Sarah remembers making her drink from a bottle. Went straight into a rigid hole, dead center in her plastic lips.

“She pee-pees too,” says Grandma. Her voice is low and pliant, all its old shrill strictness tucked away in hiding. “Piddles right into a diaper. Your mother can tell you about that.” Petra laughs.

Sarah stands close to her pink-cheeked, brown-eyed daughter. She can’t believe her mother kept the doll so long. Past the time Sarah herself was no longer welcome in the house. Past the time she was welcomed back again.

Petra deserves a new doll, the kind Sarah herself always wanted.  Something soft and winsome. Clean cotton and bright yarn stitched together by hand. A ragdoll made for cuddling, not a hard, plastic one that exists only to be force-fed.

Sarah takes the baby doll in her hands, squeezing its scuffed body. It breathes out a puff of old, trapped air, carrying the stink of ancient milk and Dr. Pepper and orange juice, making everything in the room smell sour.

“It’s a different kind of metal. Brass. My parents gave it to me as a birthday present when I was your age. Look inside.”

Petra does not know how she is supposed to look inside a necklace. But before she can even try, her mother is fiddling with it, wiggling into deep parts of it with her nail.

It opens in her mother’s hand like a door, one side swinging away from the other on a tiny hinge. Inside Petra sees two faces, photographs in black and white. Her parents. But her father’s beard is gone and his hair is cut so short it sticks up from his head. His eyes are dark and shiny. Her mother’s tiny paper face looks pale, almost sleepy. Her hair is gathered away in a giant barrette.

“I used to wear this locket in college when your father and I were dating. But you can put in new pictures if you like. Anything you want. Cutouts. Drawings.” Her mother studies Petra’s face, same as she does when she asks if she’s feeling flu-ish, same as when she wants to know if she had a good time at Grandma’s house. “You can choose just for you now. Not like when I was growing up.”

She sits Petra down at the low table where she eats her afternoon carrot sticks and peanut butter and crackers. She brings out crayons and construction paper. Glue and a little tube of sparkles. Scissors and stickers and magazines. Petra can tell her mother wants her to be happy in a certain kind of way.

“If you make something small,” says her mother, holding her fingers apart a tiny distance, as though measuring an acorn. “I’ll help you cut it so it fits.”

She takes the hinged part of the necklace in her hands again and starts pulling at it and wiggling it with her nail.

“Almost done, sweetie.” Petra hears a click, and then another. “There.” Her mother takes her hands away. Two small metal rings sit in her cupped palm. They gleam in the sunlight like electrical wires, although they are as flat and thin as paper.

She holds one up to her eye like a spyglass. “This is what keeps the pictures in.”

Petra takes the rings in her own hands. She peers through one. The other, she sticks on her thumb. She looks around the room through the bright, metal circle, pausing on her two new toys:  the fancy leather rocking horse with the hard saddle and scratchy mane, and the droopy homemade ragdoll with frayed braids and crooked, sewn-on smile. She doesn’t know why it’s so important for her to like them. She hopes Grandma will buy her that princess doll. The one she isn’t supposed to want.

She touches the chain fastened around her neck. Her mother’s eyes follow her every movement.

You can choose anything.

Petra fingers the open locket. She reaches past the crayons and magazines for the sparkles.

Her parents’ paper faces fall and flutter to the floor. 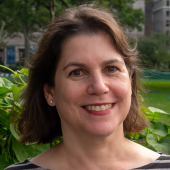 Nora Maynard's recent work has appeared in Salon, the Ploughshares blog, The Missouri Review blog, Drunken Boat, Necessary Fiction, and The Millions. Nora has received fiction fellowships from the Millay Colony, Ragdale, Ucross, Blue Mountain Center, and The Artists' Enclave at I-Park, and is a winner of the Bronx Writers' Center/Bronx Council on the Arts' Chapter One Competition. She is a member of the Board of Trustees for the Millay Colony for the Arts. She is completing a novel, Burnt Hill Road.