Twenty years after college, Penny and Dave turned up in Miami. Back in dorm days, they used to phone the always sober and perpetually single Lucky Tang to pick them up on weekend nights when they got too stoned or stranded. Now, Penny and Dave had cars of their own, plenty of money (somewhat mysteriously), and each other. At their fourth dinner together since their reunion, they confided to Lucky, “If only we could have children.”

Lucky’s cousin in Shanghai knew someone. The father was the star of the pole toss act for the Cirque De Soleil’s Vegas show. The mother spun plates on a stick while perched on a stack of chairs balanced on the bottoms of a man’s feet. Unable to work while pregnant, she went back to China. When news of a girl reached him, the father followed the troupe to Geneva and took up with a one-armed-Polish unicyclist who used to juggle hatchets. Lucky’s law partner drew up the adoption papers for Penny and Dave. Months later, Lucky admired e-mailed photos of a balding Dave, a thicker but still red-haired Penny, and their Chinese baby. He’d never met the baby–he was visiting family in Hong Kong the afternoon of her “welcome home” party.

When they called on a Friday night, Lucky was alone as usual, watching a video. Penny, once the prettiest girl in the dorm, held the black-haired baby and Dave pushed a stroller and carried a bag crammed with diapers and formula.

“Do you remember Katie Klein from junior year? She turned up at Mommy and Me class. When she saw our baby, she thought I’d married you.”

“Glad to have played some role in making your baby possible,” Lucky told her, hiding his smile.

“Well, that’s sort of why we called,” Dave said.

“Two nights ago, she was doing a handstand on the rail of her crib.”

“But she’s not walking yet.”

“We haven’t slept in weeks,” Penny sobbed. “She stands on the back of her high chair balancing her bottle on her forehead. She’s going to hurt herself.”

“Completely insane, we’ll die if she has an accident. When she falls, she never cries.”

Penny and Dave looked away, then at each other, and then exchanged a nod. Penny asked, “Can we get a photo with Uncle Lucky?”

When he agreed, Lucky thought she meant with the baby and her. He held the baby alone while Dave snapped an iPhone photo. When the baby nestled her head against Lucky’s shoulder, Penny and Dave made “ooh” sounds. Before he could hand her back, the couple ran out the door. The baby squirmed out of Lucky’s arms, then executed a perfect twisting-front handspring over the stroller. Her head cleared the steel bar by less than an inch before she landed on the diapers where she gurgled contentedly. After applauding, Lucky went to the window to watch Penny and Dave’s car squeal away.

“We’ll learn Chinese together,” he told the baby as he imagined searching crowded Shanghai streets for a woman with perfect balance. 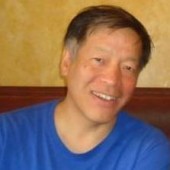