I treated her to borsch. Borsch was fine though not made by me. The borsch was cooked by another woman. The woman had a desire to make it. Whenever she cooked borsch she thought she was in love with me. She didn’t go on well with her husband and she posed as a possible good wife to me. I disliked the borsch beforehand when she’d asked for some citric acid for it. You’d better slice a lemon in. We need proper ingredients, – she announced.

In order to be a nice husband to her, I went out for the acid. I can be a good one sometimes.

And that girl was quite different. In silence she was taking borsch, for one is not supposed to make love immediately. She uttered no word. She just sat neatly on a chair and was having borsch in an ordinary way. She never asked me a question. That’s why we parted later on.

The borsch had ripened perfectly well, it was as strong as beef tea, flavored and particularly red. She tasted it and was aware that we were to make love. And I was aware of it too. That’s why she came up and was eating my borsch. I didn’t cook it myself but she never asked.

I don’t remember if there were any olives in it. As far as I know, there shouldn’t have been. The fact that she didn’t ask me any questions vexed me, the same as how there were no olives in the borsch.

We didn’t drink up, but what for? There was no reason to be in a fog. Sober I liked to watch her going mad in bed, slowly and steadfast. And step by step as ever she went crazy and made me believe that it was on me to recover her mind. She was conscious yet breathed somewhat effusively. But I got used to her breathing in such a way when she was making love to me, and then there was a what felt like an earthquake.

Smoothly we flew off, birds darting off a twig, still in touch with each other. Then in ten minutes or so we woke up enlightened.
– You smile when falling asleep…

She was the only one to make me feel this way. Like a child high on a tree, feeling so sweet and scared at the same time, not knowing how to get down.

It was inexplicable how she could stand up calmly and put on her clothes after all that. She dressed herself up slowly and neatly, little by little, hiding the light she had filled me with. The kind of light shed from a nun’s face but she was not a nun. She was my woman.

She was always the only woman of mine, but then she didn’t ask me about it. Slowly she dressed and slowly she went off the peculiar light she filled me with. We were slow to walk down the dark stairs. There was no need to join hands; in the dark, the sense of each other still lasted.

Behind my shut door a radio started broadcasting “Aum senruke” series. It was about everlasting love, rejection of wrath and the way one chose. Еvery Thursday, late in the evening…

In half a year the broadcast ceased. 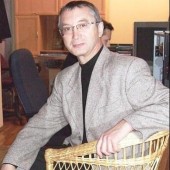 Valery Petrovskiy is a journalist and short story writer from Russia. He is a Chuvash State University graduate in English and has completed graduate work in journalism at VKSch Higher School, Moscow. He has been writing prose since 2005 and is the author of about 100 short short stories. Some of his prose has been published in The Scrambler, Rusty Typer, BRICKrhetoric, NAP Magazine, Literary Burlesque, The Other Room, Curbside Quotidian, DANSE MACABRE and WidowMoon Press in the USA, and one in Australian Skive Magazine as well. He lives in a remote village in Chuvash Republic, Russia with his elderly mother, dealing mostly through internet as a freelancer at local, national and foreign magazines.