We peeked over the top of the hill in my mom’s old sedan, the sky a nauseated yellow.

“The enemy in our sights,” Mom said. We could see the tornado in the distance, a witch’s gnarled finger touching the ground from the clouds. The world now wider in scope. I rolled down my window and put my face to the rain, swearing I felt the pressure drop as a siren’s thin howl came to us from a nearby town. “You feel it?” Mom asked. The farmland around us hovered in wait; to the left, a gas station sat awash in its light.

Later, when my dad found out that this was what we’d done on her custody day, he let me see the hate. “That woman could have killed you,” he said as he dumped a can of chowder into a pan, got out a couple of bowls. He paced in the kitchen while our dinner was heating, and I wanted to say, hold still, hold still.

Mom also had a scanner, one for police dispatches, and sometimes I was already asleep when she roused me. “Nadia, wake up,” she said one night, voice urgent. “There’s an accident on the highway. Four cars, sounds bad.” We got in the sedan and rubber-necked past a Civic with its shattered windshield. The ambulance lights merry in the darkened sky, grim paramedics unfolding a cot. The night hot and us safe in our car, these images now scrapbooked away. There’s beauty in tragedy if you know where to look; that was a thing I’d learned from my mom.

“Wait until the tragedy’s her own,” Dad said later, when it was his day once more. I nodded over my math homework spread out on the kitchen table because I saw that point, too. He kicked at the fridge door and wanted to say more, I knew, but instead he pulled out the leftover chicken. Later, he washed the dishes while I dried, and before bed we read our three stories, no less and no more.

Back to Mom, the scanner proposing adventure like we were government agents, famous detectives. Weather reports, late nights in the car. “You’re my ride-or-die,” she told me as she drove into the darkness, the town asleep, wet air on our cheeks and lightning all around.

Back to Dad, old episodes of Magnum, P.I., bubble baths while he played Sinatra in the kitchen. “Why’d you get rid of this guy?” he asked as he fished my duck toy out of the trash, pinched his wings and made him squeak. “What’s the rush to grow up so fast?” Big towels, clean sheets. A special lamp that cast stars across my room.

One way and then another, tossed like rain across the years, between their houses, and wherever I was, that’s who I was, too.

As time went on, my dad made rules: When you’re with your mother, no driving at night. No chasing storms, no skipping dinners. Count the drinks she has, and let me know the answer. Call me every day. In response, a single rule from my mom: Don’t let that man make me a monster. I will, I promised my dad. I won’t, I promised my mom, and for a while I believed that these promises could stay sitting side by side, that one wouldn’t have to win and starve the other out.

And then, much later, Mom did get her tragedy, a car accident, her very own scanner report, but by then I was long grown. I hadn’t spoken to her in years. I had my own home, moved on from the two I had known. And around then someone told me at a party that storms can split and that others can sometimes collide, that one funnel cloud can pull everything away from the other. It’s violent and it’s beautiful, and from a distance these tornadoes seem to join. If you’re far enough away, this partygoer told me as he waved his cigarette, it can look almost like a marriage.

Image from this storm video 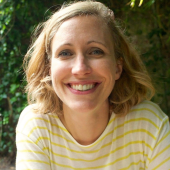 Nicole VanderLinden’s fiction has appeared or is forthcoming in New Ohio Review--where Lauren Groff selected her story as the winner of the 2020 NOR Fiction Prize--Shenandoah, SmokeLong Quarterly, Jellyfish Review, Pithead Chapel, and others. She currently serves as associate editor of Colorado Review and as a reader for Ploughshares and the Masters Review, and her book reviews have appeared in various places, including the Denver Post. She lives in Iowa City, Iowa, and is currently working on a short-story collection and finishing her first novel.