Contemplating the Definitions We Create You Good Thing, written by seasoned poet Dara Wier, is composed of what we might loosely define as sonnets. Interestingly, this collection of forty-two poems – which arguably do not follow many more rules of the sonnet form than their fourteen lines each – begins with the piece “Not A Verbal Equivalent”: “You said one thing as a way of not saying something else. / You wrote something so that other things wouldn’t be written. / You drew me a picture of one thing and not anything else” (1). From the start, Wier’s work seems to beg the question of how do we or, perhaps more aptly, should we even attempt to actually define something or someone, including the you embraced boldly within the title of the collection? Wier successfully contemplates this pregnant question, steering clear of both the heavy-handed and didactic as well as the absurd.

You Good Thing demonstrates an almost anti-juxtaposition of dissimilar matter, if you will, which allows the refreshing variety of content within the pieces to effectively adhere together and create new meaning. Let us observe a section of the opening poem, “Not A Verbal Equivalent”:

Else, we don’t know who, is the detective. We’re on the Wind

To be hidden. To be perfectly accurate you are barefoot and I

Have nothing to hide at the moment. Wild geese. Two butterflies (1)

What are we to make of this investigation of sorts? Let us begin with what are perhaps the most similar subjects in this section: a windbreaker and boots, both of which are apparel. The speaker states, “you have on your windbreaker of many / Pockets and I have on my boots in which I hide whatever needs / To be hidden” (1). The mention of pockets subconsciously prepares the reader for items to be kept, although they are not to be kept in the pockets, but rather they might be hidden within the speaker’s boots. Our perceptions and definitions of something as simple as an item of clothing are subtly deconstructed. Less similar are, for example, boots and geese. How does the piece manage to neatly stitch, rather than cobble, together these vastly varying contents? I wonder if the mention of “wind,” moving air, is enough to set an appropriate stage upon which to later arrive at these creatures, the “geese” and the “butterflies,” which move through the air. While this opening poem, “Not A Verbal Equivalent,” clips through these dissimilar subject matters in this unique yet relevant manner, perhaps a lazy reader will be dismissive, but one willing to perform the heavy lifting, if you will, will be called to discover and be rewarded by new meanings through these untraditional connections.

Not only does the collection approach definition or, perhaps more suitably, redefinition, via comparing dissimilar matter, but by contrasting words which, at first glance, seem to exist very much within the same vein. Let us visit a section of “Needle Threader in Need of Needle”: “Before you opened the door, I shut the window and rolled up / The rugs. I shook sheets open over everything that didn’t move. / Down in the valley the boys are playing their guitars” (3). Typically, we might perceive “opened” and “shut” as well as “up” and “down” as blunt antonyms. The door is “opened”; the window is “shut,” very plausibly by being slid down; the rug is “rolled up”; the sheets are shook “open”; and finally, the boys are “down” in the valley. “Needle Threader in Need of Needle” gently deconstructs these antonyms by showcasing the words side by side in relation to different subjects. For example, while a window is oftentimes shut by sliding it downward toward the ground, a rug is not typically rolled up toward the sky when it is rolled into a coil. Sheets do not allow entry when opened like a door, but instead are unfolded. The “Down” of “Down in the valley” implies toward the ground, yet is a marker of location rather than an adverb like the “up” of “rolled” “up.” While it would be elementary to argue that words can represent several meanings, this thoughtful and diverse medley of antonym pairs reminds us as readers not to oversimplify the definitions of what we perceive. In a way, this technique is almost like that of effective literary repetition, in which the recurrence of a single word is not repetition at all, but employs the word a second time to create an additional meaning. In this case, however, seeming antonyms are not employed simply to contrast – as literal repetition is not simple repetition – but rather are a thoughtful tool.

Let us land on the title of the collection, You Good Thing. These words cascade down both the front and back cover.  The word you is arguably rather specific, implying either you, the individual reader, or the general you. Next our eyes slip down to the rather vague good, an adjective for which I can certainly hear my first creative writing professor say, in most cases, does not perform enough meaningful work. Finally, we land on thing, a noun even less descriptive than its adjective good, for which most of our freshmen English teachers would have slapped our fingers for using. In other words, as we fall down the cover of Dara Wier’s collection, each word tends more toward the superordinate level. Rather than learning more specific information about this you mentioned in the title, the subject of this phrase, if there might be one within the words you good thing, we are further from defining the you than we were before we began. What are we to make of this? Whether or not you judge a book by its cover, I’d argue that Wier’s collection is aptly titled as an attentive reader might be pushed to contemplate the definitions we create. 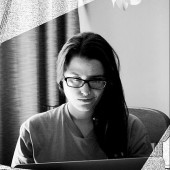 Heather Lang is a poet and critic studying with Fairleigh Dickinson University's low-residency MFA in Creative Writing program. Her poetry has recently been published by or is forthcoming within Jelly Bucket, The Del Sol Review, IthacaLit, Mead and Green Humanities. She has reviewed for Gently Read Literature and HTMLGIANT. Another book review is forthcoming in Prime Number Magazine. Heather serves as Assistant Editor for The Literary Review and co-edits In Quire’s “Picture Postcards” project.