Cooler By the Lake Our newborn was quiet for the whole bus ride; he lay on my breast, sighing half-sleep. Your face glistened, your stubble swam in sweat. My back was drenched.

You said it would be cooler by the lake; it wasn’t. At least there was no tar roof to radiate heat, no fan spinning futility.

Chicago was burning; I swear it was a hundred and twenty. Half the city sought relief at the lakefront, but the air was just as still as in Lincoln Square. There were no waves, a breeze eluded us. Some call 1995 the Summer of Death.

We found a spot by the sea wall, near a small grove of trees. You cast a line for fish which I swore I’d never eat. If anything lived in that dead water, I didn’t want it.

The baby suckled me. His mouth drew life-milk in stagnant heat. I remember how he smelled; I kept some of the pictures and I look at them when you are gone.

The shade didn’t help. His body against mine, more sweat and suffering. His heart beat strong. His diaper stank; I changed him. You threw your line as far as your body could launch it; your hook came back stripped of its worm.

The sun went down. The air didn’t move, the temperature stayed constant. The trash cans were overfull and diapers floated in the water, ours ripened in the camp.

All the lights around us went out. The night became pitch-black and for once we could see stars in the sky; the transformers had blown, blacking out much of Uptown and the lakefront. In moonlight, you pointed out the Big Dipper, the hunter Orion, and the North Star, a beacon leading us to coolness and comfort. I pointed out that when you looked South, the lights were still on in the Gold Coast.

I didn’t sleep that night, but our son did, you did. I watched over us in moonlight and decided his name, Sol. The night dragged, his breath was soft; three vagrants shuffled by. Around midnight, I heard a single fish flop in the water. My breasts still ache and yearn thinking about it.

Photo Source: starts with a bang 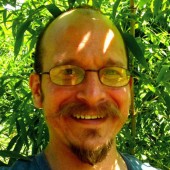 Hobie Anthony has an MFA from Queens University of Charlotte, NC and writes fiction and poetry in Portland, OR, his latest port of call. His work is in or forthcoming in The Los Angeles Review, Crate, R.kv.r.y., M-Brane SF, Prime NumberM, and Prime Mincer, among others. Presently, he is working on poetry and a novel (or two).