And when the farmer saw the giant flower

of the bloom begged him to return.

and caressed it and swiped beetles away

from the blossom’s lip.

He even gave it a name and when the farmer

said the name out loud, the flower began to move—

then completely devoured him.

Villagers searched and searched for the farmer.

When they too stumbled upon the large blossom,

they decided to name it

after a beautiful jaguar

that once killed several children.

But this flower does not want

When the flower heard the name,

it stretched to the closest person

ate the name as well. 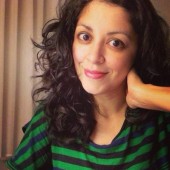 Aimee Nezhukumatathil is the author of Miracle Fruit (2003), winner of the ForeWord Magazine Poetry Book of the Year and the Global Filipino Literary Award; At the Drive-In Volcano (2007), winner of the Balcones Prize; and Lucky Fish (2011). Her work has appeared in Ploughshares, FIELD, and American Poetry Review. Her honors and awards include a Pushcart Prize and a fellowship from the National Endowment for the Arts. She is professor of English at SUNY-Fredonia and lives in berry country in western New York with her husband and sons.