Don’t open the door.  It’s far too late.  She should have phoned instead. Now she’s knocking and knocking. She’s calling your name through the mail slot. Is that sobbing? Could she really be sobbing?

Oh, for heaven’s sake. Get off the divan, turn the television knob. Linger to watch the picture contract. Don’t rush to find your housecoat. Once that door opens, you are hers.

Goodness, she’s a mess. Mascara puddles her cheeks. Even her silk robe sags.

Ask what she requires. You’ve seen her hysterical over the wrong shade of lipstick. Today in rehearsal, she threw a girdle in your face, insulted by its pinch. Maybe it’s all those room service mince pies, you almost said, before prudence took hold. Your mouth is about to lose you this job. Every day, your tongue is loosening.

Her sobs echo through the hall. It’s unbecoming of a woman of her stature. How many guests stand at their doorknobs, readying the turn? Guide her to her room.

“There,” she points to the bed.

It’s an awful sight. Phillipe’s body is a wheel, arms and legs flung out like spokes. He’s shirtless, flabby, hairy, pale. Blood dries like lipstick kisses on his cheeks. His eyelids droop in the leer you’ve come to know so well.

May as well get to work. Who to call first?  Coroner or concierge?

Don’t say yes. Walk out that door. Go now, before she asks again.

“Nellie, please. I can’t bear a day without his face. He’s been my lover since I was eighteen.”

One foot in front of the other. Move along.

But she sinks to her knees. Pleading. You’ve seen this before. Once, you’d finished darning her nylons and opened their dressing room door, catching them mid-fight. She was on the floor, face turned, flinching. You closed the door. Later, you sponged foundation over her bruises, dabbing a comfort you’d no place to offer: There, there. There, there. There, there.

She could almost be proposing to spend her life with you.

You can almost hear Eddie Fontaine singing: I’m beggin’ her for kisses on bended knees.

You will almost do her bidding.

Buy yourself time. Gather powders and salts from the vanity. Empty the cashew dish. Concoct a paste. Move your hands like John Carlo in the Life Mask room at Universal, where starlets reclined, closed their eyes, and posed as if serene. Breathe naturally, John Carlo said, burying them. It’s just a little facial. You stood ready with Miltown and thin-handled combs to scratch their itches, but they didn’t move without his consent. He could have done anything— touched their breasts, taken unflattering photos, left them lying blind for hours. The starlets stretched before him like blank canvasses.

Today, she glows under your brush, John Carlo cautioned when you resigned. Tomorrow, she’ll stab you with it. But what a lark— you and the movie star! Back then, when you lifted the mirror, she’d clap like a child. How easy you thought she’d make it for you: the planes of her face are still perfection.

Now where is she? There, asleep on the floor beside the bed. His loyal pet.

Tiptoe over to Phillipe’s body. How small he seems. The hands that always pawed your skirts are tiny in their stillness. Touch the skin of his arm. Pinch it. Pinch his neck, his stomach, his nipples. Pinch until your hands hurt.

That’s enough. Sweep his hair into a shower cap. Spread his face with Vaseline. Lay dental floss in a grid. The mask will have to come off in sections, if it even hardens. Who knows? You’re improvising. This face is wholly in your hands. You can reveal its truth.

Smooth the paste over his forehead, across his eyelids, over his nose. Work until you reach the mouth. Such an ugly mouth.

His lips are parted. Just reach in. Slide your finger between his teeth.

Find his tongue. Pull. Pull hard, until his tongue dangles down his chin. Just like the dirty dog he is. Or was. A dead and dirty dog.

Linger to watch the picture expand: she’s waking to find the mask on the vanity— his last impression, your everlasting favor. She’s cursing your name through the empty room. There’s sobbing. Of course, she will be sobbing. 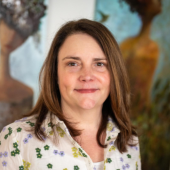 Rebecca Meacham's short story collection, Let’s Do, was published in 2004 as the winner of UNT Press's Katherine Anne Porter Prize in Fiction, and the book was a Barnes & Noble “Discover Great New Writers” program selection. Her fiction has appeared or is forthcoming in Michigan Quarterly Review, Indiana Review, Necessary Fiction, Paper Darts, Sundog Lit, Wigleaf, and other journals. Currently, she is an associate professor of English at University of Wisconsin-Green Bay and a blogger for Ploughshares.