When she was born, her mother took one look at her and knew there was only one name for a child so ruthlessly perfect in her beauty.

The summer was almost spent when the baby decided to come. The Queen Anne’s lace had already gone to seed along the path that led down to the beach, withered heads brown and crisp on their long skinny stems. Margaret Jones had reckoned that the birth would be earlier in the season, and she was well past ready as she stumbled barefoot upon the sandy trail in the dark, her heaving over-ripe belly thrust out before her to lead the way to the water’s edge. She sought the sea, not to send up the flare that the midwife had given her to launch from the island’s shore when her labor began, but for a darker purpose. She had suffered hours of pains without calling for the old woman’s help, as she’d known she would. She’d bitten rags and broken fingernails digging into her palms. She went to the water because the baby’s emergence was imminent, and as she’d planned, she would drown the child posthaste.

Margaret Jones was certain of her course, sure that it was the only way to put behind her the brutality that had brought the child to being. She would toss the miscreation into the bay and turn her back. She would feed the afterbirth to the dogs that kept her company in the yellow cottage nested among the gnarled oaks and sharp seagrasses. She would tell the midwife that the baby had been born breathless, and she would stay on in the wee lonesome house to weather the winter storms. She’d already begun putting away roots from the garden plot and salting fish. She’d spent the last nights of her pregnancy mending nets and making new candles from the drippings of the old. She’d been meant to stay only until the child came, her shame hidden away, but she’d found she had no desire to return to the mainland. And she’d found in her heart even less desire to give away the baby, to turn loose a son or daughter into the wicked world that had only sorrowed her so.

But when with one last harrowing push the girl slipped from her body into her own two hands, Margaret Jones looked upon her deepest blue eyes reflecting the moon, the flawless curl of her ear, the clutch of tiny fingers already so eager to find their way back to the warmth of mother’s flesh. She wept and knew the child’s name. Cruelty. There could be no other. What cruelty it was that Margaret Jones would love this baby so suddenly and so thoroughly, that she would never be allowed to forget.

Cruelty Jones grew straight and strong. Her shoulders were broad and her legs were powerful. She swam with the grace of a beast, scissoring through the brackish waters effortlessly. She ran on the sands, chasing after the dogs, and she climbed the oaks. Mother and daughter stayed on the island, patching the roof time and again as the yellow paint faded from the cottage. Cruelty learned to save seeds and to plant in the spring. She learned to gather mollusks from the rocks when the months were cold. She learned to collect rainwater and gut fish. Margaret Jones taught her the songs she’d learned from her own mother. She taught her the names of the stars and the stories that belonged to them. Margaret Jones did not teach her daughter the meaning of her name.

And yet, there was something of it she seemed to know in her bones. Cruelty would mend nets with patience, stitching gently and handling her work with the utmost care, but when it came to the little fish she captured in those nets, Margaret Jones saw that her daughter had no softness within her. She watched Cruelty scoop the silvery wriggling bundles from the water and then dash the heads of the fish with a rock. She smiled as she did it, joy sending up sparks from her dark blue eyes. She sometimes pitched live fish to the dogs, and she laughed as the two of them fought over the prize, tearing the body to pieces, iridescent scales stuck to their snouts.

Margaret Jones wished to speak to her daughter of kindness, but when she tried her throat was dry, her tongue brittle. She could think only of the copper-bearded fisherman, the stranger who had left her for dead beneath the pier. Only of her sisters who had shamed her when her belly began to swell. Her father, his lips twisting behind his own red beard to say Thank God your mother did not live to see what you’ve become. Margaret Jones picked the pearly scales from the dogs’ noses and said nothing.

The dogs grew old. The first passed in his sleep with a guttural moan. The second lingered on too long, his tail tucked always between his legs, his ribs showing plainly through his taut skin. He stopped eating the scraps offered to him, and then he refused to drink. Margaret Jones awoke to find him soiled in his blanket. She decided his day had come. Before she even lit the fire to put on the kettle, before Cruelty could shake off her slumber, she gathered the animal into her arms and carried him down the path to the beach. She could not bring herself to take the axe to his neck as she knew she should. She remembered the stranger pressing his blade behind her ear and it made her tremble.

She knelt with him at the water’s edge and held his head under. She wept as he struggled meekly. When it was done, she let the waves carry him, and she gathered her damp skirts to return to the cottage. As she turned to tread the sands back to the trail, she saw Cruelty half-hidden in the Queen Anne’s lace, her golden hair unbound and streaming over the shoulders of her nightgown. Margaret Jones thought at first, with relief, that her daughter’s eyes were wet with tears, but as she drew closer she realized, with a stone in her belly, that they shimmered with mirth.

Cruelty became a woman. Her body ripened with fresh curves and she spent more time alone, wandering the woods and shore. Margaret Jones overheard her daughter singing to herself, and all the old nursery rhymes she had taught her now had a strange forlorn tone. Another winter was closing in. Mother and daughter had survived many nested together in the little cottage as storms battered the beach and shook the shingles. Perhaps the time had come to tell Cruelty the truth of the world. She’d told herself she’d never been sure of the need, never been certain that they would live to see another spring. But again and again, they’d plucked tender green fiddleheads and welcomed the balmy breezes. Margaret Jones began to toss on her pallet in the night, awake and fretting for the future. She had spoken to her daughter very little of the mainland, and she’d not told her at all of men. She had not warned her of their dangers, or explained their sweetnesses, which she herself had never known.

It was an evening of bitter cold when Margaret Jones told Cruelty her story, sparing no detail. Mother and daughter sat opposite each other with the worn wooden table between them, mugs of nettle tea steaming in their hands. Cruelty listened intently but asked no questions. Her woolen shawl was drawn over her head and her eyes peered out at Margaret Jones with no feeling that her mother could discern. When she explained the meaning of her daughter’s name for the first time, the slightest smile played upon Cruelty’s thin cold lips. Done with the tale, Margaret Jones leaned back in her chair and said to the woman before her Now you know what there is to know. You may stay or go, the decision is to you. Cruelty sat in silence for a long moment and then replied I will stay with you until the end, Mother. When you cannot walk, I will carry you. Margaret Jones tried to blink back her tears, but they spilled over her cheeks. She took her daughter’s hand in her own, both warmed from their mugs of tea, and she squeezed. She smiled, but there was fear crouched behind her teeth.

Margaret Jones saw that her hair was beginning to silver. She squinted into the blistered looking glass above the wash basin each morning before her daughter woke, and furtively plucked the metallic strands from her scalp. She collected them in her apron pocket and buried them in the garden plot, sprinkled them on the waters of the bay. She took to wearing a kerchief tied about her head when the silver began to overtake it. She felt Cruelty watching her for signs of weakness, and she made a show of her remaining strength, still digging and mending and chopping wood as she always had. But when her daughter would wander alone, Margaret Jones would rest, catching her breath near the stove, warming her bones, which were always now cold.

It was a slip on the rocks while harvesting mollusks that brought her low. Her leg was cut and would not heal. The wound festered and Margaret Jones became fevered. She wasted. She lay in bed, sweating under her blankets as she begged her daughter for more. Her hands shook as she reached for Cruelty’s arm, and tugging at her sleeve she rasped The flare. Send up the flare hidden in the rafters. The midwife’s flare.

Cruelty climbed upon a wooden chair and dug into the dried seagrasses that insulated the cottage roof. She found the flare that her mother had secreted away there so many years ago. Then she gathered Margaret Jones in her soiled blankets, and carried her down the sandy path to the shore. The wind was cold and it bent the brittled weeds. Cruelty’s golden hair was wound about her ears to keep them warm. She took the kerchief from her mother’s straggly silver locks and tied it under her own chin. Margaret Jones wept. Cruelty knelt at the water’s edge and held her mother’s head under. She did not cry as her mother struggled. She smiled. When it was done, she let the waves carry Margaret Jones. She gathered her damp skirts and hunched her back against the wind to light the match. 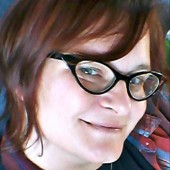 Anna Lea Jancewicz lives in Norfolk, Virginia, where she homeschools her children and haunts the public libraries. She is an Associate Editor at Night Train, and her writing has appeared or is forthcoming at The Citron Review, Hobart, matchbook, Prime Number, WhiskeyPaper, and many other venues. Yes, you CAN say Jancewicz: Yahnt-SEV-ich.