The Dancer – or, Where I Found My Capacity for Hope on an Otherwise Hopeless Night It’s Tuesday, November 8th, 2016, at 6:30PM, and I’m sitting in the crowded all-purpose room—apparently named so because it’s the only room available to the kids at the Alameda County Youth Detention Center that has a functioning kitchen. I’ve been here every Tuesday for the past four years—not in this room, but at this facility—to conduct writing workshops for a small nonprofit called The Beat Within.

I have to admit that I don’t want to be here tonight. My wife is hosting a modest gathering at our Oakland apartment and it feels strange to be separated from her, my friends, my stepdaughter, my mother-in-law, my infant son, on a night like tonight. But I try to be as consistent a presence as I possibly can for the kids, try to be a connection upon which they can rely. And besides, whatever’s gonna be is gonna be, whether or not I’m parked in front of the goddamned television, so, here I am.

But there are no writing workshops tonight. I’ve been crammed into the all-purpose room along with an assembly of inmates, staff, and volunteers because tonight the Detention Center powers that be have interrupted the usual programming—not to watch the results come in, but to host a kind of showcase for the different community-based organizations that work inside this sprawling cement and steel complex that betrays no outward hint of the vibrant young lives it suffocates.

Perhaps it’s no mistake that they planned this event for this moment in time. Of what consequence is an election to a child who cannot so much as glimpse the falling sky?

The event commences as, outside the detention center walls, the Rust Belt begins to fall. But none of us know that. There’s no cell service in here, so, as the kids speak and sing and dance, I’m unaware of any developments until the event’s conclusion, when I exit the all-purpose room and turn down an interminable hallway, where a visibly shell-shocked woman staggers toward me and says he won in a landslide.

It’s not the feeling I am expecting. In fact, this can’t even be described as a feeling. It’s so much bigger.

And as this feeling that’s bigger than a feeling surfs through my circulatory system, contaminating my essential organs, I think about these kids. About the thing they know but are persuaded to bury—that this system is hostile to their very existence. I think about how this thing and others like it have just been unearthed for the whole world to see.

I think about my infant son and the world I’ve brought him into. And then I think about me. And because I cannot select which thoughts surface when confronted with existential dread, I think not only about the impact this will have on his world, but about how I’m going to have to live with the guilt of my own complicity in the state of it.

I drive home, breathing, electricity singing up and down my spine.

At home, I’m greeted with concern. My wife and friends are troubled by the sudden way in which the news crashed down upon me. Maybe it helps them to focus their attention on someone else, someone they love who looks like he might not be okay.

I hug my stepdaughter; I kiss my wife. My son smiles up at me from his spot on the rug.

I remember sitting on a riverbank one afternoon with a friend, when my wife was barely, and still secretly, pregnant, and making some excuse about snakes in the water; I remember him telling me how the birth of his daughter had transformed his relationship to fear. He wasn’t scared of shit like that anymore because he had to be brave for her.

I take one of the cleansing breaths I learned in the childbirth class and I pick up my son. I whisper all sorts of promises in his tiny ear.

Later, lying in bed, I am one of a nation of insomniacs. With our children asleep, there’s no one left to convince of our safety but ourselves. It’s now that my thoughts travel back to the all-purpose room.

She is one of the showcase participants—not one of the brave and brilliant Beat Within writers who read their pieces so well—but a 16-year-old Black transgender girl who gets up in front of the forty-odd incarcerated youth, dozen or so staff members, and handful of us volunteers and performs a dance routine with her two enthusiastic instructors. Just the three of them in the center of that windowless room.

Before their routine, she speaks. She says that if she could, she’d cast her vote tonight for love.

And then she dances. And some of the audience is made up of young boys who make a big show out of laughing at her. But she is completely unfazed. She smiles and grooves and owns her space on that small stage.

As I stare into the darkness, I think about her.

I think about how she’s dealt with a Trump every single day of her life and yet she’s still smiling, still dancing, still believing in love despite being locked up in the least loving environment ever conceived of for a child.

I think that if we can discover her courage and her swagger, our love will transcend whatever walls or cages they conceive of for us.

I think that as long as this fierce young woman keeps dancing in the face of all the obstacles she’s up against, we have no right to wallow in our despair.

I think that it’s time for all of us to consistently put our asses on the line and multiply by infinity the love and justice that she sees in this world.

At this late hour, it’s clear to me that we owe her that much. 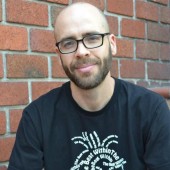 Zach Wyner is a writer and teacher whose debut novel, WhatWe Never Had, was published by Rare Bird Books in the fall of 2016. He works with incarcerated youth in the San Francisco Bay Area and is a contributor to Curly Red Stories, The Good Men Project and Unbroken Journal. Zach received an MFA in Creative Writing from the University of San Francisco and he currently lives in Oakland with his wife, stepdaughter, and infant son. https://zachwyner.com/