Dear Tim Kinsella, of the band “Cap’n Jazz” as well as “Owls” and sometimes other things with names that can’t be pronounced:

You don’t know me. I have the feeling that you never will have that opportunity, and I’m at peace with that. I know you, and to me that is all that matters. Like the way I explained love to my husband: I love you regardless of whether you love me back or not. My love is not contingent on reciprocity.

I was in the car with my husband last month when I timidly brought up a topic that had been buzzing in my head softly for a while.

“You know how they say that when you learn something new, your brain develops a new wrinkle?”

He exhaled his cigarette smoke in a sigh.

“I was just thinking, wouldn’t it be nice if we were born with perfectly smooth brains, because we hadn’t had the chance to learn anything?”

He didn’t reply. He didn’t find me clever, and when that happens, he refuses to dignify the conversation with any further comment. We’ve been together long enough that I interpret his silent thoughts as audible bits of the conversation.

Tim, I know that getting this letter from me is probably off-putting. I’m ashamed to admit that I’m a 32-year-old woman/child writing a letter to a semi-famous icon from her tender years. This isn’t fan mail, please don’t interpret it as such. I’ve only written one fan letter, and coincidentally enough it was to your former bandmate Davey Von Bohlen. I was 19 at the time. Very Emergency was the best thing I had ever heard and the letter was full of stickers and confessions that made me flush-faced and wild-feeling. I am thankful that it takes more than the admission of a crush to make me blush these days. I’ve ravaged hearts and tap danced on other people’s ill-placed trust in me. I’ve broken important promises and hung up on my mother, twice.

I did not mail the fan letter to Davey Von Bohlen.

It was written in my diary and unceremoniously tossed into the dumpster on Woodview Lane in Knoxville, Tennessee. I threw all my diaries away that afternoon. I’ve always felt like my thoughts could become tangible items and then be physically excised. It turns out that throwing away all your diaries just gets rid of the paper copy. Sometimes the worst thoughts are engraved.

I began taking care of my grandfather, whose name was Winston, the winter after I got married. The entire family protested, because I lived so far away—an hour—and because I was still a “newlywed” and (nobody told me this, but) as a newlywed, you are expected to cut off all contact with the outside world, shirk most of your responsibilities and have sex all the time. This made me feel even more like a martyr. Tim, I’ve learned to put names to my faults, and I have to tell you that I delight in playing the role of the selfless sacrificial lamb. I would drive to Knoxville once a week to look after him because he was old and fragile and had Alzheimer’s disease. Every grandparent I had died from it, and it’s only a matter of time before I die from it too.

Before I became a caretaker, people who had been through it already tried to prepare me for the degeneration of my grandfather’s brain. Here’s what I learned about dementia: It’s like you travel backwards in time. You start out normally, then you get scatterbrained, then you can only recall the names of those people close to you. Then you’re a teenager, groping the nurse and accidentally your own granddaughter—whose name is in the tip of your tongue, what is it?—and then you are a child, because your motor skills are failing and people give you simple tasks to do. Sort the coins. Fold the washcloths. Button your shirt. And then you are an infant; you are crying and you don’t know why, you are hungry but you can’t remember the word for hungry, nobody knows how to placate you. The world is a frightening place. Then you are in utero because you can’t remember how to swallow or how to drink through a straw.

And then you don’t exist anymore.

Tim, I don’t know if you’ve ever known someone who lost their mind. There is no dignity in it, I can tell you that much. When I took my grandfather to the bathroom, I had to remind him of every step. And later, when he couldn’t put the steps together, I did it myself. There are parts of your grandfather that you aren’t meant to see, Tim. If my grandfather—a World War II veteran, a killer of the Japanese—had the wherewithal to understand that his own granddaughter had done any of these things, he would demand to be immediately euthanized.

Pride is a luxury.

Large groups of people would frustrate him and sometimes frighten him. His wife, my grandmother, seemed to think that the best way for him to remember the people in his life would be to surround him with as many of them as would fit into their tiny farmhouse, turn the heat on as high as they could stand it, and boil the situation like a soup. The cacophony was punctuated with her shouting at him from time to time “DO. YOU. KNOW. WHO. THIS. IS.” The question was humiliating for all involved, really. I was the person on the other end of that question more times than I was comfortable with.

Will he know me? Am I important enough to be the wrinkle in his brain that isn’t quite ironed out yet? Am I precious to him? Flatly: no.

He would look at me and his eyes would soften. He knows my face, I would tell myself. He isn’t afraid of me, and that is all I can ask for. He was sometimes afraid of the nurse who arrived to do physical therapy with him. He downright loathed the woman who came from the VA department. But he knew my face and I did not frighten him. There was only one day when I looked into his eyes and nothing looked back at me.

“Winston,” I whispered. His eyes moved to meet mine, but they did not soften. “Do you know what I saw on the drive here today? I saw two does and a fawn. It was the most beautiful speckled fawn, Winston. They were running through the forest and they came out at the edge of the interstate, and just stared at me.”

He smiled. I had never been so happy to see his jack-o-lantern grin.

I would drive the hour back to my house in silence, trembling, having looked directly down the barrel of my inevitable future. Tim, I know it’s heartless to turn that situation around like that. I know it wasn’t about me and it’s disgusting to be so self absorbed, but that’s the point of this letter.

Sometimes he would attempt to tell me things through the dull roar that my grandmother had created in an effort to enrich his life. It would begin as a repetitive mutter, and I would find the cadence of it and try to suss out the words. Is he singing? Is it a poem? Don’t. Forget. The. Mule. Is. Tied. Out. Back. Don’t. Forget. The. Mule….

“What mule? Winston, tell me about the mule.”

He would eventually make eye contact with me, and sometimes then things would click easier. I could make out more words. I wrote them down, and then feverishly searched online for the sequence when I got home. I was hoping to find any snippet that could give me a window into his brain. Was it a song he was remembering? Words his father had spoken to him? His mind was a labyrinth without an entrance or an exit, a poorly constructed puzzle with no answer.

Most of the time, he was muttering about worries that he had forgotten.

Other times he had mistaken me for a girl he had dated. It was really a grab bag in there. It was like you had unfolded hundreds of origami cranes and then tried to refold them into flowers. The creases were still there, the paper knew the correct direction to go, but the hand of man was redirecting it. Now it didn’t look like a crane or a flower, it looked like paper that you had ruined.

Tim, I know that my brain is already unhealthy. This is why I’m scared.

“Hey, will you get me a bottle of water in the gas station?” I’ll ask my husband.

He will go to pump the gas, then open the door to grab his jacket.

“When you go in, would you mind getting me a water?”

I have no idea I’m doing it.

What. The. Fuck. Tim. Kinsella.

I do not know who will be taking care of me because I do not have children. I can’t imagine that the nurses at the state-run nursing home will go home and doggedly research the words that I’ve managed to force out.

My words, Tim Kinsella, will be your words. It’s truly unfortunate that your words are usually nonsense. They might have imparted some kind of wisdom on my caretaker.

Inside my mind, I would have been singing along to the song that I’ve had on repeat for the past 2 hours. I’m 19 again, and I’ve assigned some kind of private meaning to “Oh Messy Life” and I’ve just been dumped by my emo-band boyfriend. My DiscMan has come with me to the claw-footed bathtub. I am soaking out the heartache and trying to kill it with decibels. You are singing directly to me, Tim, and somehow I feel worse which leads to feeling better. You can twist the knife better than I can.

It seems only fitting that you’re going to be the soundtrack to my dementia. 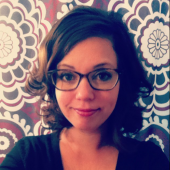 Sarabeth Minton lives in Morristown, Tennessee where she works as a waitress. In her spare time, she writes and goes on long car trips with her husband. She eats more cereal than a grown person should.