For seven months, I carried a black gun across my back. I have camouflage uniforms packed away in boxes, the sun-faded backs of each tan blouse worn through from the rubbing of a loaded magazine swinging—day after day after day—against my spine.

In the desert, I started out using a rigid two-point sling that the Marine Corps issued to me. After only a few weeks, I switched to a one-point elastic-reinforced sling because it made it easier to move the rifle from my back to my shoulder, because it gave me the freedom to achieve proper cheek weld, because it made it quicker to send rounds screaming downrange.

This week, my son’s school sent home a letter saying that they are locking the doors during class hours. Because of the shootings. One of the teachers had to sit down and draft a letter, type it out, and give to each parent a copy that explained the precautions the school will be taking in light of recent events. My son’s school is a church. There are only thirteen children in his class, and it’s a church because it’s a preschool. My son isn’t yet four years old.

My brain has folded upon itself. It knows how to kill, it knows how to make my body perform the movements necessary to chamber a round. It knows the movements necessary to find a stable position, to minimize barrel sway. Squeeze the trigger, don’t pull. In a decade with the Marine Corps, I earned an expert shooting badge on every single qualifying range that I fired on. My eye is sure and my hand is steady.

My mind isn’t always as steady. My wife navigates my mood swings, entertains my manic bouts of obsession. When I can no longer bottle up my aggression and my destructive side shows, she advises. When I want to move the chicken coop—not later but right now—from one side of the house to the other, she endures. I’m often quick with the trigger; she’s great at managing the recoil.

I have pulled a trigger on countless birds and squirrels and there was a time—in a poppy field surrounded by little boys and small girls—when I wondered if I would ever have to pull a trigger on a child.

My oldest child is nearly four years old and so every night for nearly four years I’ve crawled into bed with him, stroked his hair and sung him songs by Prince and Soul Asylum. I’ve run through Hootie & the Blowfish and The Cranberries and Blind Melon until he could sing along with me. My son isn’t yet four years old, but recently a toddler friend of his had a birthday dance party complete with a deejay and my son requested Purple Rain. He swayed in circles by himself beneath the lights while holding an inflatable blue guitar. While I wiped tears from my eyes.

And still: it’s nothing for me to line up iron sights and hit dead center from five hundred yards out.

Give me an AR15 and I can disassemble it in less than half a minute. Upper receiver, lower receiver, both hand guards if the gun doesn’t have a quad rail installed. I can hand you the buffer spring and I can break the bolt carrier group into four separate pieces. I can drop the firing pin into your palm.

At one year old, my youngest son’s entire hand can still fit inside my palm. He’s my bruiser, he’s all brute force and impatience. Disassembly will be easy for him; it’s the rebuilding that I feel the need to educate him on. When he’s upset, his entire body goes rigid and the veins on his neck stand up. Just recently he’s learned what a question sounds like—he doesn’t necessarily understand the question, but he knows that he should respond. When he’s happy, he coos a soft yeah and it’s the sweetest sound I’ve heard. 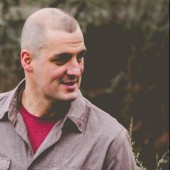 Christopher Baumer is a veteran of wars and white waters. After spending a decade in the United States Marine Corps, he now lives in southern Oregon with his wife and his two boys. He holds an MFA from Oregon State University and his previous work can be found in Unbroken Journal, As You Were: The Military Review, and O-Dark-Thirty. By day, Christopher is a fixer of broken machines. By night, he's a riverside wanderer that dreams in shades of evergreen.