Frost glittered on the branches. Later there would be a thaw, but right now it was ice crystals like fur on the windows and matted grass and telephone lines and poles. Ice zinged on the air, stung the skin like a lasso.

The snow man lumbered out of the yard, but he was slow and balloony, so we could run away: we were not afraid of him. We were young at the time. The ice knives, well, they were dangerous, and they were aimed at us. We are few. They are the ice foe.

We set water to boiling. If they climbed over the stockade or pelted us with diseased carcasses, we’d be ready. But the diseased carcasses clinked, shattered, and melted. They vanished before our eyes. We did not know what to think.

We sipped from the goblet. One of us was the first to be transformed into the wind and ice, and we poured water on that one, then stopped and shaped the ice into a sculpture of a flame. But there was no heat, of course. One of  us became an ice matchstick, and another of us an ice candle. These melted too. We are fewer now. We sit with our hands folded; we wait for the next thing. 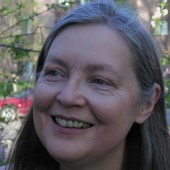