Returning to a place after a long absence, we are often shocked by both the small and the vast changes, effectively alerting us to the radical indifference places have to the sentiment we apply to them. Here, our own selves can become the site of an internal quarrel as to how a place once was; by claiming to cognitively remember the feel of a place, our bodies can provide a different history of the past. The result is that a place can take on a life of its own, quite apart from the way it is experienced or remembered.

Dylan Trigg, from The Memory of Place

Note: “dub for cascadia” takes its title from the song by Loscil on Endless Falls (Kranky 2010) and appeared in Coconut Issue 16. 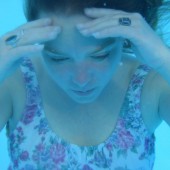 Deborah Poe is the author of the poetry collections the last will be stone, too (Stockport Flats), Elements (Stockport Flats), and Our Parenthetical Ontology(CustomWords), as well as a novella in verse, Hélène(Furniture Press). She has published several chapbooks, most recently Keep (above/ground press), and also co-edited Between Worlds: An Anthology of Contemporary Fiction and Criticism (Peter Lang). Deborah is assistant professor of English at Pace University, Pleasantville, where she teaches creative writing and literature and curates the annual Handmade/Homemade Exhibit and the Vox Creative Arts Series. For more information, please visit her website.