I’m only 18 years old and being only 18 years old means you’re stupid. Or at least that’s what my uncle Paul said on Christmas Eve when he was drunk and I accidentally spilled some wine on his Irish wool sweater. All I want to know is why. Why what? Well I dunno, why anything, I guess.

Here’s a story: I came back from college and my mom said keep your music turned down when you’re driving down the street, okay? Mr. Caratore is dying.

So when I’d leave I’d pause my music for 10 seconds as I’d drive down our street and past the Caratore’s house, the last one on the left. And for 10 seconds I’d try and picture what it probably looked like in there, with the Hospice workers and little Kevin staying quiet in his room and not-so-little-anymore Luke skipping his medication and seeing colors again. The two yappy dogs would bark and Mrs. Caratore would put them outside without saying a word. No more friendly Mr. Caratore. No more Caratore family. I dunno why.

10 seconds. Then the radio was back on and I was downtown and I didn’t have to think about dying anymore. At least that’s what I thought, but after going back and forth in front of a house smoked with death too many times, it sort of leaks into you. There was that damned black spot growing between my fingers.

Quiet on Speakers Lane, quiet for Mr. Caratore. One Tuesday night a few days before Christmas I called Tristan to tell him about the black spot. There was a chance Tristan had one too, after being in love with him for two months, I’d figured out that he hated himself more than I first thought. But only at night. Tristan was always the sweetest bear of a boy in the daytime.

But I called him and he said I’m so sorry baby, that’s absolutely terrible. I can’t imagine how the family must feel.

And I said Tristan, am I a coward if I worry about their sadness seeping into me? Is that too too too selfish?

And he said Baby go to bed, I love you more than anyone I’ve ever loved, you’re my angel, I’ll keep you safe.

Nice words don’t hold you quiet at night and so I made some toast and ate it in bed and fell into the softest sleep I’d ever had.

(The way the sun shone over that field, boy. The tips of the long grass were on peaceful fire. The owls were caged just up the street—my dad held my hand and called me sweetheart. One tree stood alone in the field and I thought it’d be perfect to sit under after a long day’s journey. Open up a leather bound book and read poems aloud to the tiny yellow flowers. A heron flew by overhead and my dad pointed at it silently. It disappeared into the swamp bordering the field and I traced the path it had just travelled through the sky with my eyes. That was where the heron was. Now it’s where the heron isn’t.)

Morning leaks into my room and wakes me up with a steady kiss on the eyelids. I stretch and feel the day move into me. Good morning, good morning. I come downstairs and pour skim milk into a bowl of Cheerios and my mom tells me that Mr. Caratore only has a few days left. I don’t know what to say, really, so I make a sad-ish face and tell her I’m gonna go to Nashua with Tristan to visit our friend Wayne who lives outside of town.

“Oh, that’s fun honey. Don’t be back too too late though, your dad needs sleep.”

And I drive on up to Tristan’s and the highway flies and I’m there in his cozy little house and his comfortable big arms and I let myself melt for a little as he holds me but I make sure he doesn’t know why.

“I’ll always love you,” he says and smiles his painfully nice smile.

“I’ll always love you too,” I say and I mean that when I say it, I do, but this was a strange day and I felt too sad to really hope for anything.

“Then let’s hit the road cutiepie,” Tristan says and he picks me up and we get in his car and set the GPS for Nashua. We listen to soft music and I hold onto his right hand for the two hours it takes to get there, and I fall asleep for a little. I dream that:

(I am older and the lake is surrounded by an army of trees rising up and up and up. I walk backwards into time and soon it is only woodsmoke and moldering leaves. The doll I carry wears a flowery dress and the houses are lined up along the river bank. Don’t fall in, my father says, the frogs are busy practicing. I see them dancing and somersaulting among the rocks. See? my father says, You would’ve interrupted them. Fires rise up from the chimneys of every house and I climb up to the third story of the mill. The floor is missing in violent holes and dead bugs line up along the windowsills. I left my father down below in the forest and he yells up at me, the frogs are leaving! I look down and see a great blur.)

I wake up 15 minutes before we arrive and Tristan squeezes my hand. “Good morning love,” he says and I stretch.

“We’ve reached our destination, prepare to disembark.” He pinches my cheek and gets out of the car.

My head’s all fuzzy from dreaming and my mouth tastes like sand. But we’re in front of Wayne’s house now, tough-as-nails, whiskey-for-breakfast Wayne. He’s standing next to his mailbox smoking a cigarette and the sun’s going down behind him. He’s like the cowboys that ride off into the sunset, boots and all.

“Hey guys,” he says in his quiet voice. We all hug and gather around Tristan’s car, talking and catching up and just being together. Leather jackets and quiet drawls and then, like falling asleep–it’s dark.

As we stand talking two spots of yellow light appear. They float closer, and a few seconds later we can see the cigarettes attached to the lights and the mouths attached to the cigarettes and the faces wearing the mouths. Ryan and Mike, 18 years old: that stupid age. They have sad eyes and old sweatpants and the fast-slow voices and snuffly noses of kids who’ve just started doing coke. They mostly talk to Wayne but then Ryan turns to me and says “The weirdest thing happened to me last week,” and his eyes are too bright. I ask him what it was. And his hands start jumping and making shapes in the air and as he talks I feel my eyes getting bigger and bigger, like one of those old cartoons. Cos this is his story:

“My friend Cole calls me up, and you gotta know, Cole’s literally always threatening to kill himself. Does it all the time. He’s a real psycho.”

Mike chimes in with his agreement. “Yeah man, real psycho.”

Ryan shakes his head, laughs his high-pitched laugh, and keeps going. “So he calls me Tuesday night and he says ‘Ryan man, I’m gonna do it, I don’t need any of this shit anymore I’m gonna do it’. And I’m all, ‘Calm down, I’ll be there in five minutes,’ so I walk over and run up to Cole’s room and he’s standing there with this shotgun, just standing there. And I tell him to put the gun down but he starts pointing the thing at me, and he’s like ‘I’ll do it man, I’ll do it!’and so I’m like ‘Dude, no, please come on’ and all that and before I even know what’s going on he takes the gun and sticks it into his mouth and bam. Right through the head.”

Ryan’s smiling and half laughing and my hands start shaking. And he laughs and keeps going:   “I’m freaking out. There’s my friend Cole, known him since the 8th grade, bloody on the floor. So I run downstairs sort of in a panic and his parents are like ‘Are you guys okay?’ and I’m just like ‘Cole’s dead’ and they don’t move and I just leave and they have a goddamn open casket at the funeral but they made him up all nice and—”

And he keeps going–laughing and smiling with his bright eyes and the blood he saw and the eighteen years he’s had and my stomach feels tangled and it stays that way the whole ride home. And of course before I get to my house I have to pass the Caratore’s, and even though it’s nearly 2 am the lights in their kitchen are on. So I have to think about Mr. Caratore dying in there and Ryan laughing and dying back in Nashua and Cole dead underground somewhere near here.

My mom’s up when I come home and I tell her Ryan’s story and she’s disgusted and then worried. She says I need to be smarter and I tell her I’m nearly 19 so I’ll be sure to be less stupid this year. I sleep and:

(I’m running down the mountain–it’s not a mountain, it’s a hiccup, my dad laughs back at me but it feels steep as McKinley to me and I want to ask my father what it was like to stand on top of North America and just scream but I don’t because if I stop running I’ll fall down into nothing. I push myself up against trees and they push me back and I’m running again, sunlight staining everything gold and tough boulders pushing their way up out of the forest around us. If I reach the bottom of the mountain someone will leave. My father tells me to slow down but I’m not the one moving my feet anymore. He says I never was.)

I wake up a few hours later–it’s five a.m. and all of the Caratore’s lights are on because the sun hasn’t risen yet but also because Mr. Caratore is dead. 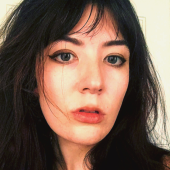 Alyssandra Tobin is a third-year English major at the University of Vermont. She's currently interning at Eastern Point Publishing House and Extract(s) literary magazine, and has been published in The Green Briar Review and the Albion Review. Wolf blankets, Tarantino films, and mountain sunsets are very important to her.