Her father had said last Sunday that he wouldn’t get drunk on Sundays, but it was Sunday, and he was drunk. He was lying drunk on the low rock wall at the back of the garden, where his beehives and her mother’s quince trees were. He had left the garden gate open, so the chickens were eating turnip greens and snap peas, and the sheep were eating everything else—even roses. She had a long stick, which she used to whip the animals out.

“I did not break my promise because I am not drunk,” her father said.

Her mother could no longer make quince paste because she was dead and in the cemetery. Her father no longer cared for his bees or jarred his honey. He had lost none of his queens or his hives, though, and he said that they all stayed to sting him.

“I am not drunk,” he said, “and I know what day it is and where you want me to go. But I won’t go, and I never want to see that woman again. When I die, I don’t want to be next to her.” A bee landed on his neck, and he slapped it as it stung him.

He fell off the wall and onto the dirt.

She knelt by some roses the sheep had missed, took a folding knife out of a pocket, and cut orange and yellow roses. There were ferns, too, and she cut ferns. With the bouquet, she left the garden, careful to shut the gate behind her.

She rode her bike to the cemetery and found her mother’s grave. From a metal vase that was bolted in front of the headstone, she removed the flowers she had brought last Sunday. She replaced them with the new ones and left without saying anything.

Walking her bike, she headed toward a Dumpster, where she always threw out her mother’s old flowers. Everyone threw all their old flowers in that Dumpster, and when someone important died, a week later, it would be full of so many wreaths and arrangements. She’d see carnations, gladioli, lilies, and roses. The scent would be thick. She leaned her bike against the Dumpster, and just as she threw her flowers in it, she saw a shirtless man was lying at the bottom of it.

“You’re so polite to the dead, but you have no consideration for the living,” he said, brushing the old flowers off his face.

His face was strange. His nose was darker than his face skin, and his ears were lighter. Black strings dangled out of the corners of his mouth, and for some reason, those strings were tangled in his fingers. His eyes were too shiny and wide.

“I see you’re now staring at my face,” he said, “so you’re even ruder than I’d thought. Would you like to see how my face works? I could show you.”

She put her hand in her knife pocket and grasped her knife.

She said he must have had friends because he was a nice enough man. She let go of her knife.

Her father ran up to her. He was out of breath because he had run from their home. He had a bee in his hair. A queen. “I’m here!” he said, not yet looking in the Dumpster.

The man in the Dumpster said the soldiers had cut out his eyes, so he took out his eyes, which were glass. His sockets were pinker than any carnation.

“The last thing they did,” he said, “was that they cut out my tongue.” He unhooked his tongue from his head, and she saw that it had many strings attached to it and that all along—with his hands—he had been manipulating it as he would a marionette.

Her father looked in the Dumpster to see what his daughter had been talking to. It was the first time he had seen a breathing effigy. 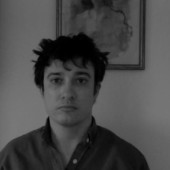 Rhoads Stevens was born in Baltimore, grew up in Honolulu, and lives in Providence.