When I was little, I used to believe that you could sit on clouds. When I turned four, my parents took me on my first plane ride, and once we were in the air I begged to open the window. My Mom handed me a set of fat Crayola markers and a writing book—the kind with the dotted lines and ABC’s—and told me I couldn’t open the window. If I did, she explained, I would get sucked out of the plane, along with everyone else, and there would be no oxygen.

I stared through the thick glass window at the clouds, feeling horrified and small. I pictured my Mom, Dad, and I whirling around in the sky, circling the clouds up and up and into outer space.

“But in Heaven we sit on clouds, right?” I asked.

“Yes. In Heaven you can sit on clouds,” my Mom answered.

I imagined all of the people who were gone, like my Mimi: floating around our plane in white robes and holding brass harps, humming hallelujahs and playing leap frog on the clouds.

Dad calls me to tell me about Mom. It’s my second year of graduate school in Memphis and it’s a humid August day. I am driving to buy myself flowers when I answer the phone.

Dad wastes no time getting to the point. “Mom is sick. She’s in the early stages of dementia.”

I don’t know what to say.

He tells me about it like it’s one of his business calls. I don’t blame him—it’s how he is handling it. After he hangs up, I pull over into the TJ Maxx parking lot and cry. The sky glares brightly with emptiness. I keep remembering being young and sitting in Mom’s lap and touching her cheek. I used to always ask her how her cheeks were so much softer than mine. I sob until I notice a security guard watching me, so I drive home, open a beer, and sit on the kitchen floor.

Classes demand most of my time, until December, and I’m alone in the house I share with my boyfriend. Unless you count the dog—which I do, but he mostly sleeps and yawns and only gets up to look me in the eye, his stare saying “I need to pee” or “It’s time for food.” Drummond, my boyfriend, is at work, and he won’t be home for hours.

“I’m fine, I’m doing word puzzles to strengthen my mind,” she tells me on the phone. I picture her on her couch, hunched over with a pen, running her fingers through her gray hair.

I leave the couch to walk around our little house—to stretch my legs, to stare out of the window for an unknown amount of time, to pour another glass of red wine, to move my body from one place of rest to another. I never know what day it is, what time it is, or what’s happening in the world. I only know the crevices of this red couch, the cover of the book I’m reading, the smooth stem of the wine glass. Drum will come home from work and I won’t be alone anymore, except in my head. I wonder if my Mom feels alone in her head, even when Dad is home.

I talk to my mom the next day. “Oh, I’m doing good,” she says in her usual energetic tone. “Are you watching American Idol?”

I have to fight back the frustration I feel when she asks me this, because she asks me this every week. I want to remind her of that, but instead I reply: “No, I’m not. I don’t have cable. How is it?”

“It’s pretty good, that Simon is just too funny,” she says.

“You will, you will!” She says back, and I hear her enthusiasm.

When I hang up, I pour a glass of wine and look at the calendar on our refrigerator: an empty December. One day this week, I think.

Two years after my first plane ride, I went for my second plane trip, and I sat by the window again. I don’t remember where we were going, but I know that I had my Crayola markers again and the red one was my favorite. I stared out at the sky and remembered what Mom had told me last time. The sky yanks you out and doesn’t let you breathe. I checked to be sure the window was sealed tightly. I held Mom’s hand.

If there was a crack in the window, or if another kid who didn’t know any better opened one, I assumed that my body would fly upwards, into space, and then out of our galaxy. I thought about how there must be so many bodies floating in space—people who were sucked out of planes or spaceships—their skeleton heads still inside of their spacesuit helmets, knocking into planets and stars.

Alone in the house again. It feels so much bigger than a duplex when I’m here all day. I spread out on the floor, trying to do yoga, but I’m not even sure what yoga is. I’ve never tried this before. I sit back and curl over into child’s pose, staring at my knees. I breathe in and out. I try to calm myself, but I can only think about Mom.

I imagine her, only thirty minutes away, in that big house, alone while my Dad works at the bank and my sister is in school or out with her friends. My Dad calls her every day, but he is often gone on business trips. My sister is getting ready to graduate and leave for college. She will be hundreds of miles away. Does my Mom think about this? Does she cry on the hardwood floor, too? When I start to feel selfish and sick, I get up, telling myself that I should be happy, because I am fine, because I am not the one who is sick, because I am the one too weak to get into my car and go see her.

I tell my Mom on the phone: “If you get lonely, just call me and I will come over there.”

“Okay,” she says. “I just never know what time it is. I wake up, then I go back to sleep, and then when I wake up again, your dad is home and it’s time to eat.”

My Dad takes me out for lunch, at a deli near his bank.

“So have you talked to Mom today?” He asks.

“No, I usually call her at night.”

“Oh.” He picks at his sandwich and sips his sweet tea. “It’s just that, you know, she’s alone most of the day.”

“I know, Dad, but I have to read. . .” I stumble over my words. The image of the empty calendar hangs heavy over me.

He looks up, his green eyes sunken in beneath tired skin. “I know. You’re busy with school. You know, it’s still so early. We have high hopes for finding a medicine that will work.”

“Are you scared?” I don’t look at him when I ask. Dad never talks about his emotions.

“No. We don’t have any reason to be scared.” He sounds confident, but I can’t tell if he’s being honest.

I look at him to read his expression, but he’s looking away.

Mom says, “I feel so out of it,” and I think of the lost astronauts in space, their bodies disintegrating in their space suits, their space suits floating onward. Bodies bumping around in darkness.

She says, “I get lost all of the time now. I stop at green lights. Your dad says it’s just a lack of confidence, though. Everything is fine.”

She drives to Birmingham to see her mother at the end of December, by herself. It’s four hours away. She is scared, but this is something she has to prove. She goes the wrong way on the interstate for two hours before realizing.

“Call me if you get lonely,” I said before she left.

I wait around for her call all day, and after eight hours I call her.

“Oh, I made it just fine!” She doesn’t mention the wrong direction on the interstate; I find that out from Dad. “I’m here with Grandmom watching American Idol. Are you watching it?”

I close my eyes and shrink down into the couch.

But I want to ask: What is it like to have questions stuck in your head?

Do they swirl around, bumping into others, confusing you even more?

I want to say: It’s OK. I’ll be there. I’ll keep you safe from the clouds.

Instead, I listen quietly as she talks to me, and then I tell her about my day, promising before I hang up to come over when she returns. 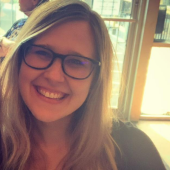 Amanda Muir is an MFA candidate in Creative Nonfiction at the University of Memphis, where she currently teaches literature classes part-time. She is a former Creative Nonfiction editor for The Pinch. Her essays focus on women, relationships, and growing up.