An Unflinching Take on a Stylized Tale From the opening pages of Brian Birnbaum’s turbulent debut novel, Emerald City (Animal Riot Press, 2019), it is clear the author is intimately familiar, either through research or lived experience, with the world he creates – exploring drug abuse, organized crime, bribes, corporate fraud, and sexual abuse with unflinching realism. While this may sound like your standard crime novel, it is not. We already know all the terrible things that have been done and by who. Emerald City is instead about the aftermath — the characters trying to untangle from the web that they or others have created.

The novel centers around three college-aged kids: Benison Behrenreich is the hearing son of two Deaf parents. At the start of the novel, Benison’s father, CEO of a Deaf access agency and man of influence in the Deaf community, is offering a bribe to the athletics director of Myriadal College. Benison knows this, but takes the opportunity, making him seem like just another over-privileged kid who is aimlessly wandering through life. Meanwhile, Julia and Peter are dealing with their own family dramas. When her Julia’s father relapses back into drugs, her once-structured family life starts to crumble and her mother quickly sends her to live with Johnny Raciti, her estranged grandfather, crime boss, and drug dealer. It’s Peter who faces the worst circumstances of the group — abused by his mother and abandoned by his father — he copes with his tumultuous upbringing through drugs and alcohol and is preyed upon by drug dealers.

But what is fascinating about Emerald City isn’t the salacious details and criminal behavior, but the richly developed characters, who you can’t help but like even when they’re unlikable. At times you’ll want to look away, but just as Birnbaum doesn’t let his characters, nor his readers, off the hook. The language can be crass, the characters frustrating, and the shifting timelines a challenge, all in a world full of violence, addiction, and failure. Every character is making decisions in order to survive: outrunning the past, avoiding or feeding that addiction, providing for or failing their family, and the children are left to pick up the pieces of their parents’ shattered dreams and bad decisions.

Benison’s father tells him that he left home at sixteen after pushing his father down the stairs. “He didn’t say anything I hadn’t heard. But something snapped. Maybe he said them one too many times, but I clocked him in the gut and he tumbled down the stairs…” Julia’s parents cut ties with their family involved in organized crime only to have the past catch up to them and filter down to their daughter.

Each section is from a different character’s point of view, and there’s a lot to absorb. In the novel, time loops in on itself — the present turns into the past and then back into the present, sometimes in the same section. It can be jarring at first, but I came to appreciate how this novel is structured, especially as the reader watches the choices characters made in the past catch up to them.

What propels this work is Birnbaum’s prose style underlining the chaotic and violent world he portrays. The mix of details and dialogue help solidly ground the reader. Julia’s father calls her after he relapses: “‘Look, I’m sorry,’ he said somewhat softer, like a pillow pulled through with feather stems.”

The novel also provides a unique view into Deaf culture and growing up as a Child of Deaf Adults (CODA). Benison communicates with his mother and father through a mix of sign language and talking. There are references to deafness and hearing aids, and the inner workings of Behrenreich Interpreting Services show how Deaf people communicate with the hearing world. Ultimately, the interactions between all the characters, hearing or deaf, represent our inability to communicate with and understand each other. Benison finds out about his father’s arrest on the news: Since adolescence, he’s been a stranger in his own home, the last to know — or never knowing — until it happened to him.

It is hard not to read this book and think about how we enact a cycle of abuse on each other, whether through what we see on the news or in our lives; how we teach our children to strive for success at all costs — which often means amassing as much money, fame, and material belongings as possible. Everything is up for sacrifice in pursuit of this goal – the safety of family, respect for others, and ultimately respect for one’s self. Emerald City seems, above all, a warning against this cycle. Some of these characters come to terms with their lot in life and end up in marginally better places, and others slide deeper into addiction and despair. It’s unclear which are better off. 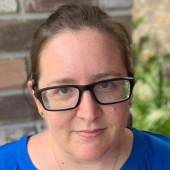 Emily Webber was born and raised in South Florida where she lives with her husband and son. Her writing has appeared in The Writer, the Ploughshares Blog, Five Points, Maudlin House, Brevity, Saw Palm, and Split Lip Magazine. She’s the author of a chapbook of flash fiction, "Macerated," from Paper Nautilus Press. To read more visit her website.