Session 17: Brent in his own words describing the brouhaha
The whole thing went down in the second to last game. Nationals versus Braves. Our Nationals fell behind 8-1 on an innings-long clusterfuck of walks, botched grounders, and shots into the gap and down the line off Richard, whose curveball just wasn’t breaking today. Little by little, though, we chipped away at the lead. Our assets were speed, a tiring Braves pitcher, relievers with no control, and the pudgy lefty at first base with no range who could hardly bend over and field something hit right to him. Michael hadn’t been in the game, but when the score was 9-7 momentum seemed to be building for him to come in and get the big hit – that is, until the Braves parents started riding the umpire. Our rally was jeopardizing their playoff spot, and every borderline call that went against them was met with a comment that he was blind, not ready for this level, obviously new to the game, ridiculous, drunk, high, on the take. In the fifth they went apeshit after Timmy was called safe on a stolen base attempt despite getting thrown out (even we had to admit) by three feet. While we cheered and Timmy got up and waved at his mom, Braves dads said things like “Ah Jeeesus blue!” “Come on! Come – ooonnnnnnn!”

Here’s the thing: I’d been sitting here too long, in the hot sun, basted with sweat, feeling sharp splintery wood on my ass, cheering for other kids, waiting for Michael to get into the game, watching him sit on the bench after I’d told him with authority that he should be a starter, and now I had to listen to these assholes.

So I stood up. “Hey, simmer down,” I said, shrugging my wife’s hand from my forearm. “Get mad at your kids if you’re so pissed off you might lose.”

This comment triggered a medley of interfather combustion: men stood, gestured demonstratively, descended wooden planks, pointed fingers at each other like jackhammers, the umpire and coaches and moms sent forth emotion-driven pleas for everyone to just take a step back, and the next thing you know, friction takes on a physical quality, personal space gets invaded, lines are crossed, an attempt to headlock me triggers a retaliatory elbow to the rib cage, combat mode is invoked, men represent their territory, I feel a big nose and mustache against the side of my face, hear lots of grunting and a young boy crying, coaches leave the field to help restore order, the game is called, people clump into family units, jawing occurs in the parking lot, we drive off watching out for police cars, only a few of us get pizza afterward.

At the downscaled pizza party we kept the talk focused on the rally we had going and how good everyone played, until the kids had gone off to the arcade (we all pitched in so everyone could play).

Five couples sat at the long table, not talking. They were all pissed at me, it didn’t take a genius to figure that out, except maybe for Steve’s dad Ray, who seemed to think like me, who’d had my back when things got out of hand and jumped into the fray with gusto.

“In a way,” I said with a look of deep consideration on my face.

“And you finished it?” Brendan’s dad said.

“What? What are you talking about?” she said.

I looked over at Ray, who took a swig of lager, raised his eyebrows, clenched his mouth, looked down.

“Well,” I said, “you can’t let the kids think people can just run their mouths like that.”

“Is it that big a deal?” said Brendan’s dad. “So they were crabby, whining. We should tell the kids to be above that.”

“We should tell them to challenge that,” I said. “And anyway, to be challenged, to be treated like you’re strong, worthy of defeat, is a compliment.”

“I’m not sure what that means,” Brendan’s dad’s wife said.

“Again, what are we talking about here? What game?”

I didn’t want to answer, and I knew my wife, whose silence radiated anger and embarrassment, didn’t want me to either. So I stayed in that zone between the alpha father who would claim space and the beta father who avoided real opposition because you knew what would happen.

One the way home, as we passed all the mini-mall grids and vegetable fields, we talked about weekend plans, watching a movie, summer barbecues, Bailey. All of this was brought up by Michelle. None of it got us talking, so I steered the conversation elsewhere.

“So, next week will be better Michael,” I said. “One more game. We gotta finish strong.”

Michelle said, “Can we stay away from that topic right now?”

“Are you traumatized Michael?” I looked in the rear-view mirror.

“Probably more traumatized at being on the bench.”

“Listen, Michael,” I said, “what happened today wasn’t an ideal situation. But sometimes people try to take things from you. Invade your space and try to take over.”

“Don’t be afraid to compete for that space, Michael,” I said. “And remember, we have all kinds of that competition. It’s everywhere.”
Michelle shot me a look but didn’t say anything. I kept quiet after that. We all did. The only sounds the rest of the drive were the engine, classic rock at low volume, the whistling of wind that smelled like lettuce through a cracked-open back window.

Session 18: Michelle in her own words describing the end of the season
I don’t have much to say. I have to talk about the “buildup”? I want this first part on record, that I really don’t want to talk about it. Or the game, really. But I guess I have to.

So the big news was (not counting the hearing the league had called to discuss the game with the Braves), due to a couple illnesses and Porter’s family taking an early vacation, Michael would get a chance to start in right field, which was significant because the Yankees had a lot of left-handers and righties who “could take it the other way.” Upon receiving this exhilarating update, over the next few days Brent took Michael into the backyard after school to hit tennis balls from a tee into a net and play catch until dinner was ready. Michael would look back at me before following his father through the sliding glass door. I felt bad for him, but what could I do? Brent told me it’d be a chance for Michael to show he belonged and was deserving of a bigger role, and I let it go. It was only one game. If Michael was awful, it’d diminish Brent’s vicarious energies since the season would be over. If he succeeded, well, maybe it embed in him a type of confidence. My son I mean, not Brent. Well maybe him too. Probably him too. Above all else I just wanted the whole thing to be over. I prayed the league wouldn’t schedule a make-up game with the Braves.

On Thursday, Big Game’s Eve, Brent came into the den. I was reading, and Michael sat crossed legged on the floor playing a video game.

“Gonna be ready tomorrow?” he said.

Michael looked up at his father, and back at the TV.

A soldier shot lasers from a huge gun at a robot with pincher hands. Michael moved his body left and right as the soldier dodged the pinchers.

“What game is this?”

I answered from the couch.

Brent looked at me.

He watched the action for a second, chuckled. “You’re fine,” he said. “Nice and relaxed. You’ll be ready.”

He walked off to the living room. When he’d disappeared, I said to Michael, “You excited for tomorrow, honey?”

Michael finally killed the robot, and took a deep breath before sending the soldier into a new area.

That’s about all the buildup I can muster. About as much as Michael could. 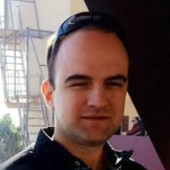 Zack O'Neill earned his MFA from the University of South Carolina. His work has been supported by two fellowships, the James Dickey Fellowship and the Houston Writing Fellowship. His work has appeared in The Oklahoma Review, Kudzu Review, The Homestead Review, and elsewhere. His novel The Blue Stoop was a finalist in the 2010 Faulkner-Wisdom Creative Writing Competition. He currently lives in Sacramento, and works as an adjunct English professor.