Imagine a world without sexuality or gender norms, where every character (not just the quirky sidekick) lives at the edge of things: on the street, in the trailer park, or nowhere at all, because they’ve all been exiled from America’s split-level ranch comforts, given up for lost or left for dead. Imagine the scary stories that grownups should be telling their children as they come of age: a lovelorn girl torn between her best friend and her dream boy faces ghastly consequences if she can’t prove her heterosexuality; a date rape victim comes back as a zombie, sweetly obsessed with her attacker’s scent; a boy comes to terms with his best friend’s pubescent girlhood and history of abuse.

Now imagine that in this world, love fuels every story.

This is the world of Alana Nöel Voth’s Dog Men, billed by publisher Tiny Hardcore Press as stories that “cling to you like only the most personal and upsetting dreams can… Voth’s characters are people you know, and yet nothing you could have imagined.” I would add only that Dog Men offers something that the published canon needs quite desperately: vivid portraits of love, in literary colors exceeding what once passed as the visible spectrum.

In “Reservoir Bitch,” Voth takes a realist approach to a similarly familiar-seeming situation. Best friends Spike and Rand are getting too old to pretend anymore—Spike is becoming a woman, despite her best tomboy efforts, and Rand is becoming a man. But the darker and more disturbing story under the surface compels Spike and Rand to make hard choices about masculinity and femininity; strength and weakness; violence; and vengeance.

Likewise, in a light-as-air narrative by Ro-Ro, a masochistic teen boy hopelessly in love with the title character, “Marcelle” plays with mainstream understandings of strength and weakness, as well as sibling rivalry and brotherly love. Marcelle might read as a bully, if she were not also hopelessly in love with Ro-Ro. Herein lies the charm of the story, and the charm in every story in this collection: however difficult the themes presented here, however outlandish the worlds Voth builds, love turns every conflict on its head, reveals the bully as slave, the weakling as savior.

Voth’s characters struggle to reveal their identities gracefully. They often fail to gain what they seek in love. Yet most of them know exactly what they want. It’s just that their appetites and explorations oppose those of the mainstream. “Brighton,” for example, offers a great illustration of how a Voth story can shine a light on the perversity of “the norm:” your garden-variety date rapist is shown to be, clearly, more repulsive than your garden-variety brain-eating zombie.

This is strong, mind-blowing stuff, done in graphically clear language. For me, Dog Men’s sexual and horrific elements are reminiscent of Miranda July’s short stories, in that there is no flirtation here, just unapologetic, in-your-face bang. What really counts is the time and space around sex and violence, not the acts themselves.

Share Dog Men with a reader whose mind is ready to open, preferably a reader who already has a wide-open heart. 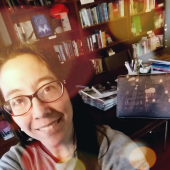