Everyone's Gone to the Moon

If you ask me, the moon was full.

It was a weeknight in the middle of summer and I stood barefoot on the waffled white plastic swing of our backyard swing set, looking up at the moon. My brother, two years older, had his battery-operated transistor radio set up and his sleeping bag laid out on the ground. (Need I mention that he was the one who made it to Eagle Scout, and I was part of an entire Cub Scout troop that mutinied after just one year because the snacks sucked?)

My mother stood on the concrete step outside the door that opened into our backyard. She was almost hidden by the hibiscus on either side of her, but I’m sure she was twisting her wedding ring around on her finger with her thumb, the way she did when she didn’t know what to say. She wore her blue housecoat and her J.C. Penney silk sleep bonnet, which she wore to protect her Andrews Sisters hairdo. (Mary Pat Morrison rolled and set my mother’s hair every Thursday afternoon in the beauty shop in the back of her house. Mary Pat has long since passed away, and my mother’s hairdo no longer reaches up quite as close to heaven, but she still goes to the beauty parlor every Thursday afternoon.)

She stood alone when she first came outside, but eventually went back inside and woke my father. She persuaded him to come out and look at the sky with the rest of us. It was hot and muggy and the air stood as still as we did as we stared through it.

I stood up on the swing and watched the moon.

“What have I told you about standing on the swings like that,” my mother said. She worried that I would topple the whole thing over because my father had not anchored the swing set into the ground with anything. For my mother, even with big goings-on in the sky, the rules here on earth hadn’t changed.

My brother gave me that look—the look that older brothers have given younger brothers throughout history. Well, maybe not the look that Cain gave Abel right before he picked up the shovel, but certainly the look that says, “You did not just say that.” It’s the look my brother gives me now when I tell him that, yes, I really do believe that Bono cares about Africa even if he wears really expensive sunglasses.

It was July 20, 1969 in Lakeville, Florida, and Apollo 11 had just landed on the moon. Neil Armstrong had taken his first steps and spoken his now-famous line, only it wasn’t history yet; it was just the moment—and we had all just watched it happen live on TV. Well, my dad had slept through it, but that’s another story. I had never seen Walter Cronkite seem at a loss for words, but then Walter Cronkite had never seen a man walk on the moon before.

After Neil Armstrong stood on the moon for a couple of minutes, my brother and I were the first ones into the backyard. I was sure I would be able to see something on the face of the moon that would let me know that we—notice I say we—were up there.

Just a week earlier, my brother and I had stood right there in our backyard and witnessed the rocket launch. We watched the rocket carve its way through the sky leaving behind nothing but a trail of smoke, a trail already vanishing as the booster engine dropped off and fell into the ocean—the very same ocean that we had splashed around in. The rest of the rocket ship soared on, leaving the rest of us behind in the grip of gravity.

In celebration of the real moon launch, my brother and I had sent up—or blown up—five Estes rockets. We cupped our hands over our eyes and watched the cardboard rockets fight against the sky. They didn’t fight for long, but at least some of them made it off the ground. Now we were watching men on the moon.

This was in an era when folks in central Florida would pour outside when a rocket launched, looking to the sky in amazement. Our vantage point seemed perfect since Cape Kennedy was only a couple of hours away. If a launch happened on a school day, classes were let out and teachers and students alike piled out amidst the jungle gym and monkey bars to watch the astronauts do what most of us would never do—get the hell out of Dodge. Oh sure, folks in my tiny hometown went to Orlando ten miles away or to the beach an hour or two away, but Armstrong, Aldrin, and Collins were going to the moon. The moon! It takes more than a Rambler station wagon and a six-pack to pull that off.

I wondered what that kind of getting away felt like. I was nine years old.

A million miles from the moon, my mom was back inside the house turning off the television. She was leaning against it (the thing was about the size of a freezer) when my brother and I came back inside. Latching on to a soon-to-be-classic quote as only an English teacher can, Mom looked at us and repeated, “ ‘One small step for man; one giant leap for mankind.’ Boys, who knows what might happen next.”

She had tears in her eyes. She gave us each a hug and told us that, man on the moon or no man on the moon, it was time to call it a day. She went right to bed. I hope she had good dreams. It was her thirty-ninth birthday.

My brother and I stayed behind in the Florida room. The television crackled with static electricity, still with a faint glow across the screen—like it couldn’t let go of what it had just seen any more than we could. My brother stretched out on the green corduroy couch, the one with the fabric that left you all striped and grooved when you napped on it, and I sat cross-legged on the floor.

After a minute-long eternity of silence, I asked him, “Now what?”

As the glow on both the television screen and on my face started to fade he said, “Tomorrow you and I send up another rocket, that’s what.”

With that, he got up and headed off to his room. He stopped at the door and told me, “You and I aren’t staying here forever. Mark it down.”

I can’t swear that I knew exactly what that meant, but I knew that my brother meant it. I lay there in my bed that night thinking about what I’d heard. It wasn’t Neil Armstrong’s words that were running around in my head. It was my mom’s and my brother’s.

“You and I aren’t staying here forever.”

OK, I thought. My brother was my trusted guide, my Neil Armstrong, and I was ready to follow.

I lay awake, my Western Auto fan whirring against the quiet and the summer heat. The moon wasn’t in my window so I fell asleep watching the window screen dice the night into a thousand tiny black holes, just big enough to let some moonlight in if it came my way.

And I hoped it would. I fell asleep dreaming.  I’m sure of that. 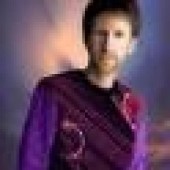 Gregg Hubbard lives in Nashville, Tennessee--or that's where his bills go, at least. A full-time musician and some-time teacher, his writing can be found in print and on the radio. He still has four years of college football eligibility.