Saturday morning, I head to Melvin’s Music, an East Side music shop wedged between a nail salon and an Indian restaurant, where I teach drums and theory to kids who want to play like Nick Jonas and to middle-aged men who want to become the next Tre Cool or Lars Ulrich. Regardless of age or goal, they’re uninterested in learning theory and technique, and refuse to accept that drumming is more than picking up two sticks and randomly hurling them into shiny noisemakers. Their denial, eventual realization, and revisited denial creates a revolving door of turnover that I have a hard time explaining to the shop owner, Melvin—who is the physical embodiment of Lennie from Of Mice and Men—when he grills me for answers on a weekly basis.

During today’s lecture on retention and customer service, I empty self-control reserves I didn’t know I had to prevent myself from confessing how I’m only here every weekend to profit from the shards of my shattered dreams. Outside of his East Side small business that reeks of spicy aerosol chemicals, I have a piece-of-shit day job just like the brass instructor who’s a staff writer at the withering San Jose Mercury News, the violin instructor who teaches the English classes at juvie, which she refers to as “boarding school for the underprivileged,” and the guitar and bass instructor who makes hemp jewelry in his mother’s garage that he sells out of the back of his Tic Tac-orange ’74 Honda Civic.

The only person who isn’t here out of financial hardship is the flute and saxophone instructor because she’s locked into a six-figure gig with the San Francisco Symphony and only teaches here to pass time and hand down life lessons to drummers who turn over students quicker than a continuation high school.

Post-Melvin harangue, I head to my studio where an eight-year-old boy whose mom uses me for cheap daycare tells me that I’m “a boring lady who sucks” because I’ve made him do nothing but hit quarter notes into a drum pad since he started taking lessons. Out of protest, he spends forty-five minutes kicking the wall in conjunction with his pad strikes, and every so often hurls his sticks toward the drums in the corner of the room.

“Wayne Kramer said, ‘learn music, not guitar,’ ” I say. “Once you can hold steady on the drum pad, you can move to the snare.”

“Who the eff is Wayne Kramer?”

“Is that one of the Backstreet Boys?”

“My mom likes them. You’re probably thirty like her, huh.” The remark socks the proverbial wind from my lungs. “Do you drink a whole bottle of wine when you listen to them?”

I let him hack nonsensical racket into the drum set until my 11:00 a.m. shows up, and hassles me for the next hour about teaching her to play the drums like Nick Jonas so she can go to his concert, storm the stage, and impress him with her “mad skills.”

“I really want to marry him,” she says.

“What about aspiring to become someone like Karen Carpenter or Sheila E?” I ask.

I shut my eyes and roll them under the safety of the lids. “I hate to quote my mom who, I later found out, plagiarized Valerie Solanas when she told me, ‘Eliminate men and women will shape up,’ but it’s pretty applicable for your situation.”

She glares and folds her arms with her sticks in hand. “I told my mom that you say a lot of weird things. She said you probably do a lot of drugs.”

“Is my mom back from the bar yet?”

At 12:15 p.m., two failed lessons and one no-show later, and nothing but an empty roster block ahead of me, I lock up the percussion studio and head out to the parking lot where I run into the flute and saxophone instructor, Kerala, and by run into, I mean she steps over me because I’m squatting on the curb beside my rust-infested, gas-guzzling, manual windows and locks, no-AC, hasn’t-passed-a-smog-test-since-before-I-was born Chevy, whose hood is slung open and engine waiting for a good Samaritan to offer a jump. She isn’t one of them because she daintily tucks her peach-colored skirt under her thighs and lifts her heeled feet into the cab of her silver BMW.

“Your ride lose its mojo?” she asks. “You should start your students doing scales on the xylo. They can hear if they’re hitting unevenly. On a drum pad, well, nobody gives a crap.” She pulls her door shut before I can volley a rebuttal, and burns out of the gravel lot, kicking up dust clouds that huff against the Chevy and my “washed-out” face.

A few minutes later, the guitar instructor comes out of the shop for his midday toke and offers to give me a jump in exchange for buying two of his handmade hemp necklaces. “How long you been waiting around?” he asks as he pockets my soggy ten-dollar bill. 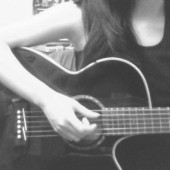 Lavinia Ludlow is a musician and writer born and raised in the Bay Area, California. She currently resides in San Francisco and London. Her debut novel alt.punk, published by Casperian Books, explores the ragged edge of art, society, and sanity, viciously skewering the politics of rebellion. On March, 1st, 2016, Casperian Books will release her sophomore novel, Single Stroke Seven, a narrative that sheds light on independent artists of a shipwrecked generation coming of age in perilous economic conditions. Her short works have been published in Pear Noir!, Curbside Splendor Semi-Annual Journal, Nailed Magazine, and The Molotov Cocktail, and her indie lit reviews have appeared in Small Press Reviews, The Collagist, The Nervous Breakdown, Entropy Magazine, and American Book Review.