When the white girl was over, she liked to explore where I lived. She wore the wifely woman’s slippers with her own gel inserts. A gel my company did the ads for. She’d found the ads on a worst-of list and connected me to them through intuition or internet. I refused to discuss work. The rhymes signaled in my head like flags: she put the gel in Magellan. I hated her imperial stride.

Nothing to the Imagination

The wifely woman and I went to a movie to imagine something far from a real child. I’d always hated child actors too young to fake it. The wifely woman liked their innocence unable to hide. This time, we saw a flick with a cop and a robber. It was hard to tell who was the good guy, but it was important to know, or at least guess. “Why is there so much nudity in violent movies?” the wifely woman said. I said, “You did say nudity?”

We had a while to decide hide or seek. The boy, I assumed, slept over in the hospital. I guessed he didn’t have a step-dad? I guessed his mom was holding onto more than hope? My history was crock-full of overestimating myself. That’s how I’d always kept abreast of life. The wifely woman had come back from business and meant business. I feared that part of her that could execute Powerpoint. How to graph the boy, I wondered—I’d never made a winning presentation. The last game of hide and seek I played, I had stayed lost.

Isn’t This How That Works?

On the beach, someone stapled pages, never out of his box. Technically, I had taken vacation. I hated to be reminded. At work, I had to turn off my wants. My business was generic wishing: bodies, mostly. I wanted a body, too, of course. But more so, I wanted something less sellable. The stapler on the beach set me off. I wanted to burn edges. I wanted my wants to have nothing to do with anyone else. Now, as if in another life, a boy owned me. I kept watch over him in the waves. I had screwed his mom, long ago. I tried to think: vacation, or paternity. I had insurance, but against wants?

She Was a Tsunami to His Earthquake

I noticed my life shaken. The wifely woman had accepted my bastard, but this was not disaster. She said analogies would get me nowhere. I had zero response. I didn’t know where I stood on acceptance. I self-medicated. I sent bottles drifting out into a sea of garbage. The earth never answered. I thought, Destruction is nothing. The wifely woman recycled. The boy asked what was made with all that plastic, and I said, more plastic.

My Life Was Always Drunk Dialing Me

Midday the wifely woman called me at work and said, “Here’s the thing about working.” We ran out together for drinks. We drank until we knew our jobs would barely suffer us, and then we returned to work and texted. I got sloppy, but I sent the text to her about a sexier girl in the ad before I sent the email to the big boss about real sex. My wires were always crossing. I got a message back from the wifely woman to get my job off my mind. I texted her: which of these me’s did she want to survive, because one of us wasn’t going to make it?

The State of Consumerism

Work was a joke with no punch line. Sometimes, for shits, I would pretend Dumbo ears was a friend. I asked him about foosball, and when he mentioned the Niners, I said, “I said foosball.” The company cut off our computers to games, trying to make the internet humorless. But how did they think we were going to sell anything, if we couldn’t laugh as we lost ourselves?

The white girl always prepared something to set us afloat. She baked goods out of drugs, surprising from how clean her hair smelled. I met her after work and she stuffed a cookie in my mouth and pumped my jaw like a well handle. Soon this was funny, as if we were wasting water in a drought. “You’re so stingy with your love,” she said, her laughter not coming off. I insisted “Puff, puff, pass.” I sprawled on her floor and texted the wifely woman about a beer with a friend. She texted back that she and the boy were finding old photos of me with the beard I’d abandoned. She had a way with words. “Be here,” the white girl said, “at least when you’re here.” I was nowhere. The river was rushing beneath us. I tilted my chin, testing for thirst.

It wasn’t all sunshine and moonbeams, is what I mean. The things we never had to do for the boy: 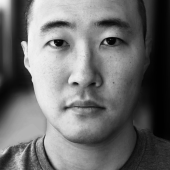 Matthew Salesses is the author of a novella, The Last Repatriate (Nouvella Books), as well as two chapbooks, Our Island of Epidemics (PANK) and We Will Take What We Can Get (Publishing Genius). He was born in Korea and adopted at age two, and currently lives in Boston with his wife, new baby, and cats. His stories have been published in Glimmer Train, Witness, Pleiades, American Short Fiction, The Literary Review, and more than forty others, and have received awards from Glimmer Train, Mid-American Review, PANK, HTMLGIANT, The University of New Orleans, and IMPAC. His nonfiction has appeared in the Good Men Project, The Lifted Brow, Make Magazine, Koream, and others. He received his MFA from Emerson College, where he edited Redivider, and now serves as Fiction Editor and a columnist for the Good Men Project.