by Swoon and David Tomaloff

Swoon on the Exit Strategies Videopoems

I worked with David Tomaloff before on other projects, and I loved his poetry and his style. I asked him if he was interested in doing a videopoem-chapbook, and he gave me a link to Exit Strategies, a chapbook he had written early in 2011, which was published by Connotation Press. “They’re a bit dark,” he told me. “Great,” I thought, “Dark is my middle name.”

I loved the atmosphere of the six poems. I loved how they related to each other. My first idea was to create a ‘main theme’ for the soundscapes. I wanted them to be the mortar of the videopoem-chapbook. For the images I used a lot of footage I shot in the fall of 2011. Blurry images, dark brown, fading. I was looking for a desperate feel.

I wanted each video to have a title that was a single word from the text of its poem. Those words/titles gave me a first direction about where to go to with these.

The overall ‘storyline’ I put in these videos is a personal one, but others might see or pick up different meanings. I just hope they evoke something. It doesn’t matter if it’s not what David or I intend, but that’s the fun of poetry and videopoetry.

Notes on Exit Strategies (The Poems) by David Tomaloff

Exit Strategies is a collection of six prose poems, each serving as a kind of monologue or vignette voiced by one of six different—or maybe not so very different—speakers. Ultimately, my hope is that each reader will come to his or her own conclusions in terms of finding a sense of meaning within the text, but what these words deal in is the sense of a universal longing to survive: at the heart of each of these pieces is the threat of impending force bearing down on the speaker, whether it is the sea, the city, the government, or an agent of the natural world. There is in each of these pieces a unifying question, and that question is, without a doubt, “what next?” Also implied, though, is a question of boundaries: who in these pieces is the aggressor? Who in these pieces is the real trespasser?

In terms of the multimedia project, I had worked with Swoon in the past and my sense was to let him do what he does best. My part in the presentation was simply the recording of the poems themselves, in which I sought to unify the voices by reimagining the pieces as field notes read into a recorder by an observer who is becoming increasingly embroiled in what is being observed.

{I} HOT KNIVES WILL MELT INTO THE EMPIRES OF FLESH ON THE CONTINENTS OF THEIR SOFT, SUPPLE THROATS. You can stay up all night burning powders in their names, but they will come for you all the same. The dawn, to them, it does not exist. You are never alone in the being alone, and the wolves will open up, show you the light if you let them. Let them, you will not. You will hold knives over flame and count beats between the calls of crickets. Hold fast. Steady now, and breathe. A circular motion. The turning of a screw. A radio going silent in the warehouse of a mind. A temple. A refinery. A steelhead. A trap. The judge and the judged, both waiting for the click.

{III} I dream in killer question marks because there is a war outside. I’ll stand in the rain to burn myself clean because I blister in the sun. City brakes squeal from thin-wearing pads, and the cabs continue on, all rickety and mean. I’m holding hands with saints in orange corridors, built from dead husks of abandoned subway cars. Their names are alive in aged hues on the walls, and they are bleeding into the cracks that have begun to form in the parietes of my heart. I’m sorry I haven’t written in a while. I’m sorry about the anonymous picture postcards. I forget. I tore a note into my arm to remember. It healed, and I soon again forgot. The buildings are silver bullies in the daylight, hulking graveyards by night. Please send a flare, a map, or a compass. Send me a slingshot, or a prayer. I carry the old photographs, but what can be burned is sacrificed for heat when the giants falter to the dusk. The salt in the air is burning at our mouths. THE SEA IS RAVENOUS WITH REVENGE. There is a flood on the horizon tonight, and the guards have begun to desert their towers. THE WATER HAS REVEALED US IN WAYS WE COULD NEVER HAVE IMAGINED.

About Swoon: Swoon is a Belgian video-artist/soundcreator. Poetry, words and dreams form an important basis for his work. As a stranger in our midst he recycles ‘virtual’ internet images, shoots his own, creates soundscapes, and makes dreamlike, moving paintings out of it all. A dream made real out of vague bits. Swoon’s work has been featured at numerous festivals. He’s also an autodidact…

About David Tomaloff: David Tomaloff is a writer, photographer, musician, and an all-around bad influence. His work has appeared in several anthologies and in fine publications such as Mud Luscious, >kill author, PANK, Connotation Press, HOUSEFIRE, Prick of the Spindle, and elimae. He is the author of the chapbooks 13 (Artistically Declined Press), A Soft That Touches Down & Removes Itself (NAP and Red Ceilings Press), Olifaunt (Red Ceilings Press), Exit Strategies (Gold Wake Press) and Mescal Non-Palindrome Cinema (Ten Pages Press). He resides in the form of ones and zeros at davidtomaloff.com. 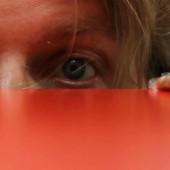 Swoon (aka Marc Neys) is a composer / video-artist from Belgium. As one of the leading and most prolific figures in modern videopoetry he has made videopoems for and with writers from all over the globe and has inspired new creators through his workshops and showcases on videopoetry. His works have been selected and featured at festivals all over the world. Web sites: http://swoon-videopoetry.com/ http://vimeo.com/swoon https://musicfromnoone.bandcamp.com/