From June 2010 to May 2011, Jesús Ángel García took his transmedia novel, badbadbad, to the streets, asking people from coast to coast for their personal take on the book’s central themes of fear, hypocrisy, e-intimacy, sexual morality, and self-destruction v. redemption. These candid interviews yielded nearly 80 gigabytes of raw footage, edited by García into a five-part, feature-length documentary film, which San Francisco Chronicle called “shocking for its revelation that technology somehow encourages us to be more intimate than we otherwise would be.” As the project developed, García was surprised by how the interviews both underscored and challenged the ideas explored in the text. “Fear” is the first part of the film, which you can purchase in its entirety on DVD or digital download at badbadbad.net. 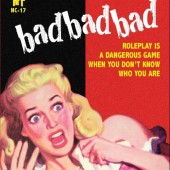