It is December 31st. Maybe the longest day of the year. Lonesome, I spend much of it listening to Father and Preacher in the parlor and wondering if angels’ wings make sounds when they fly.

To feel this way is a sin, but I would not look at my own reflection in the mirror, not wanting to see Father’s dull eyes in my skull. But the mirrors are all gone now with most of the furniture and the animals. Long gone like Mamma and Tom and Sarah. Gone since last December 31st. Left the empty house that would have been sold as well, except for Father holds it in common with two far-off uncles who would not submit. Father lost most all he owned, except for his father’s guns, hung above the front door.

This morning I walked downstairs well after sunrise, my father nowhere. I ate breakfast at the lonely table and watched the front yard, and hours passed. He runned off, I fancied, and I thought on what I might do if the farm were mine. Then, the sound of Father’s truck coming up the drive. I watched out the frosted window as the car door slammed, and Father hurried round the front of the truck, rifle in hand. Out the passenger side, Father dragged some figure with a burlap sack over his head and poked the figure in the ribs with the barrel of the gun ‘til the groaning man stood up and stumbled in the direction of the house at Father’s direction. In the house, Father tied the figure to a splintery chair in the parlor and pulled the sack from the head of Preacher, screaming through a bit of oily cloth shoved in his mouth.

I watched on from the kitchen, arms crossed, the doorway between the two rooms forming a crude frame for the scene before me. “Why the sack?”

Father looked over his shoulder, as if noticing me for the first time. “Huh?” he grunted.

“Preacher knows where he’s at. Been here many times. Why then the sack?”

“Get thee behind me, son of Shelomith,” Father shouted at me and turned back to the hare-eyed preacher. He picked up his gun and yanked the cloth from Preacher’s mouth, then Preacher really got to screaming. “Yell all you want to,” Father said. “Ain’t no one around to hear it. You seen to that.”

“What do you want, Jonathan?” Preacher shouted, straining against the rope that held him to the chair. He would not best Father’s knots.

“You said the sky would open. You said this was the year.”

Father looked past Preacher, out the eastern window. “Year’s almost done,” he said.

Preacher looked up at my father. “You will see, Jonathan. You will see.”

I could see the little green germ inside my father seething, growing even faster when Preacher said this. Father squeezed the barrel of his gun like he was choking up on a bat. He could bend the barrel if he wanted to, I wagered. He let loose of the barrel, and made a move towards Preacher. It is awful that something as big as he can move so fast. With one hand, he turned Preacher’s chair clean around, so that Preacher faced out the window. Preacher got all red-faced and pleading again, but he quieted up when Father shoved the barrel against the back of his head.

“I sold all I had for belief in your preachin. My wife up and left me. Took my young ones. My son ain’t got no regard for me. We’re gonna sit here Preacher, you and me, and if we make it to midnight, you ain’t gonna make it no further.”

Preacher said, “The Lord told me-”

And that’s where we stand now. The night has come.

“I got no claim left to anything in this world,” Father says. “Not even my faith.”

“Well that ain’t altogether flush. I do own one thing.”

He means the gun, I think.

I sit on the stairs and listen to Preacher try and use the only weapon he has: his tongue. He won’t be successful. My father’s will is the only thing I still respect in him, and it is strong. He is set on revenge, and he will have it.

In the town, they will be readying the fireworks.

“You still have a chance Jonathan.”

“There is still time. The Lord will forgive you.”

Stillness. Preacher glances over his shoulder and sees me sitting on the stairs. Father nudges his head towards the window with the barrel.

“In Heaven, it won’t be like this. There will be no division among you. Your wife, your children. Your namesake, over yonder. They will stand beside you.”

For a time, there is quiet. Then my father says, “Do you really believe the things that you say? Are you a liar or are you crazy?”

Preacher shakes his head, never taking his eyes away from the horizon, away from the eastern sky. “I am not a liar. I do not think I am crazy. I had a dream that was not like a dream, and in the dream the Lord spoke to me, and the Lord showed me the end of the world. And I told my people. That is my job.”

I don’t know how my father reacts to this. I cannot see his face. But I know my father’s will is set.

Father sold off the clock, but we all know midnight approaches.

“Please, Jonathan. Do not tarnish your soul with this sin.”

“If what you say is true, you have nothing to fear.”

The Preacher begins to cry again. “You’re right in what you say. My heart is feeble also. We will see. We will see.”

The time draws nearer. We all know it.

“Whatever happens, Jonathan, remember that I have children of my own.”

“Stand by your word, Preacher, and you have nothing to fear.”

Somewhere, I do not know where, Mama is watching the sky. Sister and brother are watching with her. And they are happy together.

“I have money, Jonathan. Enough for both of us. My parishioners are generous.”

“Expect you better be quiet now,” my Father says.

The eastern sky is lit by cascades of blue and red and green from the town just beyond the tree line. It is not the light of Heaven. They sound a faint call, like gunshots, and I wait for a call to answer them from within our parlor, explosive and final and just.

“Just do it, Jonathan. Just kill me.”

Outside and not too far away, the fireworks continue to crackle. It is the only sound worth hearing.

The gun rack was once too high for me, but that ain’t the case anymore. I reach above the door, the way my father used to do for me when we’d go out shooting. It’s loaded. It’s always loaded. Preacher is crying again, and Father is working at the knot around his hands. I stand in the parlor’s door frame. I aim quick, and I aim true.

Father looks over just before. “No,” he says.

I don’t even hear the bang, but it leaves a high pitched voice in my ears, like an angel child holding a single note. Preacher stiffens as the bullet travels through one side of his head and out the other, taking the side of his skull and some of his soul with it, I suspect. He topples to the ground, still tied to the chair.

Preacher’s blood spreads across the floor, and Father just sits there watching it. He is silent. Or I think he is, I can’t tell for a time. After a bit, the angel stops singing, and Father says, “It’s a sin what you done.”

I think on that for a moment. “You brung me here,” I say.

Outside, the fireworks are still going. They do it big in town.

Father looks at the gun in his hands. “I can still fix this here. They’d think I was the one who shot him. They’d all know why.”

“Reckon that’s true,” I say. “If you can follow through this time.”

“Your mama always said I was a willful man,” he says. He’s still staring at his father’s gun.

“I thought so too,” I say. “I’m going outside to watch the fireworks, Father.”

My father looks up at me and smiles. “Alright, son.”

We live far enough out that you can still see the stars, pale blue tonight. Not falling from the sky or anything. I watch the fireworks and wonder if Mama and Tom and Sarah are watching the same ones. They’ll come back home now, I wager. Fireworks been going for a good fifteen minutes. They go off so loud, that I can hardly hear anything else. Going off so close, you might think the bang’s coming from just inside my father’s house. 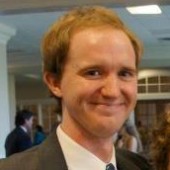