Thoughout 2019 I produced haiku videopoems — AKA video haiga or videohaiku — on an almost industrial scale, churning out 80 short videos in seasonal chunks rooted in one or the other of my two homes in Pennsylvania and the UK: Winter Trees, Pennsylvania Spring, Summer in the UK, and Autumn Metropolis. I’m calling the whole series Crossing the Pond: A Translatlantic Haiku Sequence, and I’ve compiled the best into a YouTube playlist with a run-time of under an hour. For Atticus Review I’ve made a new video combining five of these videohaiku shot of, or from, trains — a unifying theme of the series. I’ve also included Sea Levels, a short haiku sequence (renku) shot on a section of the Welsh coastline especially vulnerable to climate change, where recent storms have uncovered the remains of a forest flooded by earlier sea level rise during the late Bronze Age.

Skills learned in crafting modern haiku can be readily transferred to videopoetry and vice versa. Both succeed when they merely suggest connections rather than stating them outright. Both rely heavily on the juxtaposition of two or more different images for their effect. Further, masters of both modern haiku and videopoetry have stressed the importance of a kind of openness or incompleteness. Ogiwara Seisensui characterized haiku as a circle, with one half to be completed by the poet, the other half by the reader. Tom Konyves, who invented the term videopoetry, stresses the collaborative or synergistic properties of individual elements (text, visuals, audio) in a videopoem. “This collaborative property implies an incompleteness, indicating the presence of accommodating spaces in each of the elements,” he notes.

A further argument for marrying haiku and videopoetry is the long history of combining images and haiku: haiga, a genre which has been exported to the West as well. But most important, to me, is the way that the video/film medium can give haiku what they often lack on the page: necessary time and space. It’s not unusual for printed collections to isolate just one or two haiku on a page, surrounding them with white space in an effort to slow the reader down. It’s been said that haiku are the perfect form of poetry for our distracted, sound-bite-dominated society, but actually I feel the opposite is true. Even when I am away from all digital distractions, I still often have to keep admonishing myself to read more slowly. How slowly? Maybe something like half a minute to a minute per haiku … about the length of a short video.

I gather material for videohaiku in the same way people tend to gather material for regular haiku, walking slowly and keeping an eye out for small, odd things. My phone camera is always in my pocket, and I usually carry a notebook as well, because often while I walk I’m composing haiku in my head in response to footage shot on previous walks. So the writing flow and the perceptual flow often merge. The most common form my videohaiku take is similarly slow and contemplative, inviting viewers to enter the flow from which the text eventually emerges. 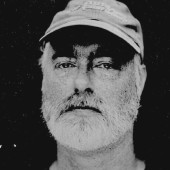 Dave Bonta (website, Twitter) is a multimedia poet and web publisher from central Pennsylvania, living in a classic Appalachian hollow in the upper Juniata watershed. He's best known for the influential poetry film blog Moving Poems, and his own videopoems have appeared in festivals around the world. He recently published a book of dystopian haibun called Failed State, and his 2017 collection of ecopoetry, Ice Mountain: An Elegy, was a finalist in the Banff Mountain Book Competition. He's nine years into a slightly unhinged, decade-long project to make an erasure poem out of every entry in the Diary of Samuel Pepys, posting the results to Via Negativa. Other on-going projects include a series of haibun videopoems with the working title Pandemic Year, a hyper-local daily microblog called The Morning Porch, and photo haiga at his long-running Woodrat photohaiku blog.