After a forest fire near the photographer’s house in Malibu, an important decision is made about the homeless child I found — whether to take the child home or to take its picture, repeatedly. Secretly, after viewing crisp negatives of the child hiding under a bridge in the rain, the photographer confesses his pride is injured because the child will not trust a stranger following with a camera. For some reason, after I view these images, drinking merlot, I contemplate suicide, listening to a recording of live cello music. My overdose occurs during a concert late at night, after a thunderstorm as the child slumps under my balcony, waiting out the rain, still humming music I almost remember. Before my stay in the hospital, the child found me unconscious, barely breathing in a parking lot where I don’t remember falling and where my car wasn’t parked. I recover from exhaustion in early spring, after the images are developed, but the child refuses to follow me home because he is afraid of the photographs of naked women on the walls. He says he doesn’t want to live with me inside the photographer’s house. After a gallery opening, the photographer says he feels like giving up because something embarrassing happens to me (I cry) every time he tries to sell his tasteful photographs of the homeless child to wealthy clients, collectors — mostly older women searching for surrogate mothers. These women were once actors, models, beauty queens, trophy wives. They say they cannot carry their unborn children in their bodies, so the biological children made from their frozen eggs are always homeless and must search for other homes, needing the bodies of poor women to house them and carry them safely to the wealthy mothers waiting. All these women are photographed in the nude by my lover. He knows how to make them appear young again, even though they look twice my age when I tell them why the homeless child won’t follow me home. 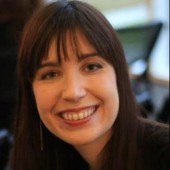 Aimee Parkison is the author of “Woman with the Dark Horses” (2004, winner of the first annual Starcherone Prize), “The Innocent Party,” (2012, BOA Editions, Ltd.), and the short poetic novel “The Petals of Your Eyes,” about kidnapped girls who become actors in a secret theater (2014, Starcherone/Dzanc). She has taught creative writing at a number of universities, including Cornell University, the University of North Carolina at Charlotte, and Oklahoma State University, where she is currently an Assistant Professor of Fiction Writing. Parkison has also received a Christopher Isherwood Fellowship, a Writers at Work Fellowship, a Kurt Vonnegut Fiction Prize from The North American Review, a North Carolina Arts Council Fellowship in Prose Writing, and a Hearst Fellowship from the American Antiquarian Society. See more at www.aimeeparkison.com.