At night, when you get up for frequent trips to the bathroom, you can hear rustling inside the wall. At first it’s loud and energetic, but it gets slower and fainter with the passage of time.

Bad bird, bad. A woodpecker made a hole in the wall of your house and then another bird—surely an opportunist, a trespasser, a squatter—built a nest in there.

A handyman covered the hole with cement and painted it over. He was a big, bald man, tattooed and beer-bellied. “No way the woodpecker would peck through now,” he said.

Neither would the trespasser, with its softer beak, working from its confined space inside the wall. The damn thing will die on its eggs soon. It will learn its lesson. Respect the rights of others. Don’t mess with the powerful. Know your place.

“I don’t think any bird is trapped in there,” the handyman said when he finished with the hole. “Its partner would’ve dived at me. Even if it were trapped, it won’t stink. It’s too small.”

Even if you were a bleeding heart, what could you do now? You couldn’t get the handyman to open the hole in the middle of the night. And you aren’t handy yourself.

By late morning, the rustling stops. The handyman was right. It doesn’t stink. Of course, it’s too early to tell, but you have a feeling that it never will. You trust your feelings; you have to trust something if not someone. You can fall asleep now, but you keep turning and tossing in your narrow, claustrophobic bed, your hands weak like clipped wings. 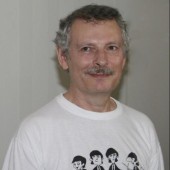 Mark Budman was born in the former Soviet Union and is fluent in Russian. His fiction, poetry and book reviews have appeared in such magazines as Mississippi Review, Virginia Quarterly, The London Magazine (UK), McSweeney's, American Book Review, The Bloosmbury Review, Sonora Review, Another Chicago, Sou'wester, Turnrow, Southeast Review, Mid-American Review, The Literary Review, the W.W. Norton anthology Flash Fiction Forward, Not Quite What I Was Planning: Six-Word Memoirs by Writers Famous and Obscure, Short Fiction (UK), The Warwick Review (UK), Flash (UK), Neo (Portugal) and elsewhere. He is the publisher of Vestal Review, the longest-running flash fiction magazine in print. His novel My Life at First Try was published by Counterpoint Press to wide critical acclaim. He co-edited the anthologies You Have Time for This (Ooligan Press) and Sudden Flash Youth (Persea Books/WW Norton). He is at work at another anthology and two new novels. He has judged several flash fiction contests.