He comes alive again & calls them

ancient crabs & I don’t correct him

though I know they’re trilobites, he

reaches down & feels their smooth

along their ridges & appendages,

their sharp protrusions, moves his

thumb across their compound eyes.

in stereo, complex eyes that caught

light into far distances, the first

complex eyes on our planet, & then

thinks of Tatjana & the creatures

vanish into the shades of grey &

grey & grey into lumps of rock

that fight the sea & he heads along

the beach passing a carcass of a

beached whale torn across the shale

& he walks through the gulls that

tear at the entrails trailing out into

the angry blue & the foam at his

feet whiter than the color of his skin,

whiter than the clouds painted above

& finally he becomes a small dot,

a hazy spot quivering within my eye. 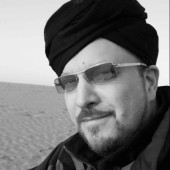 Marc Vincenz was born in Hong Kong during the height of the Cultural Revolution. His recent poetry books include Upholding Half the Sky (MiPOesias, 2010) and The Propaganda Factory, or Speaking of Trees (Argotist, 2011). A collection of translations is forthcoming from Cervena Barva Press. Recent and forthcoming publications include The Potomac, Spillway, Poetry Salzburg Review, Inertia, elimae and Pirene’s Fountain. Marc is Managing Editor of MadHat Press, Poetry and Non-Fiction Editor at Mad Hatters’ Review and on the editorial board of Open Letter’s Monthly.