My mother’s sex addiction. My father’s Parkinson’s. My grandfather’s depression. My grandmother’s dependency. My aunt’s cancer. My older sister’s rehab. There’s the prophesy. There’s Fate. How to cut that thread. What action to take. If only I could be certain that I were eluding, rather than meeting, the destined doom. Maybe then I could step outside.

The gods don’t grant such certainty to mortals. Certainly, not to me, more nobody than Oedipus, a son of a King, a savior of Thebes, the destroyer of monsters.

Here’s something people forget about Oedipus. To save the town of Thebes, he had to answer the riddle of the Sphinx: “What goes on four legs in the morning, on two legs at noon, and on three legs in the evening?” His reward? The Theban Queen. Later, after he is king, Oedipus must solve another mystery: “Who killed King Laius?” The queen’s husband, the missing king who once, a long time ago, was told his son would kill him and marry his wife.

Uncertainty paralyzes me. I fear any misstep that might set in motion the trap the gods have set. I lie in bed, listening to Nick Drake. Nothing moves. Not even a twitch. Still. So very still. So that I cannot catch the eyes of the gods, waiting. Let them wait. They have all eternity, though. And I have only this one life. It doesn’t seem fair.

Oedipus, who now has come to represent the mother-fucking father-killing desire of all boys, once symbolized something else. The smart guy. The riddle solver. The know-it-all. Human intellect pitted against the knowledge only gods know. He knew everything, except the most essential thing of all: “Who am I?”

I am the still guy. The myth that persist in stories is that epiphanies must be earned through action. Never passivity. Never stillness. Never from lying. Never from nothing. Why did the answer come then. “What punishment do the gods have waiting for me?”

We are defined by our punishments. Sisyphus the rock-roller; Atlas the world-bearer; Prometheus the bound one; Narcissus the frozen one; Echo the oversound. What were they before? One quickly forgets their crime, remembering only the fate the gods imposed upon them afterwards.

The answer to both riddles Oedipus found, not in the world, but elsewhere. He is the baby who crawled on four legs, the man who walks on two, the future self-blinded old man walking with the cane, the prince fleeing from a fate only to kill a man at the crossroads who turns out to be his father, the man who saves a city only to be married to his mother, father of his brothers and sisters, the evil that must be rooted out for gods to be appeased. He is the answer to all riddles. One wonders who is laughing at the joke.

This is it. Of course. The punishment the gods have set. This is it. 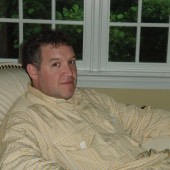 Randall Brown teaches at and directs Rosemont College’s MFA in Creative Writing Program. He is the author of the award-winning collection Mad to Live (Flume Press, 2008), his essay on (very) short fiction appears in The Rose Metal Press Field Guide to Writing Flash Fiction: Tips from Editors, Teachers, and Writers in the Field, and he appears in the Norton Anthology of Hint Fiction (W.W. Norton, 2010). He has been published widely, both online and in print, and blogs regularly at FlashFiction.net.