In the far distant future there was a zoological forest-park where ancient species of humans were kept in artificially natural habitats. They’d been forced to live this way for generations and their will had been broken to the degree that they didn’t really know or remember anything else. Among these humans a small group had begun to retaliate by trying to achieve the ultimate act of resistance: suicide. The keepers–who were human but had greater powers than the ancient species–were aware of this growing tendency toward self-destruction. For them it became an ongoing nuisance.

It was an overcast and hot day when the air was hard to breathe and the sun did not shine. The keeper-general was called over by one of the guards to a spot in the forest. There he found a body in complete tatters. The chest was ripped in half, the ribs were sticking out, the skin was missing, and human flesh and muscle were exposed. It looked like a brutal murder but he knew it was a cover-up for a suicide. He bent down over the body and started gathering the pieces of flesh and skin. He bent the two halves of the chest and cracked them back into place. He massaged the torn muscles. And before long the woman was back to life.

She stood up with an angry but defeated expression. The only evidence of what had happened was a small piece of dry skin on her neck. “Don’t try it again,” he told her. “You see there’s no point.” She looked at him defiantly, though it was clear that she had nothing with which to fight. Not even her life. The keeper-general watched her as she walked away, thinking about how she’d have to live the rest of her days with the knowledge that she had committed suicide and that it hadn’t helped. 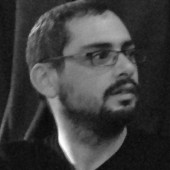 David Stromberg is a writer, journalist, and translator. His fiction has appeared in the UK's Ambit and the online KGB LitMag, and his fourth collection of single-panel cartoons, BADDIES (2009), was called "fantastic" by The Los Angeles Times. He writes on contemporary art for The Jerusalem Post Magazine and has contributed to The Forward, Haaretz, Tablet, Believer and other publications. He is co-translator from the Russian of Polina Barskova's The Zoo in Winter (2011), and his translation from the Yiddish of an unpublished Isaac Bashevis Singer story titled "Job" appeared online in The New Yorker (2012). He was born to ex-Soviet parents in Ashdod, Israel, grew up in urban Los Angeles, and currently lives in Jerusalem.