FDR comes to me in my dream. We’re in a small mail room. The walls are lined with pigeon holes crammed with letters. We sit across from each other in our wheelchairs, our knees almost touching. He has an erection. Between his polio-shriveled legs, it looks huge, straining against the fabric of his trousers. It’s unnerving at first, but you get used to anything in dreams.

Of course I ask him what death is like. He says death is boring. More boring than you can imagine. Death has no smell, color, texture. Death is gray cardboard. FDR complains that he forgets what pussy smells like. I try to comfort him. I tell him it’s like fresh raw oysters heated to 99 degrees Fahrenheit. He likes that answer. He sighs, pussy. The word slips from his lips like a promise.

After a while, he asks what my problem is. I tell him. It depends on the day, but it’s usually along the lines of being a cripple is exhausting. He relates whatever problem I am having with some anecdote about getting one over on Stalin. It’s always about how FDR had to swing his dick around to get some concession out of the Russians over the Curzon line or whatever. He riles himself up until he’s yelling about how he was one comment away from throwing his crippled ass across the Tripartite dinner table and chewing off Stalin’s mustache. I guess Stalin was always making comments about the Bill of Rights or FDR’s legs. Two sore spots for him.

He calms down quick enough and, after a deep breath, he dishes out the advice I am seeking and the dream ends with FDR saying, “I shit you not.” It sounds like an Amen when FDR says it.

The power and the glory are yours. Now and for ever. I shit you not.

And you know I wake up with my head swirling with facts about Germany’s post-war denazification and a sense of peace with my lot. FDR is like that. Despite his obsession with pussy and fucking Stalin’s mustachioed trash hole, he has some good advice.

FDR’s advice for putting up with able-bodied people’s bullshit:
1) Visualize launching yourself from your wheelchair and grappling with the patronizing cunt. Cling to his throat with the impressive strength you’ve gained in your arms from pushing yourself around his inaccessible world. See yourself biting off chunks of flesh from his shoulders and face. After you spit out each mouthful, hear yourself telling him what abuses you will heap upon his corpse. This should start with, but not be limited to, the war cry, “I will fuck your dying trash hole.”
2) Eat out their wives at the first opportunity.

FDR said this kind of positive visualization is what got him the presidency. I shit you not. 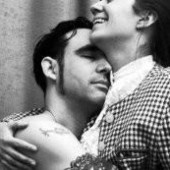 Jarred McGinnis is an American living in London. He is Wicked to Mock the Afflicted and a co-founder of The Special Relationship.