Everybody knows there are individuals who mechanically include the penis into bonds and into rings. And then they cannot withdraw it. Sometimes it is a ring of copper or of iron, or a golden circle, or a metallic ferrule. At other times it has been a piece of thread, a riband, or as was seen, the socket of a candlestick, anything elliptical and often steel, to be passed down the penis as far as the testicle, sometimes to include this testicle depending on the nature of the thing you’ve found. Everyone has a different setting. Different things or rings around. Different things to don, if left alone.

If left strangling the penis, the urethra will perforate, so watch out.

Ligatures of thread, cord or riband will never seriously embarrass a professional man. He will cut this off with scissors or a bistoury and be done, and eat outside, in loose pants. But to disengage a circle of ebony, ivory or horn, strong scissors are needed, sensational nippers are necessary, and should be used—immediately, BUT a cutting diamond, in the case of metals, would be good to have in your house, in the drawer.

You can’t just walk by this drawer now: You’ve strangled your penis and you can’t pull the thing off, the ring down, which is not from a wedding, not a class ring of graduation, not the telephone not ringing, you can’t—not without pulling open your whole penis and dumping it out.

The ring is too far down. To pull it off the penis would be an explosion, it would be the rotting, the final burst, of the fun. Unless it is of extraordinary thickness, the hardest circle would probably not resist a couple of hand-vices. So look in your drawer, for hand-vices. Is the swelling now excessive? If possible admit some linen into the ring so as to cushion the penis against the action of the instrument. Do you have it? Did you find the hand-vices yet? The saw and the file, of the hand-vice, use this across rather than in the long direction of the penis. DON’T cut yourself. Don’t try to do it too slow. Are you sure you know nobody any longer? Don’t tremble by the hollow phone, if there is no one. Go to the bathroom. 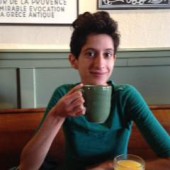 Caren Beilin's novel, The University of Pennsylvania, is recently out with Noemi Press and her fiction chapbook, Americans, Guests, or Us, is available from DIAGRAM/New Michigan Press. Her stories are in McSweeney's, Caketrain, and Fence.