If the evening goes well, she invites her dates home to watch her die. She positions them in front of the monstrous television, sixty-four inches, where every bit of Amy’s body is thoroughly exposed. Her pores are caverns, her moles landmarks. The bare body on the screen is a decoy that hides the real her, the fearful her, from her date who will get the treat of watching a maniac strangle her with horse reigns on SVU. Or he’ll see a coroner pretend to carve her like a butcher on CSI. Amy is a capable actress who never expects to be great but will equally never be out of work because she happily accepts the roles that kill her off quickly.

“Wanna see my reel?” she asks Greg, preemptively switching off lights to highlight the fact that the television is larger than anything else in the dingy apartment.

“What do you mean your reel?” He’s pulled a shabby wooden DIY coffee table close enough to rest his ankles.

Her date is too tall. The gap between his shoes and jeans is pasty white with black hair sprouting loose. When he breathes, she hears the air wheeze in and out with an annoying hesitance. Small things make Greg jump. He’ll be easy to scare, she tells herself. Easy to send home when she’s tired of his company.

“My audition tapes. Remember, I’m an actress.” She wields the remote and he nods dutifully. No one believes because she’s forgettable. Her clothes are monotone. Her voice, white noise.

“Yeah, I’m game. Are you any good?” He turns his attention to the flickering screen and drapes a heavy arm along the sofa’s back. Amy is grateful the secondhand couch extends far enough to let her recline just outside his grasp and maintain the necessary distance she’s created.

They met at Starbucks. He followed her from counter to bulletin board where she snapped shots of events she had no intention of attending. He handed her his phone number scribbled on scrap paper. She mixed it with other numbers she’d scavenged. Rottweiler puppies ready now. A barely used, hardly touched laptop for sale. Amy called Greg Wednesday night when her apartment was silent and the nagging urge to hear the wind crept under her skin. Call him or throw yourself out the window, she told herself.

It was less work to pick up the phone.

“You said you were an actress, but you didn’t say you were famous.” He’s impressed now and leans forward, because on the screen he sees that she’s elbow to elbow with celebrities. But his smile snaps shut like an overstretched rubber band when the murderer slices her open. Amy remembers that first death. She’d opened her mouth to scream and instead gasped gently, falling two seconds earlier than she should have. Later, in the makeup chair as they adorned her caramel skin with wounds and bruises, she didn’t recognize herself. And it was such a relief.

“I can’t,” he protests, but the next death is brutal and holds him hostage. Bullets slipping in and out of Amy’s body like breath. They’d asked her to lie nose to pavement as still as snow for minutes. She learned to breathe down into her belly as though cemented to the ground, so that her back wouldn’t rise. It was the closest to real dying that she’d ever experienced. More intense than two suicide attempts lacking the right producer. More intimate than watching her father die from breathing up, his cancer-ridden chest rising and falling like angry waves with no port.

Amy worries most about the men who stomach the entire seventeen minutes of the film. They fall in love with the girl on the screen, styled and abused, versus the girl on the other side of the sofa who smiles a little and cries a little. With each shot she feels a release of the anxiety that drags along beside her like a shadow every day. She worries she’ll never be good at anything, or that she’s too good at dying.

“How did they, it looks like she really snapped your neck.” Greg cranes his own neck to study the shot. He snatches the remote from her and freezes the frame. He’s an accountant and clearly needs numbers to explain what’s going on. At least he’s not turned on by the violence. Amy keeps a line of heavy flashlights next to her bed and sofa, just in case. She has no intention of dying by anyone’s terms but her own.

“First they had me flip upside-down, like this.” She demonstrates to him that it’s all a ruse. Movie magic.

Amy catapults herself over the back of the sofa, and the blood rushes to her face, her red hair grazing the carpet. It’s a giddy feeling, but then Greg’s hands are along her back. She reaches in vain for the flashlights, ready to crack him across his hairline only he’s not trying to choke her. He hauls her up, and she notices that his hands are abnormally large and resemble spatulas, flipping her over.

“That’s a good way to hurt yourself,” he scolds. He’s not watching the screen anymore, even though Amy’s image is frozen. She’s much more fascinating in the film clip than in real life. “I’m still hungry.”

He heads to her kitchen and rummages through the refrigerator, scavenging leftovers. Amy worries that the white cardboard boxes are expired and may poison him. Past dates have charged out of the apartment, disgusted. Past dates have charged into the bedroom, fascinated. But she’s never had anyone treat the deaths so casually, as if she and her profession are normal.

“Don’t.” Amy whisks away the containers into the trash, unearthing a skillet and dropping an oil slick in the center. “I can cook.”

“I’m allergic to peanuts.” He watches his hands, embarrassed. “I could die.”

Amy smiles and pulls out ingredients that won’t put him in danger. She appreciates taking care of someone in a room that isn’t where her dates usually end up. “Don’t worry,” she promises him. “I’ll be careful.”

And she means it. 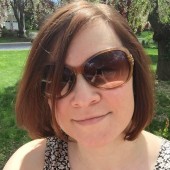 Sarah Clayville's poetry and fiction can be found in The Threepenny Review, StoryChord, Literary Orphans, and a number of other journals. A native to Central Pennsylvania, she is an assistant editor at Mothers Always Write and a high school English teacher. Further works and musings reside at SarahSaysWrite.com.