Tabby’s ex used to beat her real hard. One night was particularly bad. He drove off half-lit from the house, lost his pay at the reservation casino, came back smelling of Seagram’s and Swishers. When Tabby asked if he got lucky, the ex knocked her all around the house. He often took his fists, big lumberjack’s hands, to her chest and gut because the face, well, too many questions. But that time, he went at Tabby powerball, and popped her strong enough to break a tooth and loosen an eyeball.

Next morning, the ex made his Folgers, spun the sugar with his pinkie, nuked some Jimmy Deans. Even made her a plate before he went to the lumber mill. Tabby shook loose a molar, got cleaned up, and pulled her old Remington 870 from the garage. She loaded it with big mother turkey shot, worked out the logistics.

“Trigger, toe, and boom! done,” she said to herself. “Easy peasy lemon squeezy.” She spent an hour thinking about it, refilled her coffee, working up the courage. Sitting on her hands, over-caffeinated, she rocked back and forth saying, “woo-ee.”

When the heavy-hitter came home from his half-day, Tabby was waiting on the couch, watching General Hospital, clenching the 870, her third cup of joe still steaming. Lumberjack held up his hands. “Listen, Tabs, I can change,” he pleaded. “Let’s get away. Let’s go places. Tabs, let’s — ”

Offering him a broken-toothed smile, she pulled the trigger and off came half his head. Good ol’ turkey shot, did the trick every time. Tabby patted herself on the back and finished her coffee. She turned up the volume of her soap as it finished, put what remained of the lumberjack into the big freezer outside.

Not a neighbor for miles, not in those hills, but Tabby still waited ’til nightfall. Can’t be too careful, she said. When it was finally the witching hour, she put the ex into a Hefty bag and tied a rope ’round him and a toboggan.

Stepping across her backyard, Tabby considered the silence. She paused, slowed her breathing, balanced in the snow, listened. It was there, palpable, millions of cubic feet of air pressing on Tabitha; yet it was not there. It was as if all of Creation paused. Was still.

“Time for a sleigh ride,” she said, looking at the cadaver on the sled. “Let’s get away. Let’s go places, motherfucker.” She slid her baggage across the backyard. Her destination: the river in winter.

Exhaling, Tabby continued to trudge on snowshoes foreign and clumsy — and began to hear, in the distance, the groaning, the cracking of the hillside. A bit farther, in the thick pines sheathed in ice, Tabby heard the thumping walls of the glacier. Cresting the hill, she saw the river. Above it, the glacier, the inexorable, heaving frozen river, calving, shedding sheets of blue ice into the water below.

Tabby smiled. That frozen river — grinding everything before it, rendering all human thought and desire puny and inconsequential — was her talisman.
Skittering out on the moving surface, Tabby positioned the toboggan near a nascent crack, left what remained of her ex to nature, then crab-walked back to safety. Soon, sooner than she’d thought, the glacier split, and the toboggan tumbled into the freezing water. Bubbling a bit, it bobbed, swirled, then sank under the dark blue surface.

“Look out below,” she said, feeling a whole new Tabby.

That winter she did indeed transform herself. Tabitha the strong. Tabitha with the TV turned off. Tabitha tracking elk by moonlight over the misty mountains. Tabitha bathing her bruises and broken bones, lifting weights, buying dove loads for the 870, eating off the land.

Of course, it didn’t last.

When spring came, and the state patrol came ’round to ask about some bones and a shattered skull they found snagged downriver, Tabby gave it up right away.
“Was it the beatings?” they asked, looking at the permanent bruises, the wobbly eye, the busted teeth.

“He loved me in his way,” Tabby shrugged as she was being cuffed, “that was nothing. I could’ve lived with that. But he was so unhappy. He just didn’t belong here. So I gave him back. I put him where he belonged. Into the frozen river. Don’t you see? I did it for him.

“Now,” she shrugged, “not even the frozen river wants him. It spit him up like rancid meat.

“Now I’m stuck with him again, one way or another.” 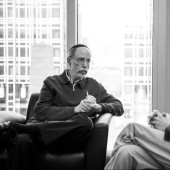 Abby Mendelson, Ph.D., teaches writing and literature in the Chatham University MFA program. An award-winning author of numerous works of fiction and non-fiction, his most recent novel is The Oakland Quartet. Tacoma resident

Vincent Rendoni has an MFA in Fiction from Chatham University. He released his chapbook, In the Methow Valley, in 2011, and has previously published in The Rind, Shady Side Review, and FictionBrigade. Their flash fiction has appeared in Fiction Southeast, Lime Hawk, and Burrow Press Review.