Grad-student-poor, they keep to the afternoon’s plan, / free tickets to a
college basketball game. / It’s better this way: / 18,000 fans means no
silences to fill, / no talking over where crib, changing table, the glut / of toys
to come will go. It is too early for him to worry / over logistics; he is
thinking of how he’ll support them all. / He is thinking like a man /
overwhelmed.

They find their seats two rows behind a basket, / close
enough to hear grunts and sneaker-squeaks / as the young men cut and
weave along the court. / She whispers in his ear, / I didn’t know he was
this good, pointing at one of her students on the team, / this moment of pride in
the young man good practice / for the future.

They enjoy the atmosphere,
the impromptu rendition of “Rocky Top” / the crowd erupts in after the
visitors / call timeout to slow the game, / to halt the home team’s crushing
momentum. / She sees a contest on the Jumbo-tron, takes her phone to text
the number and enter, / but he notices too / they’re now on the screen
hanging high over center-court, / the Kiss-Cam begging for one peck. / He
nudges her arm, tries to get her attention so he might / enjoy her lips, but
she stays buried in her task. / He tries again before the crowd turns / against
her, hisses circling the arena until the camera cuts / to another couple who
obliges quickly, / who wants no part of the same admonition. She asks why
there was such noise, and as he explains, / it’s as if she wants to curl herself /
back into her own mother’s womb. /

He watches another minute or two,
but feels her squirming next to him. / She asks him to leave / and turns up
the aisle, head down, until she reaches the mezzanine. / He grabs their coats
and follows, thinking of joy / and how it’s always balanced with its opposite,
/ this moment one she will never share without much suffering / with their
son or their daughter to come, / as though she was responsible for this new
life / being booed from the start. Another knock, another nurse come to check on / her blood, to take it and
label it and spin it in a centrifuge, / separate each part for analysis to see / if
her TPN needs a new recipe. A dash more sodium, / maybe potassium, a
bump in lipids to plump / what’s still so gaunt and dehydrated. But three
sticks / still can’t find any vein’s X, /

so flustered, the nurse small-talks
them both / to distract them from her mistakes or calm herself, / the man
can’t say, but it works. The three native Midwesterners / compare south to
north: customs, food, people. / She sells them on the rarity of digging a car /
from a three-foot snowdrift as the vials fill red. / She mentions how she and
her husband adopted / Volunteers basketball, men’s and women’s, cut off as
they are from their Hoosiers. / He mentions they enjoyed the game they
went to / so soon after finding out about this child. His wife / adds how
they had to leave because of the Kiss-Cam. /

That was you? the nurse says.
My husband and I / were at that game. We saw you two. / He fake-calculates the
odds, settles on some / very, very large number to one. He sees his wife’s
cheeks redden / for the first time in a long while when she replies, / I didn’t
know. I was trying to win a basketball. / He sees she’s somewhere else. Maybe
she’s wondering / how one person she’s never met before could be part / of
two such low moments, then how she’d take back / that one not-kiss if she
had any power. / Though he can think of a dozen thoughts filling her, / he
refuses to guess further. Shame has carried her / somewhere sickness hasn’t
touched. 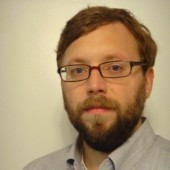 Michael Levan has work in recent or forthcoming issues of Iron Horse Literary Review, Copper Nickel, Ruminate, and Hunger Mountain. He is an Assistant Professor of English at the University of Saint Francis and writes reviews for American Microreviews and Interviews. He lives in Fort Wayne, Indiana, with his wife, Molly, and children, Atticus and Dahlia.