I was jealous that Karen had made friends with two ghosts, even if their parents had left them in a ‘70s VW Bug to sink into the rising floodwater that winter. She already got to spend time with one of her moms, Ruth, cutting triangles and squares for the hand-stitched quilts they sold at goddess festivals and in coffee shops to tourists who wanted more blankets even though I’d heard most of them had insulation and didn’t need woodstoves. So I boasted to Karen that a comforting hand always rested on my shoulder when I walked up the stairs to my front door, and that I could hear groans from behind the boarded up door that used to connect the bathroom to my parents’ bedroom. Sure, the moans were probably wind widening a crack in the wall, and they were incoherent compared to the detailed conversations Karen reported having with her two dead peers, but at least someone in my house wanted to speak especially to me.

That way, it didn’t matter that my dad worked overtime climbing telephone poles and I mostly saw him when I woke up at midnight with his ear to my nose, making sure that I was breathing. Missing him after he left at five in the morning made me feel ungrateful that he’d saved up to insulate our home and install a new woodstove to replace the one from the 1950s. Because of his long hours, I lived in the fanciest house in my canyon, which made it easier for me to ignore the “summer people” who came from San Francisco asking how I “survived winters in a cabin.” Some of them bought vacation homes from Karen’s other mom, Judy, homes outside of the flood plain with foundations and without the typical wall holes and leaking aluminum roofs. At least I didn’t have to anticipate a ghost friend falling apart like the shaky structures we all lived in then.

Unlike Karen, I knew my grandparents only through other relatives’ anecdotes, and whenever my mom took me on case work home visits, she compromised the excitement I felt at meeting elders who told me firsthand stories. On one such visit, a lady named Olga, who had pretty white hair, had urged me to sit on the kitchen chair with a cushion, handing me a pink flowered teacup with a gold rim. She opened a cabinet. “I suppose I’m out of tea.” I insisted that I wasn’t thirsty. “But I haven’t met a child yet who didn’t like something sweet.” Her back stiffened lower and lower as she opened one empty cabinet after another, finding the carton of C&H granulated white sugar empty as she shook it in my teacup. “My son hasn’t had a chance to go grocery shopping.” And then she started to answer my mom’s questions about her “experiences of political persecution and migration” growing up in the Soviet Union.

Karen and I grew up only a few miles down the river from Olga, but my friend stared at me blankly when I relayed Olga’s coming-of-age anecdotes to her, and especially when I told her about the car ride back with my mother. I had been imagining what it would be like to have tea with a grandmother who could tell me stories about surviving exile, institutionalized communism, and other things I didn’t understand but worried about, when my mom turned to me and said, “How could you reject her hospitality like that? She and her husband walked through Siberia to get to a ship to the U.S. She still asks his advice at that altar with candles in her living room. He’s the one who told her to let relief workers clean their house after the flood.” She grimaced at someone denying her the opportunity to help them. “But he didn’t want the home elevated.” Every time the stories dwindled and the forms were filled out, she had to insinuate that because of “limited mobility” or “histories of intergenerational trauma,” people I felt were surrogate grandparents might not live through another winter, isolated by mudslides, fearful of knocks at their doors. Some of her clients had drowned trying to climb onto shelves as floods entered their homes, and I didn’t want that to happen to Olga.

But it made me happy that Olga and the ghost in my cabin seemed to want to spend time with me. Sometimes my mom would quilt or weave with me, and I loved hearing how her great-great grandmother sewed silver into her skirts and the quilts that she had sold in Sweden so that she’d have money when she reached America. But the ghost’s heartbeat got ragged behind my ear whenever my mom got to the part in the story where that same great-great grandmother beat her sister’s daughter Lil almost to death. Of all things because the girl looked under quilts in an old sea chest and found the army uniform that her ancestor had worn to sneak out of Sweden on a boat, as if he was heading on a mission for the monarchy rather than deserting the country as an oppositional socialist. I didn’t understand how someone could fear deportation to Sweden, when it seemed a lot easier to find a job there than in the places some of my friends had left, places they missed but remembered as foodless. My mom’s Aunt Lil had survived beatings from her family and her husband and successfully published children’s books about anthropomorphic chipmunks, only to be beaten to death by an adopted son because she didn’t have any money left to give him for drugs. Somehow, I was supposed to take from that anecdote that quilting and writing were both profitable hobbies with precedents going back several generations in my family. All I took from them was that ghosts were the only ones that couldn’t be displaced by floods, hunger, and other people. The story reminded me how lucky I was that the drugs my neighbors took usually just caused them to be energetic and productive in their anti-government sign-making, or, in one case, to chase one of my friends down the street to the liquor store, waving a machete and screaming that she was his ex-wife back from the dead. Even if the ghost in my house had been an addict in life like Lil’s son and most of my neighbors, the posthumous lack of corporeality seemed to decrease the potential for chasing kids, haphazardly wielding knives, and murdering relatives.

But one day the hand on my shoulder as I walked up the stairs to my house became a yank that pulled me back down to the first step. When I told Karen, she accused me of luring her ghost friends away with the new woodstove and the insulated walls of my house, crowding the ghost already living there with unwelcome newcomers in the process. Because around the same time, she had gone out to the VW Bug to discuss what places were most conducive to haunting (she liked to plan ahead), and her friends were gone. To prove that I wasn’t winning over ghosts with luxuries like heat and elevation above flood levels, I offered to help Karen find them. We waited until her mom Ruth left to sell quilts, and then I stepped into the car, my feet sticking in chewing-tobacco pulp. Flies floated belly-up in a bottle’s last drops of Jack Daniels on the driver’s seat like amber-encased bugs at museum gifts shops. (I preserved dead spiders and scorpions with rubbing alcohol in old jars, since that was cheaper than buying these souvenirs). There were no playful undead eight-year-olds. So I followed Karen into the nearby creek to look for them. We climbed over branches woven together into a dam by the last flood, past molding newspapers, Swisher wrappers, teddy bears, lightbulbs, diapers, and chair legs, but I only picked up shards of cups that reminded me of the ones Olga let me drink out of.

Instead of ghosts, we found a beach. Just months before, the river had risen up twenty feet to reach and then cover the Hacienda Bridge nearby, from which I could see a few teenagers competitively diving today. I started washing the teacup pieces like I’d seen disaster relief workers cleaning neighbors’ dishes, except that I was scrubbing them with my socks in the same river water that spread sickness and water damage to begin with. Karen turned back toward the underbrush to see if her mothers had noticed our absence, worried about getting in trouble for wandering so far from the house without permission. Sometimes Judy came home from “selling a house” smelling like that woman she was seeing on the side and told Karen not to say anything about it or she’d slap her like she slapped that girlfriend for threatening to expose the relationship.

I planned an altar to convince the ghost to stay in my house, since that was how Olga talked to her husband after he drowned fishing where the river meets the sea. The tide came in and weighted his wading boots, so that he drowned stuck standing where he was, according to my mom. (I still couldn’t believe that after trudging through Siberia and taking a long sea voyage between continents, going fishing killed him). The pieces of porcelain with entwined flower vines on them would serve as centerpieces, since my mom wouldn’t let me have candles inside, afraid that I’d start a fire, although we often used oil lamps when redwoods knocked the power out. The pock-pored porcelain felt like the faces of rummage sale dolls I’d bought and resold after Karen told me of one that awakened nocturnally, hunting for a human finger to replace the one lost when a child dropped her. So petite were her hands that even the infant fingers she bit off with tiny, pointed teeth slid off her stumps, lubricated by fresh blood. Karen revised descriptions to resemble my dolls, consistently denying that the story ever changed. And I kept selling my dolls at the rummage sale weekend after weekend, afraid that one of them might just like the looks of my fingers, which I meticulously washed every twenty minutes.

Ruth came home a few hours later, still carrying the quilts she’d wanted to sell, and scared that Karen and I could have been hurt by branches and jagged rocks in the creek. By the time Ruth reached me by the river, I resigned myself to complaining to rocks about the ghost always waiting for me at my house, one day a reassuring presence and the next a leg tripping me down the stairs. When we got back to Karen’s house, Ruth put cartoon character Band-Aids on my fingers, which I’d cut while washing the jagged porcelain in the river. Judy came home later with a bottle of brut from the Korbel winery down the road to celebrate selling a vacation home to another family from San Francisco. When I got home, no hand rested on my shoulder as I walked up the stairs, and I wondered if the ghost had left my house in search of one with a full tea set, like the one Olga left behind, except for that one cup, before she started that long walk. The next day at school, Karen apologized for accusing me of stealing her ghost friends. She had accepted that they were gone, maybe to another broken down car somewhere or to wherever their parents were. 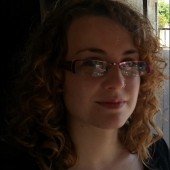 Jenny Irizary grew along Northern California's Russian River, where she learned to fend off drunk bats (and even drunker tourists) and to mutter even numbers in vain attempts to ward off yearly floods. She holds a B.A. in Ethnic Studies and an M.A. in literature from Mills College.