When a giraffe is born
it free-falls six feet from its mother’s womb
straight onto its stupid head.

Welcome to the world, Giraffa
camelopardalis. You already look like you are
dying and your name boasts

in a one-night savannah
stand, except that a giraffe would not fall
six feet from a leopard

because leopards just aren’t
that tall, and speaking of leopards, a lion
is 50% forecasted to eat

your face sometime this year.
Possibly the lion will be a hyena or crocodile
and probably one or more

of these animals will eat
the rest of you if and when they take your face.
You have many options in death –

in fact, far more than in life
where things will pretty much shake out as planned:
you will fall in love with a lady

giraffe and neck a boy giraffe
to prove your devotion to her, the way Katy Perry
made out with some girl and

liked it enough to marry
Russell Brand who she liked well enough to divorce
after two years, except that

your chances of being alive
for long enough to marry and divorce Russell Brand
are, according to science, slim.

Your tongue is a foot and a half
long – pretty cool, except this is only an adaptation
to get bugs out of your nose

whereas Katy Perry has solved
this age-old quandary by not having a gigantic nose
no offense. Your head is six

and a half feet i.e. four
and a third tongues away from your heart, which weighs
as much as two and a half

adult Maltese dogs and must pump
(your heart, not the dogs) more gallons of blood in one
minute than I drink of milk

in a year. Thinking about drinking
your blood grosses me out and makes me think of the time
my friend ate too much diner food

and coined the phrase “drinking a milkshake
backwards,” which is gross, too, but I can’t help it now, anyone
who reads this poem will think

about it now, which is the problem
with being human, which is why I envy you, giraffe,
even though your neck is both comically

long and too short to reach the ground
so that if you want to drink (water, not blood, I hope)
you have to spread your front legs

like an enormous, fleshy tripod.
I envy you even though you are so vulnerable
you can only sleep for five

going to have a nasty bump
from being born, whereas I went straight from the birth
canal into a giant hamburger bun

because that is how privilege
works, and I’m sorry, giraffe, but I didn’t ask to be
the dominant species, the little

spoon in life’s cuddle party,
the kind of animal whose body, whose very existence,
was built for sitting down.

Annelyse Gelman is a California Arts Scholar, the inaugural poet-in-residence at UCSD’s Brain Observatory, and recipient of the 2013 Mary Barnard Academy of American Poets Prize and the 2013 Lavinia Winter Fellowship. Her work has appeared or is forthcoming in Hobart, Nailed, The Destroyer, The Economy, and MARY. Her debut poetry collection, ‘Everyone I Love is a Stranger to Someone’, is forthcoming (Write Bloody, 2014). Find her at www.annelysegelman.com. 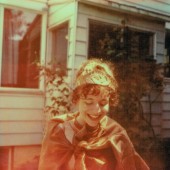 Annelyse Gelman is a California Arts Scholar, the inaugural poet-in-residence at UCSD's Brain Observatory, and recipient of the 2013 Mary Barnard Academy of American Poets Prize and the 2013 Lavinia Winter Fellowship. Her work has appeared or is forthcoming in Hobart, Nailed, The Destroyer, The Economy, and MARY. Her debut poetry collection, 'Everyone I Love is a Stranger to Someone', is forthcoming (Write Bloody, 2014). Find her at http://annelysegelman.com/