I am not a writer. I am just a regular guy trying to do good by publishing a decent, moral novel.

I’m a person, yes, but more than anything I’m a person . . . who cares: An average Joe changing the soggy diaper of his nonagenarian neighbor; a Green Thumb trying to harvest the plentiful land to feed a disintegrating nation; an art historian discovering, open-mouthed, hidden Communist imagery at Rockefeller Center.

But I don’t need to list my credentials. That list would be too vast and varied as to cause mass confusion and only serve as a distraction.

I’m not here to sell myself. I’m here to tell the story of a little boy and his miraculous Easter hat.

A father gives his young, innocent son a new hat for Easter. The hat symbolizes CNN, but don’t make this too obvious.

Easter is not a symbol for anything.

The kid’s mother gets cancer.

The kid sells his hat to buy his mother her favorite candy bar, which symbolizes a p*nis.

(Insert a visit from a mysterious old man who prophesies about the hat’s healing powers. This gives the kid hope, even though the old man is clearly a homeless pedophile.)

The sale of the hat leaves the kid twenty cents short of the candy bar, but his mother assures him it’s all right, chin up, that it’s the thought that counts, that Jesus would want it that way.[1]

I don’t know. I want the characters to be tragic. I want there to be traces of my own life, but I mainly want it to be an allegory for how government is like a broken, AIDS-ridden condom on society (or something like that).

Anyway, I want to accomplish something big. I want to write a book that people relate to, that makes them cry and scream and laugh and get hungry all at once.

I want to be as tongue-in-cheek as humanly possible. I will even staple my tongue to the inner wall of my cheek if that’s what it’s going to take, ha, ha.

I want to explain how different my p*nis feels now that I’m rich.

I want to explain that when I sing I sound like Mel Tormé.

People tend to think I’m weird because sometimes I dance in line at the movie theater. Sometimes I make funny noises.

I don’t want the story to be too sappy. I want edge. I want glitter tossed around.

Through subtle hints and mind control, I can use this story to illustrate my hidden messages.

I’m not the man the media elite suggests.

I have thoughts. I have opinions and feelings.

I know my freaking rights.

Did I pass out in my bathtub after overdosing on [doughnuts]? Yes.

Did I get blazed with a bong shaped like New Jersey Governor Chris Christie? No. That’s a lie James Carville spread at that Halloween party I wasn’t invited to.

I’m in the business of Truth, and, unfortunately, Truth has been commodified since Jesus Christ wrote the Holy Bible with his bare hands.

In addition, I want my novel to expose all the hidden Communist symbolism that penetrates (ha, ha) our culture.  Like the secret symbol of the Illuminati or the Artist Formerly Known as Prince.

I may not have a white picket fence, but I want one and I think that makes me profoundly, no, uniquely American.

Instructions to the ghost writer

I want you to write it like your soul is about to ejaculate.

Write like the mountaineer whose mountain has just exploded, like the sailor come home from catching the world’s largest swordfish and deciding, heart-in-mouth, to let it back into the sea.

Now, I’ve seen you eating lunch with the other interns.

I’ve watched out of the corner of my eye as you bend over to pick up a crayon off the floor.

I’ve listened as the other interns teeter behind your back about your crooked teeth, your barely-budding breasts.

But I want you to know that who you are is entirely defined by who you perceive yourself to be, not by the labels designed by others.[2]  And if others’ perceptions infect your perceptions then you are no longer you, but you are a you created by another You.  And that other You is Society, and Society is evil because it wants you to be a part of it.

So I say, “Fuck you, Society!” and then apologize later because if I don’t then I’ll have to spend more time dealing with media instigators and less time focusing on my ballet.

[1] Don’t make it obvious that the candy bar’s supposed to be a p*nis.  It does need to be phallic, though.

[2] Nor by the evil nicknames like “Stubby” or “Short Stuff” given to you by bully nurses and mean doctors as you are neglected and abused during your tenure in a moldy, godless hospital bed.  A bed whose sheets are changed daily by an intern! 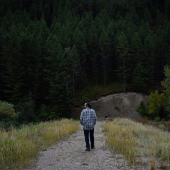 Isaiah Swanson is a writer, mainly of brief prose, living in Memphis, Tennessee. His passions include reading, writing, film, and community work. Some of his recent published material can be found in NAP Lit Magazine and Digital Americana.