In the bilingual collection Of Gentle Wolves, Martin Woodside captures the trends and confluences that define Romanian poetry of the last few decades, most poems being translated with the help of crisp-voiced poet Chris Tanasescu. In his introduction, Woodside states the biggest surprise was the difficulty in categorizing Romanian poets, a reflection of the “tumult and discord that’s characterized the last century of life in Romania, and life after the 1989 revolution” (vi). If anything, the common thread running through the various voices—some decades old, some fresh and pulsing with the blood of the new millennium—is the desire to re-invent the poetic form while never severing the bonds with Romania’s literary past. The reader travels away from a nationally defined inner space into the larger world of global conversations, only to circle back to the evolving Romanian consciousness.

Woodside’s collection explores the need for cultural anchoring within the European tradition. For instance Marin Sorescu imagines that Shakespeare possessed the powers of a Demiurge creating the world in seven days, only to be“ tired to the bone” before “he went off to die a little” (5). Radu Vancu’s drinking buddies are none other than the shadows of Thomas Aquinas, Mihai Eminescu (Romania’s staple poet of the 19th century), and Marx. In a similar vein, Angela Marinescu sits at an imagined table with “many poets/Mihai Draghici, Paul Vinicius, Eugen Suciu,/with novelists Ioan Grosan and Alexandru Vlad/and with a young woman, beautiful, quiet like a carnivorous plant in repose” (21), an indication that reaching self-awareness is a collective endeavor.

Even in the work of the earlier surrealist Gellu Naum, the poet returns to a mythical past of Romania’s almost unchanged countryside, where Alexander the Great is summoned by a local woman as he “passed one summer in his golden boat reading aloud and making small comments/…/hey there comrade Alexander the Great she would tell us don’t pretend you can’t hear/hey there Argonaut I’ll give you my golden fleece that is the law/I’ll issue a receipt” (7).

Often, the poets in this collection create a world that bothsimply isand one that speculates on the possibilities of the future. Unsurprisingly, there is an abundance of references to Romania’s partially healed wounds of anticommunist and post-communist struggles. In O. Nimigean’s Intermezzo, a voice reminiscent of old ballads sings out “ovidean nimigean/weeps all over the page/feeling pity/for this golden age/ovidean nimigean/a childish old man/fills with grief/for the Romanian” (37). The speaker snatches Romania’s old self from the past and drags it with him into his own, amorphous moment in history. Likewise, in Radu Vancu’s “Kapital,” the ghost of Marx still haunts the streets of cities and villages, where “in the pubs of Romania,” heavy drinking turns formerly complacent people into anarchists, until “you are already, in all likelihood, a perfect mystic/with the appropriate set of regrets at hand./It’s bad not to have guts.” Many of these poets are still trying to shake off the shame of inaction that defined intellectuals under communism and into chaotic democracy.

The newest poets in Woodside’s collection abhor the self-congratulatory rhetoric of those accustomed with suffering and look elsewhere for redemption. In Gabriel Decuble’s “Crippled Mutt,” the beaten dogs on the street become the city’s guardian angels, a sign that it is, perhaps, time to let the ghosts of oppression leave the country’s crippled body so that it can finally find a way to start anew: “particles rise yelping/particles limping through the atmosphere/light slobbered from the fierce staggering over the void/ dispersed/you don’t hear them you don’t see them/these microscopic particles in one in all/ damning them not to be damned/ so that they never end” (53). What’s left after the purging of Romania’s collective sins, Robert Serban posits, are “the dead resurrected from rain” (43). It is a bizarre world where people are picking up the pieces after some bewildering cataclysm, but there is much hope in within it.This volumes treats the present as an on-going question whose answer is somewhere under the rubble of history waiting to be unearthed. 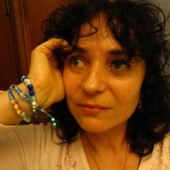 Liana Andreasen is originally from Romania, and currently lives in McAllen, TX where she is an Associate Professor at South Texas College. She holds an MA from Salisbury University and a PhD from Binghamton University. She has published academic work in Alecart, Texas Review, Quarterly Review of Film and Video, Southwestern American Literature, The CEA Critic. She has published stories in Fiction International, The Raven Chronicles, Thunderdome, The Horror Zine, The Willow Review, Mobius, A Journal of Social Change, Interstice, The Cloud Anthology, and upcoming in Scintilla, Weave Magazine, and Calliope. She received two Pushcart nominations (for fiction and for translation work).