Television deified suicide, deemed it suitable for combat, for the war, for the terrorists, for the Englishman who went to Iraq to build a bridge and came home needing a new head, but I am sick, even if still a man, educated enough not to be superstitious, though having faced that education arm-crawling to the toilet’s base to vomit.

Volume defied time, allowing a gallon of ice cream to disappear down my throat in a pizza’s cooktime, oven preheat included, but always a fag for fig, I’d top the ice cream with Newtons and eat Newtons between slices of pizza. A hundred forty Newtons a week filled the toilet; that made seventy servings, seventy-seven hundred calories of sugar and figs and corn syrup, and high fructose corn syrup, pulled from guts by rusty wrists to arrange away alone along the pipes beneath the apartment.

Hope grew glacial for families of hostages and prisoners; the television showed masked men behind a crying white woman, ready to AK that white away, and those troops tortured those brown people and the white people were upset, but really not too upset, and, you’ll die when you hear, and I’m sorry, I just can’t keep my mouth shut, but I remember this as very bad.

I needed to buy food: frozen French bread pizzas, generic Oreo cookies, a big-ass tub of cheap ice cream, graham crackers, milk, potato chips, tortilla chips, Fiddle Faddle, some chocolate bars–for the famine: to starve it. God does not need to use the toilet, not to see the ghosts of binges past, not to find the Koran that television says went down, not to find any toilet secrets.

Fear entails a certain existentiality, requires you to give a shit about what a gaunt, sickly man needs with twenty-five dollars of junk food, looking hardballed and back-roomed; it requires you to engage the engine behind the nerves and guilt and excitement of an impending binge. Fear entails knowing your weight on several different planets and being disappointed with them all, you diseased fat-ass seven-point-seven pound Plutonian piece of shit.

Television stays always on, there in the corner it sits, keeping company, keeping time for us, and I always visited the bathroom right at the best parts, right when the number of civilians dead hit a nice, round number, right when the Texan landed a fighter plane and said the War was over. I visited God, belly-confessing, beating the truth out of myself, never able to keep it all in, kneeling on the wet floor, still trying to hear the television through the burps and gasps and heaves even though television repeats itself every fifteen minutes, and I repeated myself.

I repeat myself: a sinner. 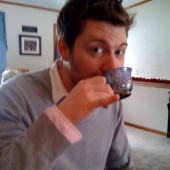 Kurt Mueller received an MFA from Southern Illinois University and now lectures professionally at the University of Wisconsin - Marathon County. His fiction has most recently appeared in Bull, Hinchas de Poesia, Specter, and The Big Stupid Review.