The Sand City Mall is T-shaped, and if you take the long stem toward JC Penney, you have to walk dead in the center, because if you veer to the right, the guys from Tradehome Shoes will jump out in denim shirts and Dockers and molest you about a new pair of hundred-dollar kicks; and if you veer left, the automated talking scale will sense your movement and ask if you’ve checked your weight today in an accusatory female voice like some slim bitch who goes to the gym ten times a week and never sleeps, and makes you feel like some shameful fat fatty in cheap stinky sandals from last summer.

Since Cole’s been sick, I’ve been mall-walking. There are things on both sides that are either deeply offensive or way too expensive, so I walk blind down the middle. There’s a giant metal bench there. One of the last times I was in the mall, with Cole’s brother Jesse, I started to panic, grabbed his arm and flopped down on the bench, pulling him with me. “Quit being pregnant,” he’d said.

It wasn’t that. “I want to go home,” I’d said, but only because we were in public. I would’ve said “Gool,” because that’s what we called the safe-zone when we were young and playing tag. I don’t know what it means—if it’s the bastardization of “goal” by a neighborhood kid with a speech impediment, or if it’s totally made up. We all say it: me and the Carters—Cole, Jesse, and Alex— every time we get back in our house. When you’re on Gool, nobody can mess with you.

We’ve lived on Gool for sixteen years. Most people in their thirties have clean houses, a couple of kids, a car made this century in the driveway, framed art on the walls. I’ve been inside a few grown-up homes and know what they’re supposed to look like. What happened to us? Maybe school—only Cole went, for two years of art, but it was good for nothing. He draws cartoons of bananas with feet and mice in kayaks and sticks them on the fridge. The other day he drew a crayon picture of Jesse with his stupid Bluto beard and hung it in our bedroom window facing out so that everyone who walks past our house, which is a hundred college kids a day, because we live on Frat Row, looks up and sees it.

When the Carter boys’ dad died, he left them a chunk of money, and they bought this dilapidated stucco monster on Fourth Street. I loitered there daily until I didn’t feel like going home anymore; then it became my house too. They chose it because it’s next to a laundromat, and they like the smell. Cole and I met in that laundromat twenty years ago. I don’t remember what I did or said to make Cole like me when no one else did, but I threw a cherry sucker in the trash and it landed in dryer lint; and he took it out and put it in his mouth. That’s the kind of boy he was.

When I first moved in, I followed the Carters around with Lemon Pledge and a Dust-Buster. Now I throw my clothes in a heap like everyone else, leave the cap off the toothpaste, my hair in the sink. If I was a man I’d leave the toilet seat up. When I get crabby about the mess and start to complain, Jesse will say something like we’re all going to die and good housekeeping won’t keep the reaper from your door, and then I’ll decide it doesn’t matter and throw my shoes in two different corners of the house, or cook a pot of macaroni just to let it congeal, uneaten on the stovetop.

This isn’t the first time we thought Cole might be stepping off Gool. Ten years ago I crashed his Plymouth Sundance into a big elm planted in the curve of a back road. Cole’s pelvis shattered. Now he walks with a limp and takes meds. Just before I blacked out, the hood of the car pooled around the base of that tree like a melted candle. I looked over and saw Cole’s face go powder-white, and I stretched to touch his knee—crushed up against the inside of his other thigh—and decided that he was probably dead, that I’d killed him, and that my last words to him were, “Your breath stinks.”

There’s a place on the highway, not far from our crash-site, where if you turn left coming from the mall, you have to punch it, because there’s a blind spot on the right where the road curves, and you can see what’s coming for only about thirty feet. It’s a death-trap, and every time I make that turn I think, go fast, and hope nothing comes faster. I imagine that’s what Cole must feel like most of the time. He’s all right for now, but you can’t get home from the mall without taking a left onto that blind stretch, and you never know when some drunk in a red Sundance is going to come tearing up the hill.

Once when the four of us were in a department store, I split from the rest to find a dress. I went hunting all over the women’s section. I must have tried on six or seven and when I finally found the right one, I couldn’t find Cole, Alex or Jesse. I ran all over, through Electronics twice, though the baby clothes and bassinettes. Eventually I asked a red-shirted clerk to please page Cole Carter, but before she could, I saw flashing lights through the automatic doors, and an orange ambulance. I went out to the parking lot and there were paramedics loading him into the back. I flew at Jesse, brandishing my stolen dress still on the hanger. I’d set the alarm off and three clerks had chased me out.

“What happened?” is what I’d said, though in some part of my brain I was thinking progression, as if it would be an act of sudden violence and not a slow creeping defeat.

“He passed out,” Jesse said.

“Puss,” Alex said, and I wanted to punch him in his fat red face.

I don’t know why he couldn’t be like his brothers. Like the Brawny paper-towel guy, lumberjack thick and built Ford-tough. Cole was delicate: a sickly kid who threw up or passed out like it was a hobby. On the stretcher he looked like a child.

Security officers had gathered around me and were trying to haul me back into the store, but I threw the dress at them and ran towards the ambulance. I couldn’t get there before the doors shut, and an assistant manager said, “Ma’am, you have to buy that dress.”

Later at home, I put it on and stood in front of Cole, who was groggy from pills. “You look pregnant,” he said, and laughed. I scowled. But now that I am, I wear it all the time, and I can laugh about it too.

If I don’t laugh, I start thinking about final expenses. Jesse drives a school bus, Alex washes dishes. Most of what I make goes to Cole’s medical bills. I don’t know who’s going to pay for this baby either. Sometimes I don’t think I’m going to keep it, but part of me wants to see if it can draw.

If it can—I’ll push it to do something with its life. Don’t get stuck on Gool, I’ll say. Then it won’t end up working menial jobs and living in a dumpy house in a nothing little town with a bunch of losers who leave dirty flannels hanging on chairs and kick holes in the drywall when they’re drunk. And watch TV all day and sleep—all the things they do, and I do too.

Whatever I tell it, it’s bound to do the opposite.

I told Cole not to get sick, and he did it anyway. He threw up on me. I acted like I didn’t mind but trembled as I scrubbed my sweaters out in the laundromat. He lost his hair. I told him no one would miss it, but I searched his pillow for strands and kept them in a box in my sock drawer, underneath my birth control pills. Eventually I threw the pills away and kept the hair. Cole wanted to be angry, but he was too weak. Then his hair grew back. He got stronger. He’s strong even now, and I’ll be showing soon. We haven’t talked about it.

Today when I stepped on the front stoop, it didn’t feel like Gool. Everything was the same as always: Alex’s dead Mazda in the driveway, the porch swing missing a slat, empty tall-boys on the railing. A hole in the kitchen window screen. Jesse’s blank crayon face staring down at me from the highest window. I wasn’t sure if Gool was safe anymore—or if it was even where I wanted to be. As I looked at the window, it slid open and Cole appeared.

“What’re you doing?” he yelled.

I wrapped my hand around the splintered bannister. Everything was going so fast around me. People barreling around in cars and not looking where they’re going. Shops and cafes closing, new shops and cafes opening, and closing again. School ending, people leaving, new people coming—but they leave too. Things are looking different all the time and here we are unchanging, and the only one of us who is growing will grow out of this place the minute it’s here.

Maybe if I said it—it would make it so. If not for me, then for Cole.

He pointed at me. At my stomach, where my hand was.

Cole smiled. He bolstered his elbow on the window frame and rested his chin in his palm.

“You know,” he said, and thought for a long while. “Maybe he is Gool.”

So he was. Because Cole said so. That’s enough for now. 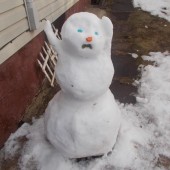 Molly Bonovsky Anderson is from central Minnesota. She studied Philosophy, Art History, and English at Northern Michigan University. Her work has appeared in Crab Orchard Review, Passages North, Penduline Press, Big Fiction, Wilde Magazine, Breakwater Review, Burrow Press Review and other print and online journals. She served as Fiction Editor at Pithead Chapel from 2012 to 2014 and Guest Fiction Editor for Issue 2.1 of Driftwood Press. She lives in Upper Michigan with her husband and son, and is fond of train whistles and lawn ornaments.