Making empanadas for the graduation party, Elena got out her forks to mash bananas for the filling. When we first arrived in Miguel Vera, I was offered a fork to eat my lunch, but later, I ate my rice with a spoon like everybody else. The day of the party, I hadn’t seen Elena’s forks in months. Ana Inés and I mashed the bananas down to a pulp and then the forks were washed and dried and put away again in that tall wardrobe, stored in the white cardboard box, slightly dented, in which they’d come from the store. Hidden under spare blankets, ponchos, shawls. I never saw them again.

I was always impressed at the care with which things were stored away, folded, layered. You had to get everything out to find anything, because there was just the one big cupboard, with maybe a drawer on the bottom. Storage meant being well off enough to have something to save, and whatever was worth keeping was preserved with meticulous attention.

The party was held at the far end of town, across the little bridge toward what had always been the poorer part of Miguel Vera. My mother had explained the differences to me, the different neighborhoods, but it was a long time before I could really tell the good part of town from the lesser. All the streets, save for the four sides of the central plaza, were dirt. The houses within a block or two of the plaza were easy to pick out: two-story, freshly painted, the windows curtained, the shutters (on the inside) seldom closed. But after that–two blocks out, three–it got trickier. The paint on the adobe might be chipped on one house, new on the next; a concrete wall beside an empty lot beside a two-story gem with a new tile roof.

This was a lower house, blue, one I’d never been into. The invitation had come so late, I hadn’t even brought a gift. (We’ll send something tomorrow, my mother assured me. Just go.) The floor had been freshly cleaned, newly dieseled. People rubbed diesel fuel into wood floors, which caught the dust in a sticky paste but gave the planks a shiny, mahogany look, and some protection against insects. It was being phased out, but was still fairly common.

The room was full of people, thirty of us, forty. It can’t have been that big, but it felt crowded, like a bus. Every chair the family owned and many they had borrowed ringed the walls. Dining set chairs, high backed, with chrome or metal piping frames, in sets of four or six or eight: red Naugahyde, gold, whitish with sparkles. Flowered, one set, in orange and brown. Nothing too dark. Nothing wooden, anywhere. Wood chairs were small and low and old and kept in the kitchen. Parties were happening all over town–it was that time of year. If this room was any indication, no one would be sitting down to dinner except at a party. All of the chairs had been lent out to neighbors or aunts.

We went around to every seated person to say hello. When it came time to leave, we would go around the room again: every single person, shake hands, hello, goodbye, a kiss, a smile. The hosts were apprised of each arrival, they knew who had been served, and what, and how long ago.

“Sit,” Ana Inés said, and left me in one of the chairs, the only vacant one, near the back of the room beside an old woman I didn’t recognize.

The old woman smiled and patted my knee. “What miracle?” she asked.

I thought it was ritual praise, purely rhetorical. I thought she meant, “What a miracle!” and I just laughed a little and shook my head, trying to be modest. Feeling modest–I was just another well-wisher, another guest. The aunt patted my knee again. The form required an answer.

“What miracle brings you here?” she asked, a little louder, as if I might be deaf. No, I wanted to tell her; not deaf, just slow.

“A visit,” I said, as if that explained anything, as if I’d found it in the official catalogue of miraculous causes. “To celebrate the graduation. It’s very important.”

There were plates of toasted corn scattered around the room, and mints. There were little bowls of hard candy and heavily salted popcorn and a plate of fresh cheese. There was a cake as tall as a picnic umbrella looming over the record player. Mothers and aunts were in the kitchen cooking away. You could hear voices and laughter and scolding from across the back patio–that’s where the real party was–and Ana Inés disappeared for a while.  They must have had cauldrons of soup out back, bathtubs. I didn’t know these people well enough to barge out after her. I had to stay where I was, polite and pleased and a little at sea.

More conversation, something like a joke, a couple of teenagers at the record player, no, not that one, play this. And then a loud cumbia that had people nodding a little, tapping their feet. No one stood up yet. That took a couple more songs. Then one of the teenagers came over to me and extended his hand, did I want to dance? Of course I did. I liked dancing by then, though I wasn’t winning any contests. But I fit in just fine. People were enthusiastic and good natured without being flashy. Not a lot of spins, no dips, partner dancing only in the sense that you stood near someone else, faced them, and danced. A few more songs, a little girl passing around a tray of the tiny empanadas. Then a couple of the other girls jumped in and started passing the tostado and the popcorn. More dancing, and then finally, late, too many drinks passed up and pushed away–I was trying so, so hard to be polite–they started bringing out the soup.

I suppose they must have borrowed bowls as well, but still people were served in shifts. One of the cousins, maybe two or three of them, must have been out on the patio, washing as fast as they could. There were no paper plates, no disposable dishes. I thought, if things got bad, if conversation lagged and I just felt too awkward, I could muscle my way into the kitchen after all and insist on being allowed to help.

I didn’t really mind going with the flow. I was happy to help when asked, and pleased to be included in those homes where the creepy air of noblesse oblige had begun to wear off and my minor assistance was finally no big deal. But I hated how the girls did all the real work while the boys fiddled with the record player. So I liked being allowed to help with the cooking and cleanup, and I resented that being the only arena in which my help was sought.

Everyone wanted to dance with me. Everyone wanted to talk. “Don’t look,” Ana Inés said, “but that guy over there, the one I was dancing with, says he’s a painter, de bellas artes, but never so many beauties as yours.”

I groaned, she giggled.

“Shouldn’t he be flirting with you, if you’re dancing together?”

Then one of the cousins brought us our soup. The broth was the kind of rich, restorative elixir that might prevent a hundred years of common colds. A scatter of chopped cilantro and green onion, potatoes in the depths, chopped carrots, a bit of meat. It smelled miraculous. I almost said that to the old woman beside me, but she was starting to doze off, so I thought better of it and just inhaled.

It was a thick broth, but not thick enough to hide three toes and a rear hook at the bottom of my bowl, pale and boiled looking, yellowish, the skin at once swollen and taut. It was a glove burbled bumpy, close to scaly (but that’s not it either), ridges, cells, segments. Rising rings. I had seen my mother offered a live chicken, when Benjamina was on the verge of twisting the neck and handing her the whole bird to take home. I had never eaten a chicken foot before, had never seen one in my soup, but I knew at once it was a delicacy, a treat. Even an honor. I screamed, but I screamed inside, silent and convulsive, the yell rippling up through my ribs like a wave. The scream rose but I throttled it, caught it in my throat like a burst of marbles from my belly, heavy, clattering, insoluble, unbreakable polished glass. I couldn’t breathe but I sucked it back down, it was a scream of movement only.

The sound I didn’t make propelled me upward, an inch or two out of my seat. I was going to spill my soup, I could see it rise, the broth tsunami sloshing up the china slope, no purchase there, nothing to hold it back. I held it in front of me the way you hold a drink on a plane when turbulence suddenly pulls the tray table out from under you and you’re left stranded. My soup was suspended in mid air. I was actively not screaming. I was medalling, at last, in the politeness decathlon, and thank god for saucers because the tablespoon that spilled just went onto the plate and of course no one but Ana Inés noticed, because no one was ever watching me as hard as I was watching myself. I had been given a treat and an honor. I was going to eat it if it killed me.

Ana Inés slid into the seat beside me, another bowl in her hands. “Trade you,” she said. “I love the foot.” As if I were doing her the favor. Maybe I was–maybe it was a win, win–but to me it felt like rescue and I accepted with thanks.

I looked down at her bowl. She, too, had scored a delicacy. The chicken’s bald head stared up at me, beaked and gleaming. 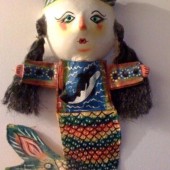 Amalia Gladhart is the author of Detours (Burnside Review Press), and translator of Trafalgar (by Angélica Gorodischer) and of The Potbellied Virgin and Beyond the Islands (both by Alicia Yánez Cossío). Recent poetry and short fiction have appeared in Oblong, Eleven Eleven, Necessary Fiction, Literal Latté, and Cloudbank. She is a Professor of Spanish at the University of Oregon. amaliagladhart.com