An excerpt by Kyle Muntz.

A blue light is shining on the world. I wonder.

There’s a girl who lives on my street. She spends her days playing violin and drinking water. Sometimes I think the whole purpose of life is maybe just to spend time drinking water.

At night, she sleeps. In the morning, she wakes. She eats water. Her downcast eyes observe without seeing: nothing lives in the world, so there is nothing to see. Her room is quiet; only she breathes in it. She sits. She plays music. The light is blue. Her room has no windows. Only she can see.

Blue light crawls over the street when I look out my window; blue light hangs heavy in the curtains when they move, when I part them. The sidewalk is made of steps and stones, that people walk on, with routine benches in it, beside buildings, and spots for light, when you can find them. People sit in the benches, and look out windows. Sometimes I watch them—that must be obvious, or I wouldn’t know they were there.

That blue light is muffled as the curtains close, when the shadows stretch, making them darker. My room contains a table, a bed, a window, and me. And water. Every day, I go swimming; excepting that, there is very little to do, so I swim often, drifting. In blue water. The world is only one color. Every morning, I look into the sky, hoping to see the sun rise. But no, there is only the moon.

I’m not sure how it happened, but I’m writing about other people.

Is that possible? I never.

There are so many.

Mr. B is a pilgrim—he spends all day reading books, listing to old jazz, eating pistachios. Wherever he goes, he is listening to music: on the streets, in parking lots, on top of buildings, in concert halls, department stores. He carries his record player and a chair on his back: mobility.

Look at this, he said, holding out a foreign object. Look closely.

It has words in it.

Do you know what they do?

When you look at them, they make things.

Do you see me?

There was a girl in my room. She sat up on my bed; curtains of light wrapped around her like part of the moon. Her face in shadow, her figure negated. The window stared, admitting blue light.

Is that good enough for us? Are we visible here?

Mr. B lives in a house without doors or windows; instead of walls, it has bookshelves, except really it has both, just they do different things, in different places, and they aren’t shaped the same. Against one wall, it’s easy to see a picture of a pyramid; and another of an old man, with three faces and sharp teeth, whistling to himself, eating a gigantic piece of watermelon.

My house is haunted, Mr. B told me.

Ghosts and shadows. Not in that order.

He put on his detective cap and started smoking a pipe.

A long time ago, he said, a family of kangaroos were murdered here. By accident, raccoons defiled the grave. Then a plane crashed into them. That plane was carrying

somebody who made wigs;

and a bunch of other people without names.

Mr B paused to take a deep breath. Later, skeletons began walking. They have voices but no vocal cords. Isn’t that fantastic?

I looked around. My neck hurt.

How did you get this place?

One day, he said, when I was going somewhere, I found it. The door was open; it asked me to come in. I got my things, put them places, and made a sandwich. I’ve been here ever since.

Oh, I said. That makes sense.

That day, in the street, I thought I saw a skull in the mist. It scowled, spat green flame, and began to wail. Like everything else, its surface shone a dull blue.

All its teeth had been sharpened to points.

Sometimes I pause to consider the things I say. It seems like they don’t make any sense, a lot of the time.

A naked girl lives in my room. She floats suspended before the window; the moon makes her glow. When I call to her, she appears to me. She is beautiful in the sense that light is beautiful.

I have a reason to be this way, she said.

Time passed. It still moved, even though I couldn’t see it.

When you consider existence, she considered, aren’t you ever afraid it will end?

You came to me out of the sky, I said. When you reach out your hands, you can cup the moon.

That isn’t enough for me.

If you can think of something—she looked up, through the ceiling, towards herself—it exists. At least in your mind, which is the only way that matters. Don’t you remember?

We don’t have to be the same. Not all the time.

To philosophize is to be defeated, more surely than a thing begins; we rolled in a glass orb defeated. A singularity amidst nothingness and water—what world is obscured, to be simply continued?

Our only thought occurred once, forever ago, to be endlessly remembered.

I saw Mr. B outside a restaurant selling top hats and coffee. He sat in his chair, reading a newspaper.

Look over there. He pointed. Do you see her?

That woman has an umbrella. She’s hitting someone with it.

It’ll be alright though—her arm should get tired soon. Probably.

This is a sick world, he said.

We’re sick, he said, but there’s no one to take our temperature. We’re freezing; the ice is coming soon.

He was right; I needed a sweater.

In the morning, when I got up, I would open the window to knock the icicles away; then I would make breakfast, and drink coffee; but I couldn’t swim, because my water was frozen. Ice had taken over my room: the entire universe was a gigantic crystal, with bright shining lights in it, of coldness. In this great solid, there was no room for movement, no energy. Brushing my teeth was nearly impossible.

All day, wearing clothes, I huddled beneath blankets. My breath froze: first a mist, then a mass of droplets that fell like miniature hail.

Even shapes were breaking down, until everything was discombobulated geometry, within an immense solid.

I had forgotten to pay the heating bill.

On the streets, I saw a big group of people, all wearing thick coats with fur lining their faces, pulling treasure chests attached to heavy chains. They were everywhere—sidewalks, rooftops, the middle of the road—all moving slowly, almost like zombies; but I could see the breath as it encircled their bodies, misting just barely, so I knew they were alive: each with head down, back bent, shoulders forward, dragging a treasure chest. It was impossible to know where they were going. Even if I were to ask, I doubted I would receive an answer.

After much effort, I thawed my room.

I’m not proud of the things I did to accomplish this.

(I got a job carrying a flamethrower around the city, melting people.

Like a kid, I jumped down a hill—almost in a sled, except the sled was my body—to slide: an immense inverted landscape, falling hundreds of feet. At the base, breathing hard, I decided I really wanted a cup of coffee. When I stood to get it, somebody (wrapped so I couldn’t see their face) came up and tackled me; and didn’t get off. If I hadn’t pushed him, I might have been buried in the snow.

What was that about?

I’m not going to describe quite what happened, but by the time I got him to stop, the other guy had a branch stuck in his stomach. He must have been afraid to take it out, because he just looked at it, and wiggled the end a bit.

I can’t tell you, because it hasn’t happened yet.

I think you’ve got the wrong person.

That isn’t possible, he replied. In all the world, there’s only one of you; and right now, this is where you are. So it can’t be anyone else.

From some direction that wasn’t ours, wind blew. A mandala of leaves let fall copious teardrops of blue snow

The bottom of the hill was a thought and a place and a color. It had two people and a bunch of trees in it.

You should probably get that looked at. I pointed at his stomach. Sorry, I guess. Even though it’s your fault.

This is nothing, he groaned. Just a flesh wound.

Someday, he said, I’ll get you.

I scratched my chin. You sound like somebody else.

It’s nothing, don’t worry about it. I waved my hand. Get out of here. You might get eaten by a bear.

That’s ridiculous. There aren’t any bears around here.

I’m not so sure. Behind him, I saw the flaming skeleton of an animal, hideously thin, extending its claws; and above that, yes—its eyes glowing green, drool frozen around its mouth—the head of a bear. No mammoth sounds of it; there are fields in this country. Each field we pass smells of sewage and cranberries.

I was walking through the inside of a school and met Mr. B there too—I could tell it was him because I could hear really loud jazz from down the hall, miles outside the building. Today he’d brought a table with him. He was reading a manual about how to dissect octopuses, and Proust.

There are already enough Frenchmen in the world, he said. In France.

Somebody walked outside the room, holding their ears, which had begun to bleed. I wondered if they would be deaf, later. Mr. B told me that I should be afraid of octopuses.

You were right, I said, about the weather.

What do you expect? He laughed. The sky can only go so long without a moon.

The naked girl took a bath, whirled in steam. Her shoulders faced me. Because of the bathtub, I couldn’t help noticing that her skin was the color of porcelain—and for the first time in the history of words, it was finally true.

What do you think? she asked, turning. When I reflect the light like this, does the room easier to see?

She lowered her eyes. What are you thinking about?

Snow shovels. When they have snow in them, they’re really hard to lift.

Are you angry with me?

You’re lying, I can tell.

I told you before—you can stay as long as you want. It doesn’t matter what happens.

It can take care of itself, I said.

I repeated myself, but I have no idea if she believed me. (I don’t think so.)

Up in the sky, the moon began to move; I couldn’t believe it. 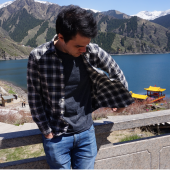 Kyle Muntz is the author of Voices, (Enigmatic Ink 2010), Sunshine In the Valley, (2011, Civil Coping Mechanisms), and VII (or) The Life, Times and Tragedy of Sir Edward William Locke the Third: Gentleman (Enigmatic Ink 2012).