Ma is always a half-full kind of gal, as she herself has always said. Not glass half-full optimist, but half full of it. In her youth, she cherished dreams of soloing big time, à la Lily Tomlin. She did standup comedy until some dude stood her up and left her in the lurch. “This is what a lurch looks like,” she used to tell me, sweeping her arm to indicate the tiny Upper West Side walk-up that I have called home ever since I was old enough to say the word.Ma was in her thirties then. Now she’s on her deathbed in Beth Israel. She’s come to specialize in geriatric jokes. “Esther ran into Mary the other day,” she tells me. “Peered at her a good long time. You know her memory’s not so good anymore. Then confessed, ‘help me to remember,’ she said, ‘was it you or your sister who died last year?'”

I smile, because if I don’t, Ma will furrow her wracked brow, say “Whazzamatter, still don’t know a joke when you hear one?” and commence to cough, which I cannot stand. It sounds like her bones are breaking to tiny bits that will be ejected along with the ghastly green effluvia and bloody red clots that come up and bloom into the ghost white tissue she valiantly holds to her mouth. Ma has always prided herself on being a role model. She always covers her cough.

“Oh, and did you hear about old George Tompkins?” she goes on. “Finally kicked the bucket at 135.” She pauses.

“Died of shock when he heard his grandfather was dating his ex-wife.”

When I was growing up Ma would practice on me, always looking for the day she’d get a chance to audition again. If I had friends over, she’d corner them and do her whole routine, starting with the guy who tells his friend to meet him at the corner of Wait and Walk, ending with the one about pessimist and optimist boys: one is presented with a pony and can think only of the inevitable and distasteful stall cleaning that will be necessary while his happy brother, placed in a room full of poop, is convinced that a pony has to be nearby. “Your mom’s a million laughs,” they’d tell me, and they’d never come back.

As I grew older and less responsive she decided I was a hopeless sidekick and installed a series of dogs in the household to replace me as straight man. She named them after the theaters she dreamed of playing in: Biltmore, Plymouth, Helen Hayes, Shubert. She taught each of them to sit attentively when she told a joke and bark happily the punch line. Shubert is the current shill-in-residence. He’s a Jack Russell-poodle mix the pet store called a terri-poo but mom calls a Perrier. Shubert, she likes to say, is a cockeyed optimist, unlike me. They don’t let dogs in the hospital so she’s had to make do with a pessimist as her captive audience again.

She’s on a roll now. “Three older friends, we’ll call them senior citizens, are shooting the breeze and talking about what ails them. ‘My memory is really going,’ says the first. ‘I find myself standing in front of my refrigerator with the door open and I can’t remember if I’m hungry and looking for something to eat or if I’ve just finished putting away leftovers.’

‘I know exactly what you mean,’ says the second, ‘I’ll stop to rest on the stair landing and forget whether I was going up or down.’

“‘I’m very lucky,’ says the third. ‘My memory is as sharp as ever, knock on wood.’” Ma punctuates this with three sharp taps of her knuckles on the hospital tray. “‘Oh, there’s someone at the door! I’d better get it.’”

Behind me, I hear laughter and turned to see the nurse in the doorway. “Time to check your vitals,” she chirps.

As she bends to place fingers on Ma’s pulse and time her heartbeat, a tear rolls down her cheek. Recovering her composure she says, “Your mother slays me. She just kills me. She should be on Broadway.”

I tell Ma goodbye, that it’s time for her to get some rest and for me to walk Shubert, but she hardly notices. She’s found a warmer house to play to. “I ever tell you the one about the young wife who was making a ham for dinner?”

Shubert greets me at the door with the exuberant hope and joy that is the trademark of small dogs with small brains. He knows, like the boy in the room full of shit knows. He just knows. There’s got to be a pony around here somewhere. 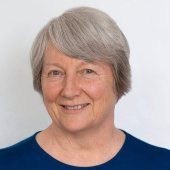 Jan Maher’s writing credits include a novel, Heaven, Indiana (2012 finalist in the Eric Hoffer Book Awards, Legacy category); the plays Ismene and Intruders; the documentary play Most Dangerous Women and books for educators Most Dangerous Women: Bringing History to Life through Readers' Theater; and History in the Present Tense: Engaging Students through Inquiry and Action. Her short stories have appeared in numerous online and print journals.