He Plays the Harp “How many kids do you have?”  It is a perfectly innocent question. It comes up when I meet new people and goes with equally harmless questions including, “What do you do?” “Where do you work?” “Where do you live?”

I always say yes to the kid question because I have two children. Follow up questions are where things get dicey. “How old?” or “Boys or girls?”  I say that Noah is seventeen years old. He died at seventeen and he stands still there. As each year goes by without him, I grow older and he remains young. His sister, our adopted and former foster child, is also seventeen. This complicated things for a year, but she will move on. I imagine being sixty years old and the amazement and wonder of people when people ask me about my kids and I tell them I have a seventeen-year-old son. Perhaps when we’re older, strangers don’t ask about kids anymore.

People who are well meaning or simply unaware tell me about their seventeen-year-old sons and daughters too—where they’re planning to got to college, what high school sports they play and their extra curricular activities.  They inquire about Noah’s interests, too. This presents a dilemma. I have to make a fast, instinctive decision about whether to drop the “my child died” bomb or to play along in a mysterious and evasive manner. My mental checklist plays out like this:

Sometimes, though, my indecision or procrastination about what to say puts me on a collision course with truth. I was at a conference less than a year after Noah died, and over cocktails, a curious woman from an Eastern state asked about my kids.

“My son is seventeen,” I said.

“So is my son. I’ll bet he’s using your car and driving all the time now. My son is constantly gone,” she said. I nodded. Noah’s disability (cerebral palsy) prevented him from learning to drive (and walk, for that matter) so I couldn’t relate. I agreed, though, that driving was a source of motherly angst. She asked about Noah’s other interests and activities. “What is he taking in school?” “Does he play any sports?” “What extra curricular activities is he into?”  “Does he have a girlfriend?” She was giving me a bad feeling and I didn’t want to tell the truth about Noah. I just didn’t need the emotional interaction that comes when I say, “My son is dead.” Saying this always evokes an emotional reaction. Instead of telling her he was dead, I told her what I envisioned for his life had it not ended before our parental dreams could be realized. I took a sip of my martini and then took a deep breath.

“He’ll be going to the University of Michigan when he graduates.” My husband Mike and I loved Ann Arbor and had always imagined that Noah would go to school there one day. I faltered at his potential vocation—he’d always liked animals and space. I pondered whether to say veterinarian or astronaut, I wasn’t sure if Michigan offered majors in either.

“He plays the harp,” I said. Where did this come from? I thought as I said it. A harp?

“He’s a good Catholic and he’s very close to God,” I said. My mouth and my imagination were working overtime.

“Is he considering the priesthood?” she asked.

“Yes, the priesthood is an option.”

She stopped and didn’t ask about about his girlfriend.

I took something from that encounter. When people start asking about my kids, I deflect their inquiries and move right to their kids, posing more questions than a police interrogator. When I’ve done a good job, I’ve asked enough questions so that people are either exhausted or so charmed by my interest that they don’t ask a thing. Truthfully, I enjoy hearing about other people’s kids. I understand the struggles parents face and the interesting choices young people, Noah’s age, are making at this critical juncture between childhood and adulthood.

I’ve learned that not being honest about having a child that died leads to unexpected complications. I went for a pedicure while on bereavement leave. I purposefully made a weekday appointment, expecting there would be fewer people at the salon than on a Saturday. I wasn’t interested or able to make small talk with a stranger in the next pedicure chair when so much had happened to me just a few weeks before. I sat in the chair, leafed through a People magazine—looking at celebrities with youthful, carefree faces and problems that were really not problems at all. Erin, the nail tech, did a fine job on my feet, which are rough from daily running. She said very little, just some friendly small talk and I responded politely. Years later, I continue to see her every six weeks and now we’re so far down the road I don’t even know how to broach the subject of Noah. “Oh and by the way, my son died five years ago and I always meant to tell you.”  She knows a lot about my life, the work I do, my marriage, our travels, my running, and my political views. She knows about the struggles with our daughter and I know about her challenges with her two adopted kids, too. I consider her a friend. Yet this one big thing, the most significant event in my life and I’ve never found the right moment to talk with her about it. When I put my feet in that bowl of soapy hot water for the first time, I never thought it would lead to this complicated sin of omission.

Imagine if there were a word for parents of kids who have died. People who lose a spouse are widows or widowers. When someone asks, they say, “I’m a widow.” Everything is instantly clear; we know this person has lost a spouse and they are possibly grieving. There is no doubt about what has happened. Orphans, too, have their own word. There are people who when asked about their parents, might reply, “I am an orphan.” Or “I grew up as an orphan.”  Even the term “motherless daughter” is commonly used to describe girls or young women who lose their mothers to death before adulthood. These special words clearly tell the specific life circumstances of a person.

Parents with children who have died don’t have a word. I’ve tried to see if there is anything in etymology that might be adequate. Viduus in Latin, from which widow comes, from ‘bereft’ and ‘void’ as its origins. Bereft is part of it, but being deprived of something loved or valued just barely begins to touch the death of a child. In Sanskrit the word viloma could be used to describe us. It means ‘out of the natural order of things’ which child death certainly is. I’ve tried to create a new word, thinking perhaps I could start a movement of parents who also feel the need, but I can’t even land on a good definition, much less a word. I want one word that expresses the overwhelming sadness, absent dreams and unfinished stories that parents experience when a child we created, brought into the world and love deeply, still, is gone from our lives forever. 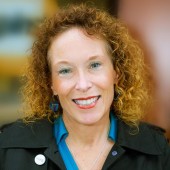 Roberta F. King lives in Muskegon, Michigan and is the vice president of PR & Marketing at Grand Rapids Community Foundation. Outside of her professional PR writing, her articles and essays have been (or will be) published in Boiler Journal, Hippocampus, Atticus Review, The Rapidian and Solace magazine. She is working on a memoir about her son, Noah. www.robertafking.com